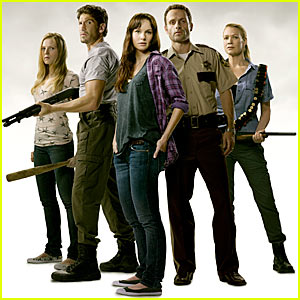 Three episodes in to "The Walking Dead", and each time they have upped the ante on the moral dilemmas the  upcoming Zombie Apocalypse would provide to each and every one of us.
So, to start things off, we still have the missing little girl Sophie in the woods somewhere, the little boy Carl is suffering from his bullet wound, and the cast trying to make it through another day.
But the main thread of the episode was the run Shane made with the relative stranger (and guy who accidentally shot Carl), Otis.  They made a run to get medical supplies at a nearby high school.
In the ensuing mission, both Shane and Otis' ankles were injured, slowing them down significantly.  Initially working together, the two were doing alright in spite of the odds.  Both wanted desperately to help the little boy, with Otis specifically stating that the danger didn't matter to him, as he wanted to make right by Carl.
On their run back to their escape vehicle, Otis showed his weakness that he was not only working with an injured ankle, but was also out of shape.
With the walking dead closing in on them, Shane felt he had to make a choice.  Knowing he had to get the supplies back to the hideout, he put a slug in Otis' leg, took the supplies, and left him to be devoured by the dead.
When he returned, he told most of the story about how Otis died, and the kid got the medical equipment and remedies needed for the vet-turned-surgeon to save Carl, which he did.
People had a problem with Shane's choice.  In fact, I did, too.  But you have to put things in perspective.
Shane might not be the kids dad, but he clearly has a strong emotional tie to the boy and his mother, Lori, who he was banging out for a time before Rick returned.
After talking it over with a friend, we have to come to terms with things.  In fact, its a clear theme that I have explored in my books, especially "The Fall of Austin".
The Z-poc brings about a shift in morality.  A 'Rule Change' as I like to call it.  In fact, rules are thrown out the door, and the only rule is 'survival'.
Shane had no emotional ties to Otis.  Shane needed to get that equipment to the boy he cared deeply about.  Knowing Otis was wounded and was holding him back, he had to make a hard choice.  Do I roll the dice and help the injured Otis and take a chance I won't make it back?  Or do I cut my losses and give myself the extra edge to guarantee I get back?
If Otis were a close friend or a family member?  Sure, you spin the wheel.
But he wasn't.  Shane made the call, and now has to live with it.
Here it is in even easier terms to understand:
What would YOU do if you knew your own child's life was on the line?

Sex in the zombie apocalypse.
A cold war fantasy returns in the Zpoc in Episode 4 recap of "The Walking Dead"
http://zombiebloodfights.blogspot.com/2011/11/zombies-recap-walking-dead-cherokee.html

The ultimate zombie weapon:  Cheap and easy to use.  Get one today.
http://zombiebloodfights.blogspot.com/2011/08/zombies-flanged-mace-new-ultimate.html

Zombies vs. Tasers:  An excerpt from "The Fall of Austin" by Bowie Ibarra
http://zombiebloodfights.blogspot.com/2011/08/zombiesblood-and-tasers-excerpt-from.html

Bowie V. Ibarra is the author of the Zombie horror series "Down the Road" from Simon and Schuester and Permuted Press.  His upcoming book, "Big Cat" is about the power of friendship in a town where a monster is murdering the citizens of the city in the woods outside of town.

Learn more about Bowie and order a book at http://www.zombiebloodfights.com
Posted by Bowie Ibarra at 9:53 AM