It was pretty much WWE going 'lets return to the status quo, back to what everybody hated before' so they can pander to the people who are only going to stick around for 'mania and abandon them for the remainder of the year.  Ah, well, it had its moments.

It was about two Rumbles ago now that Del Rio won the entire event.  And at that event, he was the 'Mexican Aristocrat' that was a not-so-subtle angle similar to the immigration issue that was at the forefront of politics at the time.  Now, with the issue being buried and only recently resurrected again, it was a good time for Del Rio to be a smiling good guy.  Either way, I've been a fan and will always be a fan.

Del Rio and Ricardo Rodriguez made show look stupid by taping his leg to the ring rope and having Del Rio humiliate him, taking the victory.  But Del Rio paid a steep price for it on Raw the next day.  We'll see how this progresses on the road to 'mania.

It was a good time.  I didn't mind it, and thought it was better than last year.  Here are some notable moments:

-  Jericho returns at the number 2 spot - My buddy Brandon Stroud made sense of it on his review (which you need to read and follow to get his great 'Best and Worst' blogs).  But for me, it was just whatever.  He showed up before, and I thought it was cool.  But then he bailed afterwards.  I support him, bought the DVD, etc.  I just hope more comes from this run than just getting a check to finance his rock career.

-  Goldust vs. Cody Rhodes aka Brother against Brother - It was a confrontation the Twitterverse was calling for for years, and it went down finally at the Rumble.  It was great, with Cody getting the advantage on his brother and throwing him out.

- Cena wins Rumble - And, for a minute there, I thought someone else was going to win.  This has definitely turned into a Hogan 'I'm sick of you always winning' run.

Wild match up that ended strangely.  But it started strong, with Punk getting in the Rock's face with the title and the announcement like a pro-boxing title fight.  That was cool.

-  Rock 'breaks the count'  - I have to admit, I absolutely positively 'LOVED' Rock going old school and breaking the refs count during some crazy action outside the ring.  I wish I could see this more these days.

- Heyman needed to help pace Punk - I was upset at all the highspots Punk was taking to defeat Rock.  Lots of top rope maneuvers were killing me and taking a toll on Punk.  He grabbed at his knee several times, a clear sign he was not at 100%.  I've had knee surgery and it sucks.  It also takes time to heal.  I didn't want to see Punk re-injure it.  And for that, I felt Heyman needed to pace him on those risks.

- Rock wins WWE Title - Rock calls off McMahon, who wants to strip Punk of the title with no definitive evidence of The Shield interfering, and gets back into the match and wins it.  I have to admit, I was okay with that, because Punk taking the win that way was kind of crappy.  I hoped he had enough to put a hurting Rock away, but a healthier and stronger Rock got the best of a recovering from knee injury Punk.

Considering that, I would have liked to see a 100% Punk against a 100% Rock.  I think Punk not having a match that pushed him like this one, a tune-up match so to speak, really played to Rock's advantage.  Rock's a beast when it comes to training, and even though he'd not been in the ring for months in a match like this, I think his strength, conditioning, rich WWE main even experience, and healthier overall fitness helped him out.

You got to respect Punk's title run, which is the longest run in recent memory.  And you've got to respect him stepping into the ring running on half a tank to defend the title he earned, loves, and has shown the most respect to.  Rock was just too much for an unhealthy Punk, and he takes the WWE Title down the road to WrestleMania.

You can network with Bowie and explore his other titles at his personal website, ZombieBloodFights.com.
Posted by Bowie Ibarra at 7:50 PM 2 comments:

ZombieBloodFights.com is an avid supporter of the Texas Indy scene.  Author Bowie Ibarra participates in the hallowed tradition of rabid wrestling fan as often as he can, making many friends along the way.

Recently, TNA Impact Wrestling has given independent standouts from across the nation the chance to have a contract with their nationally televised product.  Many names from the Texas Indy Scene are on the voting list.  Say what you want about TNA, but if you consider yourself a fan and want to see the wrestlers you enjoy earn a good payday that's more than $25 bucks and get exposure they deserve across the nation and the world, then you need to vote for them.

This blog is dedicated to members of the Texas indy scene who have chosen to participate in the TNA Gut Check.  Below you will find the wrestlers who ZombieBloodFights.com endorses.  If you are wondering who to vote for, this is the place to find an answer.

The participants are split into 16 brackets and randomly thrown together in what amounts to a popularity contest, with the winner from each bracket picked as the winner for the bracket and entered into the competition.  With all the fans I see at events, there's no excuse for the following people to not be the top winners of their brackets.  I just hope the idiots at TNA don't go against the fans decision like they did when they asked us to vote who the champ should be:  Nigel McGuinness or Hardy.  Nigel won, but Hardy got the shot.  Stupid asses.

Anyway, I encourage you to vote for all of the people I've listed below.  Here is the link to vote:  Gut Check Voting. 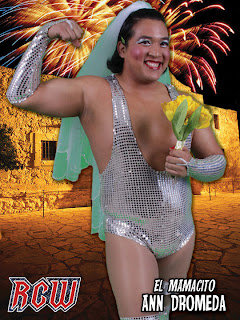 Christopher Valenzuela has been the backbone to one of San Antonio's most dominant wrestling promotion:  River City Wrestling.  Known as Don Juan at first, he eventually took on the persona of Ann Dromeda, one of the most popular, charismatic, and skilled pro-wrestlers to ever grace the Texas Indy scene.

I'll never forget realizing how talented she was when I watched her wrestle JoJo Bravo a few years back.  Chris has charisma, charm, and true pro-wrestling skill that easily sets him apart from other competition.  If you cast one vote, do it for Ann Dromeda/Christopher Valenzuela, who receives full-ZombieBloodFights.com endorsement. 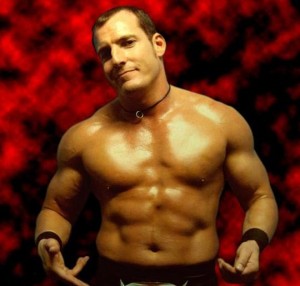 Another Texas Indy stalwart has been Micheal DelaVechia, or 'One Man' Mike Dell as we might know him.  The guy has the bad guy looks and physique to make him a superstar if the public were to see him.  He loves talking, loves himself, and actually has a bit of a brain, too.  He's posts constantly about his schooling.

The guy is a complete pro-wrestler and deserves a spot on the Gut Check.  Full ZBF.com endorsed.

A female who has been on the scene in Texas and around the country is Adrienne Reece, otherwise known as Athena.  Skilled, great looking, and talented in the ring, Reece brings intensity and skill a Skandar Akbar-trained wrestler will.  And her 'O-Face' finisher is one to behold.

Vote for her now. 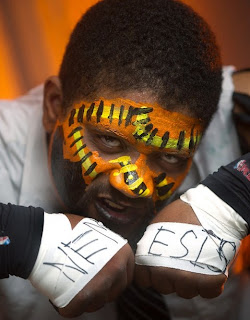 Texas fans know him and boo him as the obnoxious and disgusting Nemesis.  But all that aside, the guy has wrestling chops.  I might not like to cheer for him when he wrestles, but he deserves a chance to shine on the big stage.  Vote for him.

San Antonio fans know him as 'Honkey Kong', the RCW newcomer.  A big guy, he's been saddled with a silly gimmick.  But what I've seen from David is a true commitment to his character as he builds his skills.  He's new, but he's doing what it takes to take a step in the right direction.  Give him a vote.

Greg Webster is known to people in SATX and ATX as 'Too Much Metal' Gregory James.  The guy is quick, athletic, and energetic, and deserves a shot to grow with TNA.  Vote for him.

Readers of ZombieBloodFights.com have also recommended the following Texas Indy standouts.  I do not have knowledge of their abilities, but readers vouch for them.  So vote for them.

Readers, if you love your indy pro-wrestling, then there's no excuse not to go out and vote for these people who you enjoy when you go see them.  Without sounding cliché or like a DVD disclaimer, they put their bodies on the line for our enjoyment, for us to cheer or jeer.  They deserve taking 2-3 minutes out of our day to vote for them so they might reap some benefits from the career field they have chosen to pursue.

So vote for the people above, then share this blog with others who need to vote.  Do it today.

You can network with Bowie and explore his other titles at his personal website, ZombieBloodFights.com.
Posted by Bowie Ibarra at 8:54 AM 3 comments: