ZOMBIES - Family pain in the Z-Poc from an excerpt from "Down the Road: On the Last Day" by Bowie V. Ibarra 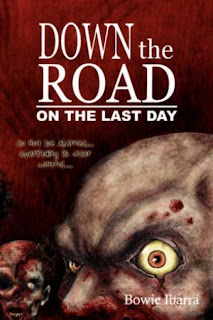 (From the first chapter of "Down the Road: On the Last Day" by Bowie V. Ibarra.  From Permuted Press.)

Enjoy the story?  Get your copy today in paperback or Kindle here.

Bowie Ibarra is the author of the "Down the Road" zombie horror trilogy, available at ZombieBloodFights.com.  His latest story, "Codename: La Lechusa" is a superhero action story featuring a single mother who moonlights as an assassin.

This has been a ZombieBloodFights.com Production.
Posted by Bowie Ibarra at 12:34 PM