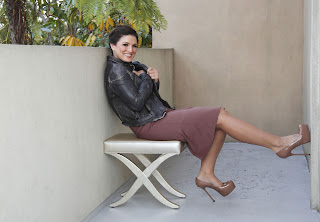 You've seen the previews.  You've seen the action.  And you're about to see Gina Carano make her way from the steel cage to the silver screen January 20, 2012.

A fun article from the most awesome website With Leather by Brandon talked up her upcoming movie role with a photo shoot for a GQ.  You can check out the write up and those pics here.

The article and the trailers got me thinking about the other 'tough girls' we've seen in cinema.  Jennifer Garner had a run in the TV show 'Alias' and movie 'Electra'.  Angelina Jolie as Laura Croft: Tomb Raider.  And others like Halle Berry, Uma Thurmond, Michelle Rodriguez, and even Jessica Alba, just to name a few.

Now these ladies did pretty good in their roles in big budget action flicks.  They got to perform next to big names and make big bucks.  But truth is, though they had to commit themselves to strict (in a Hollywood actor sense of 'strict') physical regimen, they are still actresses who did a good job honing their acting craft by committing to working out, training in some martial arts styles, and being in 'fighting' shape for the role.

There have also been martial arts ladies that have made it to the screen, but without the budgets, script, or strong supporting cast.  Cynthia Rothrock made many martial arts films as early as the 80s through the 2000's.  She's got legit martial arts talent.  Even 'Mouse' Krasnoo, prominently featured in the early UFC shows as a 'fan' in the crowd had a short run in martial arts movies.  She has some legit martial arts street cred as well.

Now, we're talking martial arts women here in the west operating in low budget movies.  Michelle Yeoh and Ziyi Zyhang made some bones here in America, but they got their start in China, like Jackie Chan.

But Gina seems to be the first American woman with legit martial arts skill comparable or better than Rothrock in her prime to have such a massive movie deal with such a star-powered cast that didn't have to go overseas to get a movie.

In my humble opinion, if this movie pays out to the studios well, I think Carano is poised to be the next big time female action heroine on a level like Stallone or Schwartzenegger.  And the first female since Rothrock to actually have real martial arts credibility.

Sure, there's been many guys from combat sports to make a run at movies as far back as Roddy Piper in 'They Live'.  Even further back, Olympian Johnny Weismueller played Tarzan back in the day.

Most recently, combat sport legend Randy Couture was in 'Scorpion King 2', Kimbo Slice has made several movies at this point.  And Dwayne "Rock" Johnson is getting paid big money before and after his run with Disney.

But Carano's a unique mix of looks, true skill, and acting.  And considering the first five minutes of the movie that's been released, they're actually giving her lines of dialogue.  That's saying a lot, considering most athletes are given minimal dialogue.

Guy fighters to movies are a dime a dozen.

You can see the first Five Minutes of the film here.

Read the ZombieBloodFights.com review of the action movie here.

Let us not forget one of the greatest women in martial arts movies that opened the door for Gina.  Check out the Cynthia Rothrock retrospective with ZombieBloodFights here.

You can also network with Bowie at his website, ZombieBloodFights.com.
Posted by Bowie Ibarra at 3:10 PM