With any pop culture wave, you're going to get a string of similarly-themed products or services.  The Zombie wave is no exception.

If you're a zombie enthusiast, you've probably noticed a slew of zombie books, movies, comics, and any other product consumers (no pun intended there) would appreciate.  If you've checked out the movies, you might find a good zombie movie is hit or miss, especially if its not from a big studio.  But even that's not a guarantee sometimes.

But director Ryan Thompson, in conjunction with Phantasmal Pictures and Monroe Studios put together a pretty solid zombie apocalypse movie called, appropriately enough, "Zombie Apocalypse: Redemption".  ZombieBloodFights.com had a chance to check out the movie, and thoroughly enjoyed it.  Here's the scoop:

An opening title sequence gives us the set up, that the zpoc was attempted to be countered by the US and the Communist Russians with nukes.  In short, it didn't work out so well, and the world was wasted and zombies still were around with some humans.

The movie opens with a dude named Knox being dumped in the middle of a desert by a scruffy old man.  The man claims he's doing Knox a favor by leaving him in the desert to die.

Handcuffed and gagged, Knox proceeds to utilize his hands and first takes off his gag.  He then goes all Bear Grills survival man.  He ties the bandana and then takes a whizz on it before putting it on his head, SurvivorMan-style, to keep from getting baked in the desert.

After killing a man camped out in the desert who was on his last leg and begged for death, he is discovered by a group of scavengers led by a woman named Sarah.

Things didn't quite work out for the guy that 'saved' Knox, as he was tied to a stake by a guy who reminded me of Sam Kinison as Torquemada.  This guy ends up burning the other dude at the stake, classic Inquistion style, to the cheers of a group of mauraders that look like they just got back from visiting ThunderDome.  It is the post-apoc, after all.  They've made a home base in a church, and they work for a man named Rome, who ordered the murder of the traitor for setting his rival, Knox, free.

When Knox recovers, he is questioned by Moses, played by Fred Williamson, the noted former NFL footballer and star of "Black Caesar", "Hell Up in Harlem", and featured in "From Dusk till Dawn".

Moses and his band of survivors don't trust Knox, including a woman named Sarah, who takes issue with him when Knox takes the initiative to shoot scouts from Rome's team of mauraders.


On the trip, Knox and Robert have a discussion on where they should park the vehicle, front or back of the store.  Robert wins the discussion by KO'ing Robert and parking in the back before they resupply.

As they are about to leave, the Cien Fuego luchadora leads her team passed the store and end up stopping to check it out.  With nothing but the element of surprise as an advantage, the three survivors take on the Cien Fuego contingent.

As the numbers game starts to get the better of the three, a mob of zombies jumps the Cien Fuego team and gives Knox and his friends the chance to run.  Robert drives in for the save.


Naturally, Rome is pissed and leads a hunt for the survivors.  While Knox and Robert are out on another supply run, the survivors at the camp get jumped by the raiders, who wreck shop in the camp.

Moses tries to get the advantage with a secret weapon, a mini-gun, to no avail.  The camp is overrun and everyone is captured or killed.


Meanwhile, back at The Cathedral, Rome has made Sarah yet another slave to his insatiable lust.

When they get to The Cathedral, they are asked to open the footlocker.  They do, and it reveals weapons.  Pretty good hiding, Knox.

Robert and Lucas get their best maurader disguises going, with Robert looking like the bastard child of Snake Plysken.  They make it in, and set Knox loose.  To provide a distraction for Knox to find Moses, Sarah, and the rest of the fun bunch (as well as set C4 to blow up the Church), Robert and Lucas get into a fight in the church commisary.  But they are soon revealed and captured as 'traitors' to be burned by Sam Kinison. 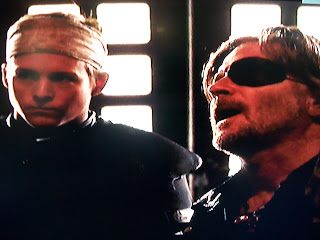 Knox finds Sarah and learns the location of the rest of the folks when Rome arrives.  There's a wild fistfight and gun battle in the pews up in Rome's lair, the choir loft.  Rome ends up hanging to death off the loft before having his crotch and leg blown off from a grenade Knox put in his pants.

As Knox runs off to find Robert and Lucas and free the people, its a hot girl throwdown as Cien Fuego takes on Sarah.  Yes, that's right.  And after a struggle, Sarah ends up giving Fuego the Jabba treatment and choking her out with her chain.