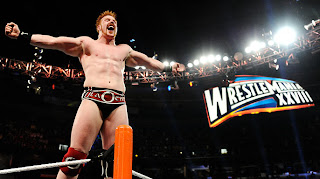 Like pilgrims to the holy land, pro-rasslin' superfans began their individual walks on the 'Road to Wrestlemania'.  The walk begins in earnest at Royal Rumble.  30 WWE stars were set to throw down for the chance to main event at the Granddaddy of all pro-wrestling events.  And ZombieBloodFights.com took in the show and had some fun with his brethren at Fatso's in San Antonio, Texas.
WORLD HEAVYWEIGHT TITLE MATCH
BRYAN DANIELSON (C) vs. MARK HENRY vs. BIG SHOW
Jack Briscoe.  Dory Funk.  Ric Flair.  Harley Race.  Bryan Danielson.
Danielson has been a little overenthusiastic over the past few weeks, and has not been making many friends.  Two people who have big beefs with Danielson were Henry and Show, who were going to settle it all in the cage.  I thought it was a good match, but as usual, I thought it needed blood.
Yeah, its an old complaint.  But it rings true every time.
Let's face it.  Cage matches need blood.  And thought this match was enjoyable, that was the only thing it needed.
Danielson retains the title.
DIVA'S 8-WOMAN MATCH
PHOENIX/NAT/BELLAS vs. EVE/KELLY KELLY/FOX/TAMINA
The girls threw down in an amusing diva's match.  I thought one of the best parts was a moment when Phoenix went for a tag, then on the way out, slapped the crap out of Eve(?).  She also swatted Bella I on the shoulder to tag herself in to smash Kelly Kelly with the GlamSlam.
Phoenix and her team of Divas takes it.
'FUNKASAURUS' BROADUS CLAY vs.DREW McENTYRE 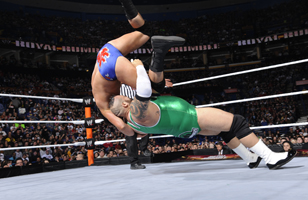