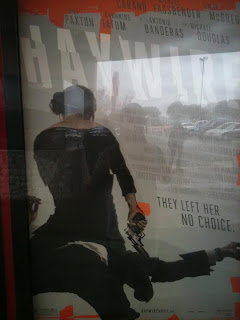 In brief, the story is a traditional secret agent gets double-crossed storyline.  The movie opens with one of her buddies trying to pick her up at a upstate New York cafe.  Mallory, played by Carano, has been on the run, and doesn't trust Aaron, played by Channng Tatum, who comes to pick her up.  There's a great fight in the Cafe before she commandeers a car and its owner and runs again.

The backstory is then told to the passenger, and we get to watch how the story played out.

In short, she went on a job to free a hostage.  But there was much more going on behind her back that comes to the fore when she finds the hostage dead on a different job.  It's was a job her handler told her was supposed to be a cakewalk, but turns out to be one in which he wanted to have her killed.

She eventually puts all the pieces together and finds out who the person was who wanted her dead.

The movie has some strengths, most notably Carano herself.  The director, Steven Soderbergh, mentioned how powerful a presence Carano has on screen.  He was noted as saying he could, "film her running all day." You can see that Soderbergh loves her, as well as the camera.  Tight shots on her dark eyes bring out the strength of her soul.

His camerawork was also great.  There were very beautiful shots and pictures featuring her running across rooftops in Europe, as well as general wide shots of the environment that painted very pretty pictures.

One of the best parts of the film is the soundtrack. It seems as if they used a jazz band straight out of a seventies action exploitation film that really added a great flavor to the film.

I expected the star-powered cast to mail it in, but they didn't.  Everyone put in their best work with her, with Ewan McGregor, Micheal Douglas, and especially Micheal Fassbender supporting her in their scenes.  Everyone provided their best with the script they had, especially Ewan.

But the real strength of the movie, the fights, were not put on display at the end as much as they should have been.  In fact, I was sorely disappointed there was not some kind of 'boss fight' to finish the movie.  There was good action at the beginning and middle, but somehow it all began to slow down at the end when it should have been running in 5th gear by that point.

The fight on the beach with Ewan could have been better.  There's a hilarious moment when he tries to run away from her by climbing up a rock.  Ewan has the ability to be more physical, and as one of the last fights, it was just alright.

I think a lot of the budget was put aside for the actors, which is fine.  A good action movie doesn't need big explosions or CGI to be awesome.  Look at the great martial arts movies from Hong Kong, for example.  But the centerpiece of the movie, the fighting prowess of Gina Carano, needed to be the strong finish to the movie that fans were expecting.  Hell, if you need to cast Richard Norton to run as the heel, then bring him in.

I'm a big proponent of the classic dramatic structure being at the heart of a good story.  The action should always be building to something big at the end.  But this movie ended with a chuckle, and not the thrill of a final fight.  It doesn't need to be the good guy running over the heel in a hovercraft on a golf course.  But give me that final fight, that resolution.  Let me see it.

That was my biggest letdown.

In short, Gina did fine.  With a supporting cast to keep her looking good, and with the physical skills for a good fight, the only thing this movie lacked was a strong finish to the script.

In short, if you support Gina and martial arts in general, show up this opening weekend and give your support with your dollars.  She needs another movie deal.

If you don't, wait for it on Redbox and watch it before you get passed the 2-3 dollar mark.  Spend the remaining 5-6 dollars you would have spent on a ticket for beer or soda and snacks.  Then, instead of going to the movies, go rent or watch a Cynthia Rothrock film like "Yes, Madam/Police Assassins" or "Magic Crystal" on YouTube.

====================
Agree?  Disagree?  Use the 'Tweet' and/or 'Facebook' buttons below to share with your friends and see what they think.  Leave a comment as well, and follow the Blog if you're on Blogger or Google+
====================
Bowie Ibarra is the author of the "Down the Road" zombie horror series from Permuted Press and Simon and Schuester.  His upcoming work, "Pit Fighters: Baptism by Fire" is a mixed martial arts action adventure story. His other story, "Codename: La Lechusa", is a story similar to 'Haywire' about a single mother who is also an assassin by night.
You can network with Bowie and read about his books at ZombieBloodFights.com.
Posted by Bowie Ibarra at 2:42 PM