ZOMBIES/BLOOD/FIGHTS - Excerpt: 'Sword of the Angel' delivers on all levels

IT'S A HIGH-STAKES LUCHA vs. ZOMBIE BATTLE IN THE LATEST TITLE FROM ZBFBooks.com!
by
Bowie V. Ibarra 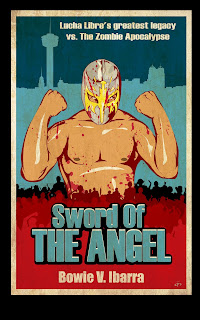 The latest title from ZBFBooks.com (The shortened and official website of ZombieBloodFights.com) features everything this blog is dedicated to:  Zombies, Blood, and Fights!
Here's the synopsis:
LUCHA LIBRE’S GREATEST LEGACY FACES HIS GREATEST CHALLENGE

Espada del Angel was the greatest luchador who ever graced the squared circle in Mexico, the birthplace of lucha libre. His matches filled arenas, and his trophy cases are filled with the masks of defeated foes.

When he retires, he grooms his son to carry his mantle into the future, securing his legacy as one of the greatest in lucha libre history. His son goes on to perpetuate his father’s tradition of lucha excellence as Espada del Angel, Jr.

But as times change, the perception and respect for lucha libre by aficionados fades. Mixed martial arts takes its place as the premiere combat sports style of the new millennium. Espada del Angel, Jr., then faces a philosophical and personal dilemma: should he continue to excel at his sport, or should he retire to prevent further tarnishing his father’s legacy under extreme criticism and ridicule?

As he reaches a crossroad in his spiritual quandary, the greatest terror the world has ever seen sweeps the streets: The zombie apocalypse!

Will Espada, Jr. be overrun along with his fans by the zombies assaulting the city that is the home of his latest matchup? Or will the sinister plague be leveled and the people of the city defended by the Sword of the Angel?
And now, exclusively on the ZBFBooks.com blog, here's an excerpt of the opening pages of 'Sword of the Angel' 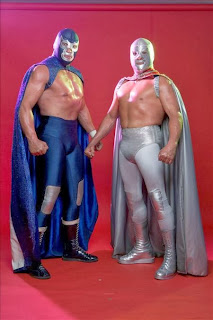 SWORD OF THE ANGEL
BY
BOWIE V. IBARRA
COPYRIGHT 2013 BOWIE V. IBARRA, ZOMBIEBLOODFIGHTS.COM
Published by arrangement with the author
This book is a work of fiction.  People, places, events, and situations are the product of the author’s imagination.  Any resemblance to actual persons, living or dead, or historical events, is purely coincidental.
Copyright 2013 Bowie V. Ibarra and ZombieBloodFights.com.  All Rights Reserved.
No part of this book may be reproduced, stored in a retrieval system, or transmitted by any means without the written permission of the author and publisher.