NEW JAPAN STOMPS INTO TEXAS TO TAKE ON SOME OF THE NWA'S BIG NAMES
By
Bowie V. Ibarra 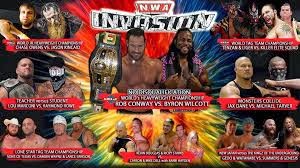 It's over a year in and the National Wrestling Alliance keeps chugging along in spite of all the folks and many of my fellow 'marks' who thought the NWA couldn't keep it together long enough.  It's clear Tony Brooklyn and Bruce Tharpe are doing what it takes to keep the tradition of not only the NWA alive, but of straight pro-wrestling.  The matches are very 'entertaining', but continue to emphasize the wrestling aspect of its sacred grappling tradition.

Recently, NWA - Houston promoted an event featuring the stars of New Japan Pro-Wrestling taking on some of the best on the US NWA scene.  'NWA Invasion 2013' was an outstanding event, and yet another example of how not only the NWA is providing amazing quality pro-wrestling, but yet another sterling example of how pro-wrestling in Texas is alive and well.

Here are some notes on the DVD:

The DVD is skillfully put together with amazing graphics from Diet Productions.  The video quality exceeds the normal standard for independent pro-wrestling DVD quality.  In fact, the production values eclipse ROH DVDs that I've seen.

WEIRD TO SAY, BUT ADVERTISEMENTS

Between each match is a professional advertisement for sponsors for NWA Houston.  I don't know about you, but I'm very happy to see that.  It shows that NWA Houston has a pretty nice budget and are taking care of the wrestlers, in my opinion.  It's very smart, and shows the NWA knows how good businesses are run.

OUTSTANDING CARD OF THE BEST FROM JAPAN, TEXAS, AND ACROSS THE US

Look at this card:

'The Sons of Texas' Cowboy Claxton/Alex Reigns
vs.
'The Lords of Chaos' Damien Wayne/Lance Erikson

One of the best parts of this DVD is listening to the fans and hearing how much they are into the matches.  As a Texas fan, I know how much we let ourselves get into the matches and how much fun can be had at these events.  I've seen some other DVD's where it seems like the fans are sitting on their hands.  But this is a lively crowd, including a hilarious group 'Thank You' every time the ringside timekeeper gives the current minutes of the match.  The 'over here' chant during the Jr. Heavyweight Belt retirement ceremony was pretty funny as well.

From the first match to the end, the wrestlers competing on the card deliver when it comes to great wrestling.

In short, the NWA Invasion DVD is a great souvenir of this historic event that emphasizes outstanding wrestling in the tradition of the National Wrestling Alliance.  It is completely ZombieBloodFights.com approved.  If you're a fan

Get your copy of this outstanding DVD today here.

BOWIE V. IBARRA is the author of the 'Down the Road' zombie horror series from Permuted Press and Simon and Schuster.  His latest story, 'Tejano Star and the Vengeance of Chaplain Skull' is a Tex-Mexploitation superhero story in the tradition of 'Machete' and 'Black Dynamite'.  Get it in paperback or Kindle today.
Posted by Bowie Ibarra at 2:59 PM