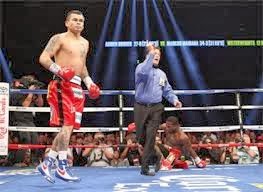 Earlier this year, I recapped a fight between Adrian Broner vs. Gavin Rees.  In it, I describe Broner's victory as pretty good, but nowhere near the Mayweather status folks claim he's the heir to.  He was good, but not that good as a boxer.  Now as a trash talker, yes, he's a total douchebag.  But as a boxer?  He's just okay.

Well, that assumption was finally put to the test in his title fight against the scrappy Marcos 'El Chino' Maidana at the Alamodome in San Antonio, Texas.  It was a unique chance for Maidana to grab the gold, put in yet a very familiar position of being lined up as a tomato can for a star that promoters were grooming for brighter days.  We know how that played out the first time (don't we, Victor Ortiz).  So, you should have known how this night was probably going to play out.


This was an amazing fight filled with great emotion.  Here's some notes from the fight:
-- BRONER DRY HUMPS MAIDANA
Adrian 'Boner'?
Cocky and brash, Broner plays too much.  Near the end of the 1st round, Broner tried to get into Maidana's head by maneuvering away from a Maidana flurry and dry-humping Maidana from behind.  Funny and rude?  Yes.  It solidified Broner as one of the biggest dumb asses in the sport of boxing today.
But did Madiana serve him a receipt later?  Yes, he did.  Near the end of the fight, with Maidana up on points, he got behind Broner and humped him as well.
-- MAIDANA MAKES BRONER LOOK STUPID FOR 12 ROUNDS
Heir to the throne of Mayweather?  After tonight, he'd be lucky to mop the floors of The Money Team gym.  Mayweather might be the king of trash-talking assholes, but at least the guy has the skill to back it up.
Broner comes across as a dude who is impersonating a superstar. The dude's good and has some talent.  You can't get to this level and not have talent and skill.  But he's got to pull his head out of his own ass and put his skill over his trash talk and disgusting antics in the gym.
-- BRONER KNOCKED DOWN TWICE
LOL!
-- BRONER LEAVES THE RING IN A HUFF AT THE END OF THE NIGHT
Bye!
There's an old saying I hear a lot, especially in Texas, when someone you don't like is leaving the room:  Don't let the door hit your ass on the way out.
In the end, I'm glad Broner looking like a jackass before, during, and after the fight will forever be preserved online, the modern day stocks, where we can point and laugh at how a dude from Argentina put him on his ass twice and stuffed humble pie down his throat.
-- REMATCH?
Why not?  I'd love to see Maidana hand Broner his ass again.  Who wouldn't?

And if you like boxing, you've got to read the ZBFbooks.com series, 'Pit Fighters'.  The book features a Scottish Boxer who makes his way to America for a big boxing payday, while making some bones in the MMA cages as well.

'Pit Fighters: Baptism by Fire' and 'Pit Fighters: Double Cross' are combat sports-themed book that features fights from the early days of MMA, and plenty of underground money fights.  You've got to check them out, and they're available on Kindle or paperback today.

BOWIE V. IBARRA is the author of the 'Down the Road' zombie horror series from Permuted Press and Simon and Schuster.  His latest story, 'Tejano Star and the Vengeance of Chaplain Skull' is a Tex-Mexploitation superhero story in the tradition of 'Machete' and 'Black Dynamite'.  Get it in paperback or Kindle today.
Posted by Bowie Ibarra at 7:18 PM