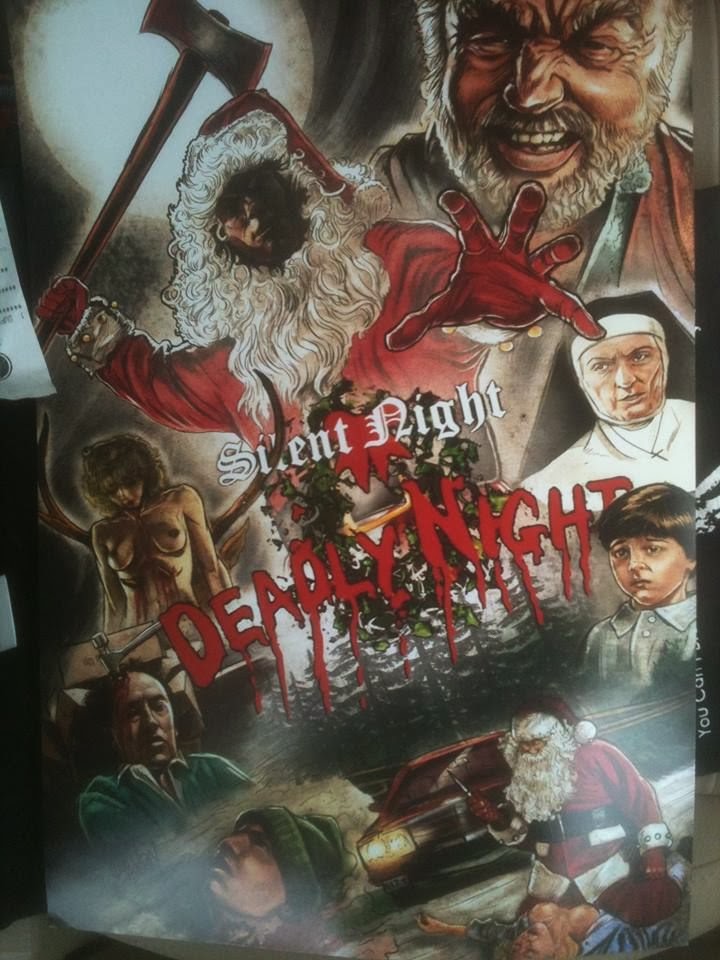 Kelly Warren Hammond, mastermind of the Bloodthirsty Thursday events in San Antonio, Texas, did it again with another outstanding night in the monthly film series.  This month, the put together a solid 'Ax-Mas' double feature, hearkening back to the good old days of cinema with a headliner and a b-movie afterwards.  The films were the controversial (and uncut) 'Silent Night, Deadly Night' and 'Black Christmas'.

'Silent Night, Deadly Night' tells the story of a young orphan who watched his family murdered by a thief dressed as Santa Claus.  Naturally, the kid grows up a big mess that is not remedied in the least through a parochial school for orphans.  Every year, the kid has a hard time with Christmas, until he grows up and gets a job at a toy store that makes a terrible decision to save a buck just in time for Christmas.  Christmas cruelty ensues.

'Black Christmas' plays out like a crime thriller.  It's about a sorority house that is claiming the lives of its members.  A local cop is sought out to help find the killer.  It featured John Saxon, Olivia Hussey of 'Romeo and Juliet' fame, and Andrea Martin from SCTV.

Along with the show was Fast Custom Shirts, a screen-printing team out of Corpus Christi.  It was great to have another chance to get some sweet shirts.  Below were two of my picks. And as per the event, there was a tribute commemorative poster of the featured movie made.  You saw it above at the top of the blog.  It's a nice and sleazy tribute to the bloody and controversial movie.

In the end, it was yet another outstanding Bloodthirsty Thursday event.  The double feature was a nice touch.  It would be cool if they did that again every so often.

So apart from a few folks who didn't know what 'NO TALKING' meant when Kelly brought it up formally and it played across the Alamo Drafthouse movie screen twice, it was still an outstanding event that I highly recommend to all the horror hounds of SATX!  This event and showing continues to be ZombieBloodFights.com approved!

Thanks for all the time and effort put into each event, Bloodthirsty Thursdays!

And if you need more south Texas horror, consider a title from the leader in Tex-Mexploitation stories, ZBFbooks.com!  You'll find stories of zombies, supernatural action/adventure, superheroes, and more!  Check it out today!
Posted by Bowie Ibarra at 6:26 PM