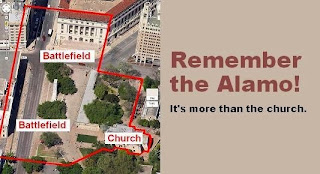 Well, I guess I'm not the only one.
So, I have to admit, when I saw on the news the other day that there were plans to reorganize downtown Alamo Plaza to lend it the reverence it once had and rightfully deserves, I was a little freaked out.
See, I wrote this supernatural horror book called 'Alamo Rising' (available in paperback and kindle) about a downtown businessman who has his land taken away from him by the city council.  The businessman happens to be a part of a secret society.  And even though he had 'brothers' on the city council, it wasn't enough to have the land taken away from him by another businessman.
So this guy goes about unleashing a curse placed on the Alamo during the actual battle that will bring death and devastation to downtown.
And now a similar story is actually playing out.
City council is planning what, to me, is a land grab for letting things get out of hand.  Check out this story.  And this one.  And even this.
Truth is, it sounds just like when Austin said, 'Oh, we want to take this land because its a great natural environment we don't want to squander and rare creatures' and they ended up selling off that land to the highest bidder and building apartments on it.  But I'm getting ahead of myself.
So, as I mentioned before, I'm clearly not the only one that has seen downtown San Antonio become a tourist trap rife with overpriced drinks, rude t-shirt souvenir stands, and out-of-place 3-D virtual rides and dumb carnival style amusements.
Seriously?  This is what SATX has let downtown become?  The site of one of the worlds most legendary battles, where hundreds of Mexicans and Texans alike were killed in a battle that would give birth to this great state is now home for a John Cena wax statue and a 3-D Jungle Ride?  Their blood spilled on this sacred land where I can now buy a shirt that says, '1 Tequila, 2 Tequila, 3 Tequila, Floor', or 'F**k ya'll, I'm from Texas'?  This is how this city honors that battle?
So, I don't really have anything to compare this to.  I've never been to Gettysburg, or Pearl Harbor.  Does New Orleans have a place to honor the big battle that happened there?
I've got a fiver, though, that says there's not a 3-D House of Scares at Pearl Harbor, or a midway to sink baskets and win a confederate or union clad teddy bear at Gettysburg.
Anyway, just like in 'Alamo Rising', folks in the city are wanting to redo Alamo Plaza.  For me, anytime city council wants something changed, someone is in their ear stuffing money in their pockets to get it done.  Look at the US congress, pushing the healthcare agenda by insurance companies, and eternal wars by the defense industry.  What always looks like doing 'good for the community' will always have an ulterior motive.
Now, I get the motive.  Those 3-D fun houses and place where I can make a wax cast of my hand have no place on such hallowed ground as Alamo Plaza.  But those folks that run those places need to make the changes themselves before the city takes their stuff and makes the changes themselves.
To be honest, I haven't seen the SATX city council like I did the ATX city council, who were a bunch of greedy, snide bastards.  And I sincerely believe this whole Alamo plaza thing is going to play out well.  I just sincerely hope when and if this land grab takes place, the city doesn't just build apartments in its place like Austin did.  There has been moves to bring apartments to downtown, and with a new HEB being built there, this wild speculation might not be such a stretch.
I just hope it doesn't play out like at the end of my book.  Ghosts haunting downtown and then at the end when...
Well, you're going to have to get the book here to find out what happens to the Alamo, downtown, and city council when everything falls apart.
BOWIE V. IBARRA is the author of the acclaimed 'Down the Road' zombie horror series from Permuted Press.  Born and raised in south Texas, Bowie calls his books 'Tex-Mexploitation' literature, as they reflect strong south Texas themes and settings, including 'Codename: La Lechusa' and 'Tejano Star and the Vengeance of Chaplain Skull'.  'Alamo Rising' is supernatural horror story in which a curse is unleashed on downtown San Antonio, and the unsuspecting ghost hunters who have to stop it.  It is available at Amazon.com in paperback and kindle.
Network with Bowie at his official website, ZBFbooks.com. 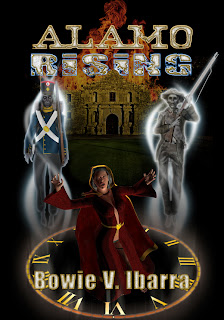