FIGHTS: George St. Pierre cashes out of MMA ... for now

(Photo ripped off from MMAJunkie.com) 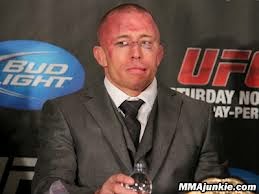 You've probably already heard that George St. Pierre, the most dominant welterweight champ in UFC history, dropped his title.  Before the fight, St. Pierre had suggested he was having personal health problems.  He had claimed he was losing sleep at night, having problems with his vision, and was experiencing memory loss.  And now Joe Rogan has pitched some wild speculation that George has suffered brain damage.

Let's face it, the symptoms he claims to be experiencing could be associated with brain damage due to concussions.  One of the goals of combat sports is to provide a concussion to your opponent, typically referred to as a 'knockout'.  The problem with knockouts and having your head struck a lot is that, indeed, the brain does experience damage when it smacks against the interior of the skull.

Yes, the skull is designed to protect the brain.  But the brain is not an organ that is meant to be rattled around in the skull on a daily basis.  The problem with that is that the damage done over time, from tiny concussions to the big ones, is that its cumulative.  The brain does not repair itself.  When you jack it up, its jacked up.  I'm no doctor, but I've read enough about concussions and seen the results from fighting legends to see that there's a high price to pay for combat sports glory.

Now, I can understand the perspective of some thinking George is ducking a rematch with Hendrickson, that he's a pussy, and that he 'owes it to the fans' to rematch Hendrickson.  I get it.  The thing is St. Pierre has been complaining about the problems for a while.  I know a friend of mine was cracking up at St. Pierre during one fight in which he returned to his corner complaining he couldn't see out of one of his eyes.

For me, George St. Pierre walking away from the sport for as long as he needs is the right thing to do.  The guy's one of the greatest champs of all time.  He's got nothing left to prove.  St. Pierre does not 'owe' us another fight so he can destroy himself and we have to watch him become the shell of the man he is mentally and physically in the future.  The last thing UFC needs is St Pierre being the Ali of the sport.  And the last thing MMA needs, the sport that claims to be so 'safe' and 'safer than boxing', is to have one of their all time great champs destroyed mentally forever, being the greeter at the MGM Grand for the rest of his life like Joe Lewis was at Caesars.

St. Pierre's a warrior.  If he chose to walk back into the ring of his own free will and not because douchebag Dana forced him to, then that's cool.  I'd watch him fight.  I'm going to cringe watching the fight, but I'd watch it.  Fighting is what warriors do.  It's their life.

But if he knows how bad he's doing, then who are we to throw shade at him for walking away from a sport he's dominated for years now.  He's given us all he's got, and now he's paying for it.  We need to let him do what's right for him.

If you enjoy MMA fights, consider the 'Pit Fighter' combat sports book series from ZBFbooks.com.   'Pit Fighters: Baptism by Fire' and 'Pit Fighters: Double Cross' are combat sports-themed books that features fights from the early days of MMA, and plenty of underground money fights.  You've got to check them out, and they're available on Kindle or paperback today.

BOWIE V. IBARRA is the author of the 'Down the Road' zombie horror series from Permuted Press and Simon and Schuster.  His latest story, 'Tejano Star and the Vengeance of Chaplain Skull' is a Tex-Mexploitation superhero story in the tradition of 'Machete' and 'Black Dynamite'.  Get it in paperback or Kindle today.
Posted by Bowie Ibarra at 6:37 PM