COMEDY CHARACTER DUSTED OFF, POINTS OUT HOW STUPID MODERN 'NEWS' IS
by
Bowie V. Ibarra 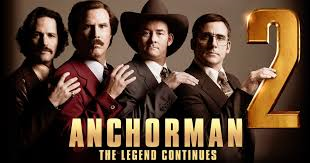 After the success of the original 'Anchorman' movie with Will Ferrell, Paul Rudd, David Koechner, and Steve Carrell, it was surprising the comedy writers couldn't put together another film until almost a decade later.  For those like ZBFbooks.com, the wait was well worth it for 'Anchorman 2: The Legend Continues'.  If you were a fan of the stupid comedy stylings of the first one, you're going to love the second one.  If you weren't a fan, then do not go see this movie.  It's got the same ridiculous comedy elements as the first one, but moves from straight parody to straight satire.

In brief, in the early 80s, Ronald Joseph Aaron Burgandy loses his anchorman job to his wife and is immediately fired, causing a rift in his family that finds him leaving his wife and young boy to work at a Sea World in San Diego.  He then gets a job to be one of the anchors of a radical new news concept:  24 Hour News at GNN (Global News Network).  The movie takes a cue from 'The Blues Brothers' as Ron puts the newsteam back together.

But they are not the only news team at the new facility.  A competitor named Lime challenges Ron to a wager:  News Team with the highest ratings for their time wins.  The problem is Lime has prime time, and Burgandy has the graveyard hours.

And the silliness builds.

The movie will keep fans of the first one happy, with characters returning and even a surprise near the end of the movie that harkens back to a moment from the first movie.

The comedy tone of the movie changed from parody to satire.  Like all good satirical comedies, the movie's plot hides behind humor to expose the problem with modern news:  It's not news, but a crappy form of entertainment and distraction from ACTUAL news.  Not only that, it also takes a jab at news agencies hiding bad stuff that investors into the company might be involved in, revealing the truth about modern news that they're only going to report what they are, literally, being paid to report.  It's not about actual news content, but content that will get people to tune in to placate their sponsors.  I could go on a rant about this, but you get the picture.

It's also a commentary on the clutches of corporate culture and its effect on the family.  Fortunately, from what I understand, many progressive companies are seeing the value of honoring their employees with time for family.

In the end, the satirical spin on the 'Anchorman' sequel is great and not too heavy-handed to take away from the enjoyment of the movie.  It is good for some laughs and is ZBFbooks approved!

BOWIE V. IBARRA is the author of the acclaimed 'Down the Road' zombie horror series from Permuted Press.  His latest title, 'Codename: La Lechusa' is a supernatural action/adventure story about a single mother by day and assassin by night who is granted magical powers by a curandera.  Coupled with her elevated strength, she takes on bad guys in the south Texas town of San Uvalde.  It is available today in paperback and Kindle from Amazon.com here. . 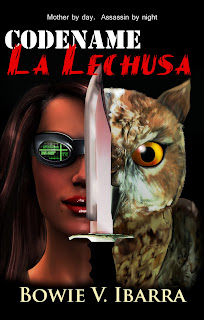 Network with Bowie at his official website, ZBFbooks.com today!