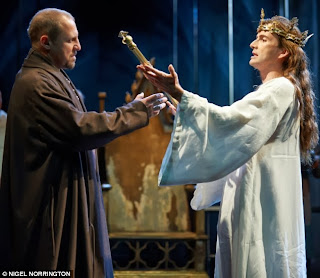 The Royal Shakespeare Company put together an outstanding production of one of Shakespeare's history plays, 'Richard II'.  Starring the world-renowned UK actor, David Tennant of Doctor Who fame, the play is a captivating story of the double-crossed king.

RSC director Gregory Doran makes some fine choices in directing, costumes, and music, bringing an energy to the stage in his use of blocking, levels, and lighting in the thrust stage design.  And his choice of cast is outstanding, especially in the casting of Nigel Lindsay as Bolingbrook, Richard's cousin who returns from exile to reclaim what Richard's regime took from his family and rightful heir.

Word on the street is the RSC plans on doing a series of history plays in the coming seasons.  If they're anything like this one, they're going to be great.

In short, if you get a chance to check out this production, do it.  And don't sweat thinking you can't understand it.  When Shakespeare is done right, you will understand everything that's going on.  And that is definitely the case with this production.

'Richard II' by the RSC is ZBFbooks approved.

BOWIE V. IBARRA is the Texas author of the 'Down the Road' zombie horror series from Permuted Press.  He earned a BFA in Acting and MA in Theatre History from Texas State University.  His books revolve around zombie horror, supernatural horror, general horror, action/adventure, and combat sports.  Network with Bowie at his official website, ZBFbooks.com.
Posted by Bowie Ibarra at 8:59 AM