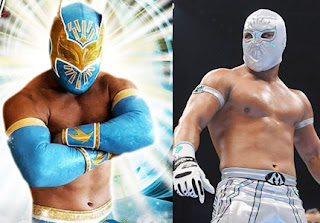 I was one of many pro-wrestling fans who were excited about the arrival of one of Mexico's biggest lucha libre superstars journey to the WWE.  People said this guy was as big as El Santo in his heyday.  Mistico was a true phenomena in Mexico, thrilling fans with amazing athleticism and a dazzling lucha-style attack.

WWE teased fans for weeks as the newly-christened 'Sin Cara' was going to take the world by storm with those same amazing moves that made him famous in Mexico.  I could not wait to see the amazing flying head scissors that sent a foe to the mat while he landed on his feet.  Or the whirling submission hold, La Mistica!

Then in his debut, he almost botched his first ever leap into the ring, but his athleticism pulled him through.  I didn't get to see the huracanrana to the feet, but I did see an amazing high 'plancha' from the star on Seamus.  Things looked exciting.

But Sin Cara couldn't get any momentum, as his matches would start great, but epic moves that failed left a bad taste in fans mouths.  In spite of all the moves he failed to execute, the announcers could not stop telling us how great he was.

His music was also weird, as if Enya and the dudes at Rivercenter Mall in San Antonio recorded a song in an aviary.  Listening to the song with the birds in the background randomly with the ghostly choir of monks kind of makes me feel I'm at a Rainforest Cafe during Halloween.  They also gave him some divine lighting, giving his matches a kind of 'mystic' feeling.

I knew it would not be long before people would turn on him, and it made me sad.  And I thought him not being able to speak English was going to be his greatest liability.

Sin Cara then got suspended under the WWE wellness policy, and he was out for 30 days.
But he had gained such momentum, and it seemed like he was making the WWE a lot of money.

So the buzz was another wrestler had taken his place while he was suspended, taking on his masked persona.  His name was Hunico, who was wrestling in FCW. 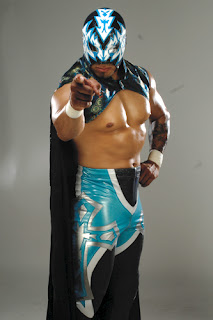 Appropriately enough, with a little research, I found out Hunico also fought not only as Incognito, but as Mystico de Juarez.  It seems he started around the same time as Mistico, and has some great athletcism and skill as a lucha libre artist.

In fact, when he appeared as Sin Cara, he actually did an even better job that the original Mistico.  His move set was completely different and lucha based, and he was very impressive.  Even more obvious was something that was absent from the suspended Sin Cara:  Confidence. 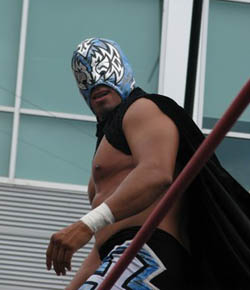 This Sin Cara had an edge, even going so far as to kick Bryan Danielson at the end of a match.

Even better, this Sin Cara can speak English!  He's showing yet another strength over Sin Cara I.

Now, the buzz is that there might be a fight between the two Sin Cara's.  But with Sin Cara I's exile yet again, who knows if this fantasy matchup will go down now.

However, as a fan of lucha libre and supporter of truly talented lucha stars like Alberto Del Rio and Mistico making it to the big time, I would absolutely positiviely love to see that match.  At this point, it's only a fantasy match up.  But it would be great to see it happen.

And if that were to happen, then its time for classic lucha family tag teams:  Sin Cara I and II.

And while I'm at it, let's see Sin Cara I or II vs. Rey Mysterio in a mask v. mask match at 'mania!

You can also network with Bowie at his website, ZombieBloodFights.com.

This blog has been brought to you by ZombieBloodFights.com
Posted by Bowie Ibarra at 8:15 PM