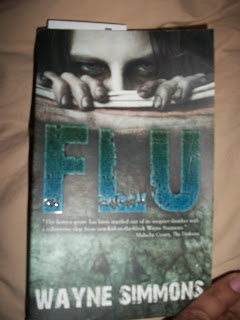 Wayne Simmons made a splash with his first outstanding "Drop Dead Gorgeous" about a mysterious apocalypse that eventually became an attack of the living dead women.  It was an outstanding bizzare story that you should look for right now.
Simmons follows up "DDG" with his next outing, "Flu".  Flu once again brings the zombie apocalypse with a Euro vibe to the world.  And it is yet another well written piece of zombie fiction.
The story follows a group of people trying to work their way through the growing zombie apocalypse brought on by a strange flu virus that is killing people and bringing back zombies with severe runny noses.  A woman ends up with a group of rogues and all try to survive from day to day in Belfast, Ireland, dealing with each other and the growing booger-filled flesh eating hordes.
Just like his first work, Simmons has put together a great, well paced story with great peaks and valleys moving to the finish.  There are some great chapters that end with tremendously power.  Thirteen and fifteen come to mind.  The scene builds to a great emotional climax that matches the cruelty of the apocalypse outside.
Simmons also provided a great balance of character development without leaving out the threat of the zombies.  They are always there, and there is always danger.  And you expecially don't want to be the one that sneezes when you're with your buddies.
Simmons brings yet another aspect of the z-poc to his story that adds an extra element of sympathy, sadness, and awkwardness.  Like in "Drop Dead Gorgeous", a small female child takes the role of key plot point.  I felt so bad for the child to be a part of the apocalypse.  But the reality of it is that children will be a part of the end as well, and having the child there brings some true humanity and concern to the story and the group trying to survive.
Chris "Fucking" Jones of Physical Graffiti calls Simmons writing, "...like the grotesque lovechild of George A. Romero and Charles Dickens.  And I think that's an apt description, because Simmons writes in a clear, concise, and deliberate fashion.  Like some of his Euro zombie lit contemporaries Iain McKinnon and Remy Porter, Simmons uses great word choices to describe the events, emotional experiences, and dangerous circumstances the characters find themselves in.  Simmons doesn't just pound out a gory living dead story, he carves it with the care of a master sculptor using language, truth, and zombie horror to elevate his zombie apoc work into true zombie literature.
In short, its a great story that you need to check out today.  A great story with a deliberate pace, meaningful characters, and a great finish.
==================
Bowie Ibarra is the author of the "Down the Road" zombie horror series from Simon and Schuester and Permuted Press.  His most recent work, "Codename: La Lechusa" is a superhero story about a single mom who doubles as an assassin at night.
You can network with Bowie at http://www.zombiebloodfights.com/
This has been a ZombieBloodFights.com production
Posted by Bowie Ibarra at 3:16 PM