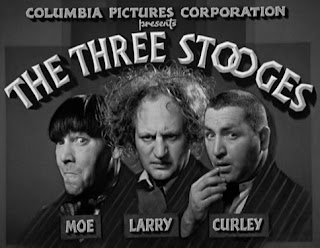 What was a great night of boxing turned into one of the most outrageous moments in boxing since Mike Tyson bit Evander Holyfields ear.  Three Stooges took to the ring in the main event.  Was it wild and entertaining?  Yes.  Was it cool?  No.  But we'll get to that in a second. 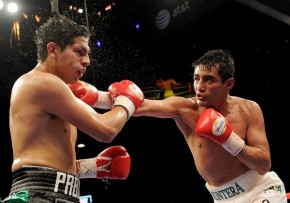 MORALES/CANO
Erik Morales is on his way out of boxing, but his signature grit and toughness, coupled with some great science, put away the game Cano.  Cano was taking it to the experienced Morales throughout the fight.  But he could not put the old man away.  Morales stayed in the fight and punished Cano for it, swelling his eyes so bad the ref had to stop the fight.  It was a great fight. 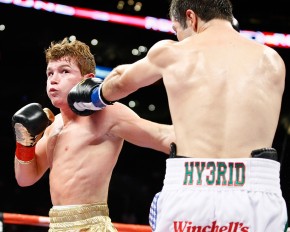 "Canelo"/Gomez
Gomez took it to the young Mexican boxing sensation, bringing a good set of science and skill to the ring.  But either Canelo was not threatened by Gomez, or he wanted Gomez to get tired.  The 1st-3rd round found Canelo letting Gomez just hit him with no answers.  It was a dangerous gambit, as Gomez was getting in some good punches with science.
But in the 4th, Canelo turned it up and lit up Gomez with his signature power.  Gomez was out on his feet after a series of serious hits, and though I would have gave him a standing eight count, the ref was wise enough to stop the fight.  It was a good call. 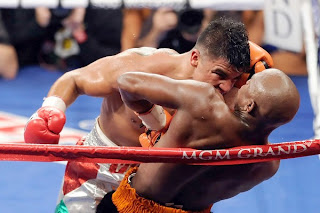 MAYWEATHER/ORTIZ
The main event matchup started great, but then turned bizarre.  Here's what went down.
Ortiz pushed Mayweather with some good attacks, but could not beat Mayweather's speed.  But nobody can do that, apart from Pacquiao.
At any rate, Mayweather won round 1 and 3 on my card, with Ortiz taking the 3rd.  In fact, he was on his way to winning round 4, backing Mayweather up and punishing him with punches when out of nowhere he decided to headbutt him.
After reviewing footage, here's what happened.
Cortez seperated the two as Ortiz apologized.  Cortez deducted points holding Ortiz by the wrist after scolding him.  While Cortez is deducting points, Ortiz is still trying to apologize to Mayweather.
As Cortez informally sends them to their corners, the says, "Let's go", but then doesn't pay attention to what's going on in the ring.  He's still communicating to someone on the outside.
Ortiz, still penitent, gets Mayweather again who takes the hug.  Ortiz, with his hands down and still trying to apologize, then gets clocked once by Mayweather.  Ortiz turns to Cortez, who missed the cheap shot but is stunned back to the action moments before Mayweather cold-cocks Ortiz with a straight right sent right down the middle, hitting Ortiz on the button.  He's KO'd.
It took me a while to figure out what I just say, as the titty bar I was watching it at was quite loud.  But here's the ZombieBloodFights.com take on the events.
It all starts with Ortiz, who, like a 'pendejo' did that headbutt.  Everything started there.  The fact was, with that flurry, he was really taking it to Mayweather, riding a wave of momentum before he pissed it all away with the headbutt.
Cortez does his job, but then starts the fight informally with a 'let's go'.  Then, he supposedly gives this command to start the fight again and is not paying attention to the fighters.
Ortiz was a douche for the cheapshot, but Mayweather becomes the biggest dick in the world as he cold cocks Ortiz, who is clearly not ready to fight and is still trying to get over his stupidity.  He payed for it in the end.
Then, not only does Mayweather accept winning with the cheapshot, he then yells at the stupid old man Larry Merchant for asking the hard questions he always asks.  I hate Larry Merchant, because he can also be a total douche to the fighters.  But for him to stand up to Mayweather after Mayweather told an old man he should be fired because he "doesn't know shit" about boxing was epic.  I'm not much for Merchant, but I can respect that.
I understand retribution in sports.  It's similar to life.  You screw somebody over (Ortiz), you can expect retribution (Mayweather).  I get it.
But when you call yourself the best in the world, control every aspect of contract negotiations to protect your record (see Pacquiao), insist to come in last instead of the champion (Ortiz), assault and choke a boxing champion (Ortiz) at the press conference, and burn your own money, you are not a king of boxing, you are a tyrant.
Like most tyrants and tyrannical governments with large resources of money and power, there is nothing they won't do to retain their power.  And they will crush anyone who stands in there way by any means necessary.
It was legal, but it felt more like a finish to a match with a pro-wrestling from the Heenan Family.  The late Bobby Hennan distracts the ref while his charge cheats to KO the good guy with dusters or something, then the ref turns around, sees the guy knocked out, and counts the bad guy the 1-2-3. 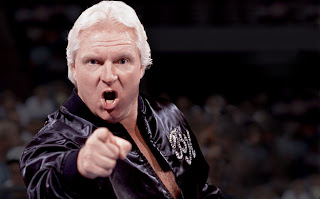 "Win if you can.  Lose if you must.  But always cheat."
On the other hand, there's something to be said about that.  Let's face it, when someone works very hard to get what they've earned, they will do what they need to do to protect it.  They worked hard to get it.  And if they want something bad enough, they need to be ruthless enough to keep it.  Nice people can get far in the world.
But face it, it's the people who are cruel enough, or, perhaps its better to say, know when to be ruthless, who get what they want in life.  People who will show kindness and smarmy sincerity when they need to, or lie, cheat, and back door their way into what they want get places.  I experienced that in my time in flat track derby, but that's another story.
When you add money, power, and talent to that, you get some of the most successful people in the world.  And, right now, Mayweather is one of those, and still undefeated, because he was ruthless enough to crush a guy who was foolish enough to believe he was fighting a guy that wasn't capable of that kind of ruthlessness.
Is Mayweather a douchebag?  Yes.  Is Ortiz stupid for starting the whole mess?  Absolutely.  Could Cortez have been more emphatic about the restart and had them in their corners where they belonged?  Yes.
But some of the most ruthless people in the world are also the smartest.  On Saturday, September 17th, 2011, that was Mayweather:  still undefeated, still making paper, still champ.
====================
Bowie Ibarra is the author of the noted zombie horror series "Down the Road" from Permuted Press and Simon and Schuester.  He is also the author of the combat sports story "Pit Fighters: Baptism by Fire" and the upcoming "Pit Fighters: Double Cross".
You can find out more about his books at:  http://www.zombiebloodfights.com/
This has been a ZombieBloodFights.com production
Posted by Bowie Ibarra at 4:21 PM