ACW turned up the already hot day at Mohawks in the ATX for yet another great show.  Distrust, Dismay, and Antisocial Behavior brought more great pro-wrestling action to central Texas.
I didn't catch every match due to the fact that one of my fellow SuperFans had an episode with heat exhaustion, but I did get some pictures.  Here's some snaps and news from the event.
BARRY BREEZE upped his meanie level by beating up on his old partner, JC BRAVO.
But the big news for Barry was being recruited by homeless former tennis pro from "Royal Tenenbaum", "The Baumer" Chris Trew.biz.  This douchebag made an appearance at prom and came to the ring to take the thrift store boots to Bravo with Barry.  Chris Trew.biz then gave JC an earful. 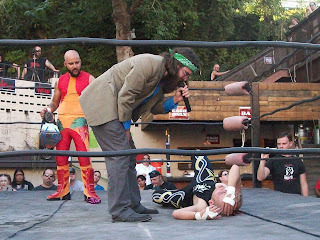 Chris Trew.biz also made a strong statement by showing me a nameplate for a desk he must have had in his former life during the dot.com boom and his current time on skid row.  Though it seemed like he was going for a Tommy Chong pothead look with the green headband, the Goodwill blazer added a hint of professionalism to an already Austin hippie dress sentence. 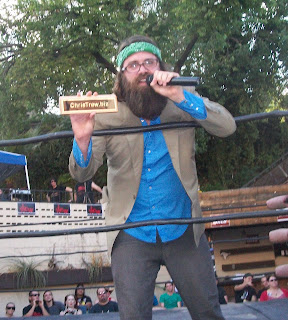 This Austin hippie trashball might be a dick, but he is clearly a game-changer that has the potential to take Barry into the upper echelon of ACW with his quick wit and general mastery of douchebaggery.
I tried to ask David Tennant's brother from another mother what he thought, but he was mesmerized by the cruel manager of the 'Children of Pain' Vanity Valentine. 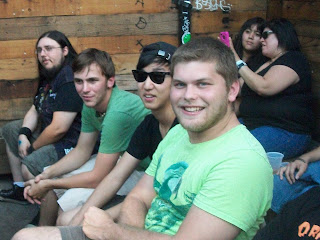 Vanity put together a finely crafted piece of hooker trash couture with this red and black ensemble.  Razor cut top over a zebra-stripped string bikini top and matching bottom worked well for the heat.  There were no leg warmers today as you might imagine.  And her hooker heels with peek-a-boo toe was great, but I expected something different this time around.  Even the 'Sinister Ginger' Miss "Roller Derby Name" Maul-ie mixes up her footwear.
There was also a complaint from the ACW SuperFans around me that she was dripping blood from her head.  Or was it the red hairspray from Sally's.
Though she was working for convenience to go stand on the street corner of Red River and 6th after the show, I have to give her ensemble a 6 out of 10 this time around for the repeat of the shoes.  Let's be a proper tart-manager, Vanity, and up your footwear game. 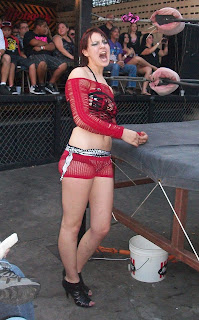 Hooker couture aside, her management skills for the sparkly emo champs, The Children of Pain, was finally scoring dividends for the champs, and Sky and Silver took the win.  Sky was able to utilize his chubby size for the power game, and Silver utilized the science.  Vanity gave the edge in distracting. 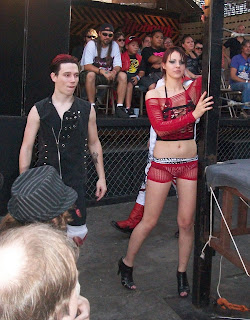 LADY POISON came to the ring to defend her belt against rival ATHENA. 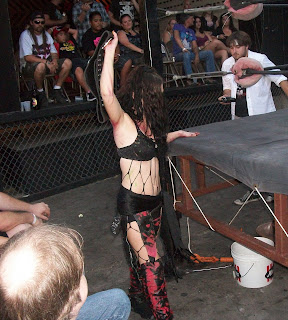 As usual, it was also great fun, with Poison taking the win. 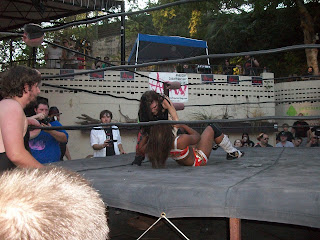 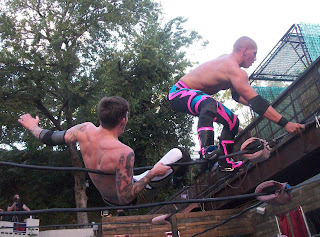 Crisp and Clean.  Seriously, check it out below. 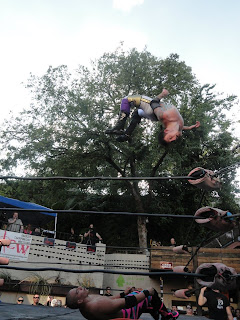 Also, thanks to Mr. Brandon Stroud of With Leather 'Best/Worst of Raw' for letting me borrow the shot.
And if you're not checking out With Leather's 'Best/Worst of Raw', I'll have a link for you at the end so you can go there.  Because, you need to visit the site every Tuesday afternoon.
TEXAS BULLROPE GRUDGE MATCH
PORTIA PEREZ v. LILLIE MAE
The fightin' redneck Lillie Mae had a score to settle with noted Canuk Portia Perez.  Portia had smashed Lillie in the face with a wrench, taking her shot at the Queen of Queens Title away from her.  Tonight, Lillie had a chance at revenge.
Portia taunted the ranch hand and took it to her with Canadian ferocity. 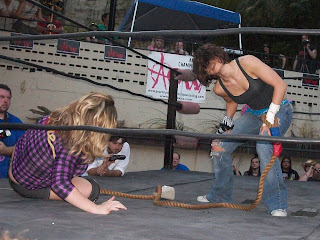 There has been a very noticable shift in the intensity of the Canadian Mexican, and she gouged and tore at Lillie's wounded nose. 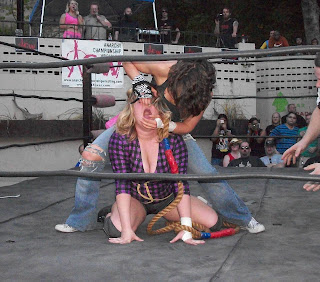 But Lillie got the upper hand and eventually wore Portia down enough to pull out a suprise:  Pig Slop!  And you know what happened next.  Portia got slopped! 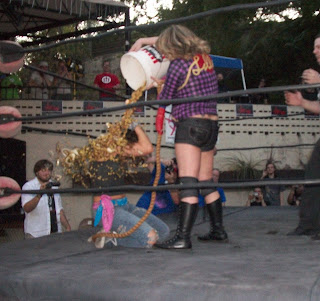 Portia had saved up enough energy for her to use one of her 'SPECIALS' and gave a Chris Adams-style SuperKick to Lillie. 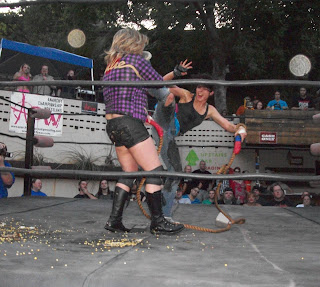 But it was not enough, Lillie walked away with the victory with a little assistance from the ref.  All of the SuperFans on our end saw an early count before Portia's shoulders were even on the mat!  The ref needs to be reported to the Texas Athletic Commission and see if he has performed all of the requirements for certification of his referee license.
I asked Portia Perez MegaFan Brandon Stroud what he thought.  This is how he responded. 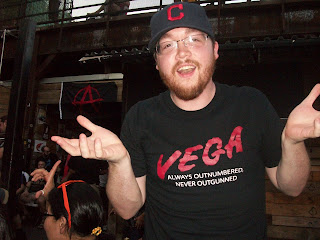 DAVEY VEGA (C) defended his title against monster jerk JAYKUS PLYSKIN and JESSICA JAMES, who won a Battle Royal for the spot early in the night.  It was a see-saw battle that ended with Vega taking the win after Darin Childs cracked Plyskin in the head with the Portia Perez Wrench. 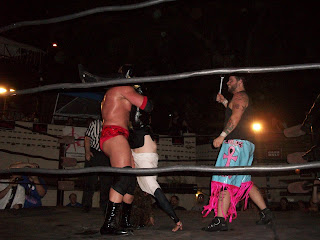 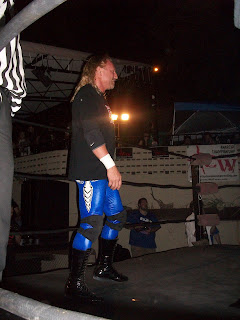 Rachel has been bringing the heat lately, taking on some of the toughest dudes in ACW.  If I've been watching something revolutionary in pro-wrestling in ACW, it's the fact that many of the girls of ACW put it on the line against dudes and actually do an outstanding job against them.  They are certainly breaking down barriers, and Rachel Summerlynn is leading the charge. 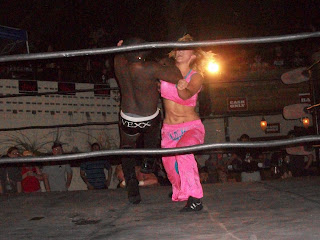 Jerry Lynn, on the other hand, still had some reservations fighting the Joshi Star.  He didn't, however, have any problem protecting ACH from a Barbie Buster from Summerlynn.  In fact, he kind of enjoyed it. 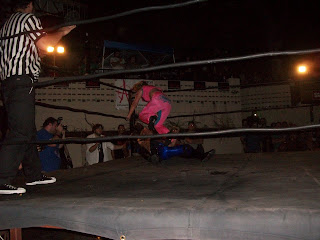 Near the end, Rachel was eliminated.  She seemed a bit suprised. 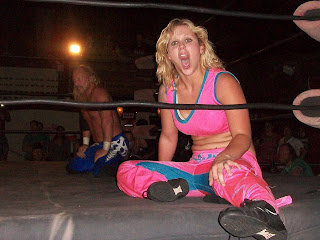 The match was going to be a fight to the finish between ACH and Lynn when Awesome Andy who had no business being at the ring grabbed Lynn's leg while trying to suplex ACH, giving the win to the ACW SuperStar. 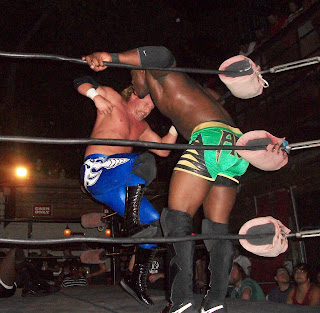 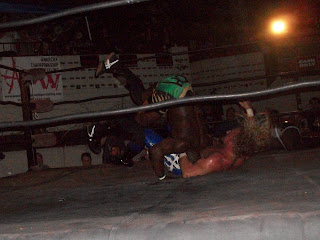 In the end, it was a great night of wrestling under the hot Texas sun.
If you live or know people who live in the Austin area and enjoy pro-wrestling, you have no excuse not to show up to the next ACW event in Austin, Texas.
Even if you don't live in the Austin area, do yourself and pro-wrestling a favor, and seek out good independent pro-wrestling and go cheer and jeer the boys and girls putting it on the line for our enjoyment.
And to all the wrestlers, strippers, and managers.biz I cheer and jeer, thank you.
===================
Bowie Ibarra is the author of the zombie horror series "Down the Road".  You can learn more about Bowie and network with him at ZombieBloodFights.com.  http://www.zombiebloodfights.com/
This has been a ZombieBloodFights.com Production
===============================
For the best WWE Raw commentary, favorite this page:
http://withleather.uproxx.com/2011/08/the-best-and-worst-of-wwe-raw-829
Receive updates on Best and Worst via Twitter @MrBrandonStroud
Upcoming ACW shows, exclusive videos, and other news can be found here:
http://darinchildsfallfromgrace.blogspot.com/
To learn more about some of the Stars of ACW, taking central Texas by storm, go here:
http://anarchyroster.blogspot.com/
For awesome professional pics of the ACW shows, peep this:
http://texasanarchy.com/
Posted by Bowie Ibarra at 8:42 AM