UFC 134 - Brazil was a tribute to the country that brought the vicious bloodsport that is money fighting into our homes for big bucks and a small fee from the proletariat.  It was a very special edition of 'bread and circus', complete with a little history lesson, ala George Orwell, from our MMA overlords, Zuffa! 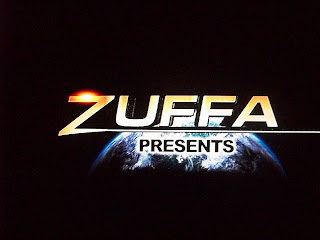 The Zuffa UFC re-education went something along the lines of "Brazil is where NHB was born, and they brought it to America for all of us to enjoy.  We owe it to the Brazillians, who do indeed have a great affinity for smashing people's faces with great Brazillian jiu-jitsu technique.
However, Zuffa and Brazil and all Brazillian fighters, don't take credit for Mixed Martial Arts.  Before it was Mixed Martial Arts or No Holds Barred, it was called Pankration.  The Greeks practiced it first, and it was a mix of boxing and wrestling with absoulutely no rules.  Dudes died for the glory of being the best.  It was even an Olympic sport, but too many people died to give it a long lifespan.
With that said, it is time for a modern Pankration featuring the best MMA fighters in the world.  Make it happen, Olympic committe.  Make it happen!  People might actually watch the summer olympics.
And Bruce Lee went to Han's Island and participated in a tournament of martial arts.  Black Belt Jones and John Saxon were there, too.  So was Bolo Yeung.
And if I'm going to bring up Bolo Yeung, Bloodsport came before UFC, too, Zuffa and Brazil.  Yeah, Helio might have been having 3 hour fights in a dive bar in Sao Paulo, but Paco was schooling kung-fu dudes with this Muay Thai.
And, truth is, UFC I and II were flukes meant to promote Gracie Jiu-Jitsu to bring their martial arts style to the states and make money instead of fighting Vale Tudo dudes and beating up tourists on the beaches of Rio for free.
Rorion Gracie put it together.  And though insiders thought Gracie monster Rickson Gracie was going to come in and school everyone with his jiu-jitsu, Rorion made the great business move to make the runt of the Gracie clan, Royce, the centerpiece of the show.  All Royce ever did was surf and borrow money from his brothers.  Also, he did a lot of Jiu-Jitsu and was very small.
And that wiry little shlub of the Gracie clan changed the martial arts world.
Zuffa ended up buying the franchise when Rorion and Art Davie, the booker, had run it into the ground.  And the rest is billion dollar history. 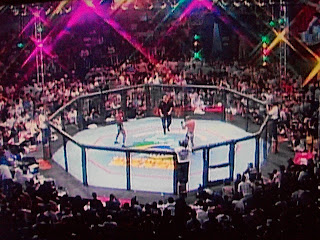 They even played a clip from the last time they were in Brazil, featuring a shot of when future phenom Vitor Belfort schooled a young Wanderlai Silva.  Belfort went on to a hot/cold career.  Wanderlai became big in Japan. 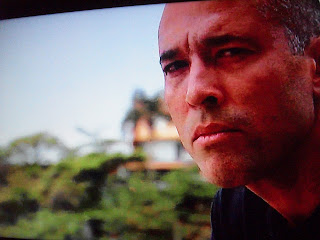 And, of course, good old Royce, who has not seen a UFC match since he was caught for juicing after his noble sacrifice to UFC legend Matt Hughes. 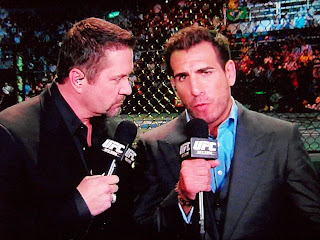 Ben Stiller's stunt double, Ken "K-FLo" Florian took Joe Rogan color duties.  Rogan claimed on his Twitter account he had to stay in LA for 'Fear Factor' taping.  I think he didn't want to get busted at Customs with a buttload of Brazillian Smokey-Smokey.
STANISLAV NEDKOV vs. LUIS CANE
I think it was wise to not make the show a Brazil vs. US show, so they stacked the card with competitors from around the globe.
The best match of the night was the first fight of the PPV.  It featured a Bulgarian named Nedkov taking on the next big thing, Luis Cane from Brazil.  It kind of felt like they were setting Nedkov up as a can for the Brazillian.
But Nedkov flipped the script, clocking Cane and sending him into a fish dance before mauling him against the cage. 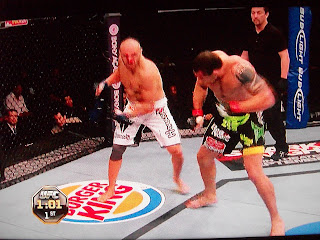 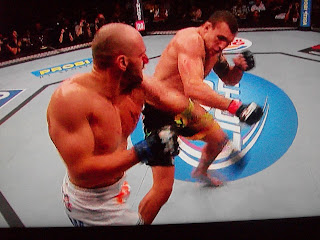 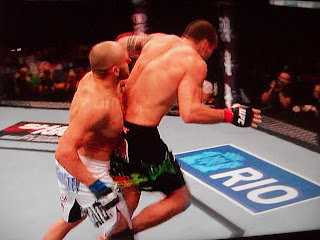 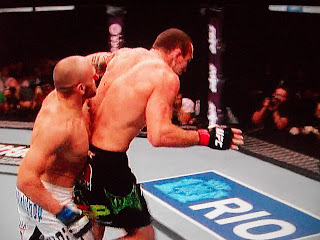 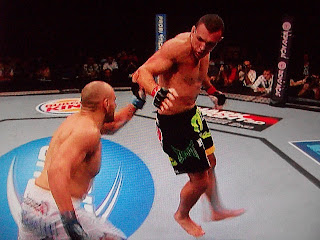 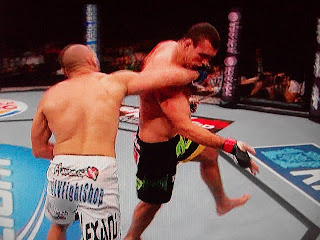 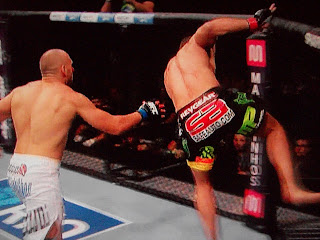 Nedkov/Cane get my Fight of the Night honors, as well as my biggest laugh of the night honors!
And, for your viewing pleasure, the Fedor Fish Dance!
http://www.youtube.com/watch?v=nKBFAwntNMs
Nedkov celebrated by wiping his bloody nose in his nation's flag. 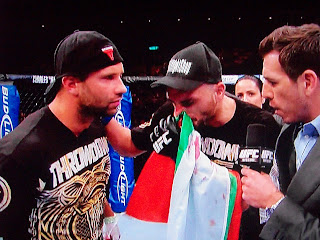 Then there was that awkward moment when the only translator that was hired ony spoke Portuguese, French, and Tongan, but not Bulgarian. 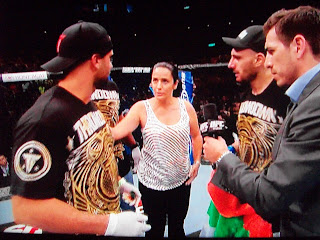 'BIG NOG' vs. BRANDON SCHAUB
Though the Brazillian lovefest started with a bit of a boner-killer, the BonerJam was about to begin.  In what turned out to be a lopsided fight, Nog submitted Schaub with BJJ skill, and the rubbing of a million BJJ LoveShafts began. 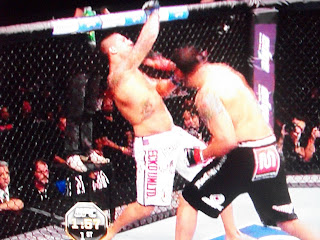 Oh, wait.  It wasn't BJJ skill that won the fight. It was a KO.
No need to stop rubbing, though.
Then, because the fight went so fast, we were treated to a fight from the pre-show, in which a Catholic Brazillian beat up a Protestant Brazillian.  The winner gave all his glory to Jesus, even going so far as to stitch our Lord and Savoiur's name just above his crotch for his scientific BJJ win.
Oh.  Wait.  It was a KO. 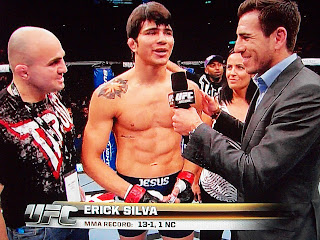 ROSS PEARSON vs. EDSON BARBOZA
The gutsy limey Pearson was more than Barboza expected, and took the energetic Brazillian to the cards.  The great skill of Barboza's BJJ dominated.  Oh, wait.  They punched and kicked the whole fight with great joy and verve.  It was a good match, and could have gone either way.  Brazil over UK. 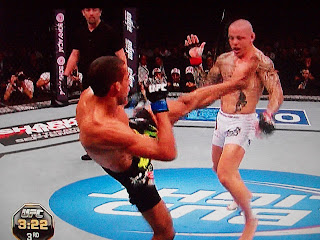 Also, never been much for the 'Bad Boy' brand.  I don't like thinking a dudes ass is looking at me.  Kind of creeps me out. 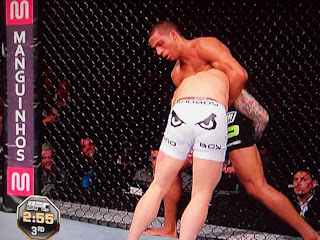 FORREST GRIFFIN vs. MAURICIO 'SHOGUN' RUA
Forrest Griffin brought some Georgia toughness to the fight, but Rua overwhelmed the southern fighter with great scientific Brazillian Jiu-Jitsu.
Oh, wait.  He punched him about the face until the ref stopped him. 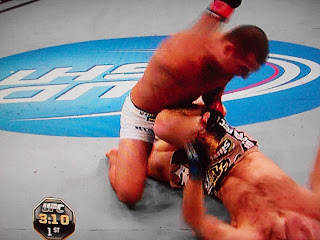 ANDERSON SILVA vs. YUSHIN 'THUNDER' OKAMI
Dana loves Anderson.  Then he hates him.  Then he loves him.  Then he hates him.
Lord Douchebag finally figured out you get the best out of Anderson when you book him against a guy that will mix him up on the feet.  Because, c'mon, folks.  If I knew a dude was good at grappling on the ground, champ or no champ, I'm not going to down into his guard.  I don't blame Anderson for the snoozefest some of his fights have been.  It's been masters of BJJ who couldn't bring him to the ground and then used the Murilo Bustamante method of lying on their back until the time runs out or the ref lets you back up.
Like Kevin Nash at War Games, I haven't forgot how Murilo Bustamante lay on his back for 40 minutes in his fight against 'Big Cat' Tom Erikson.  Look it up.  It happened.
So Anderson activated his spider senses and gave Okami the 'Griffin' treatment by standing with his hands down, dodging a punch, and replying with a KO blow of his own. 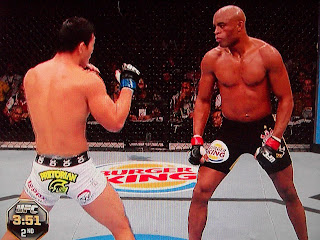 He even took on a classic martial arts movie pose before KO'ing the Japanese star. 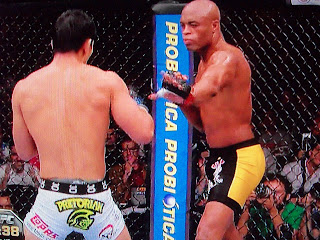 Anderson takes the win, and an entire country goes through a Kleenex shortage.
In the end, it was an alright card.  Watch it online somewhere.  Don't buy it unless you get off watching Brazillian fighters trash people.
========
OTHER BLOGS YOU MIGHT ENJOY:
Nick Diaz's career counselor should be praised
http://zombiebloodfights.blogspot.com/2011/01/fights-nick-diazs-career-councelor.html
+++++
Bowie Ibarra is the author of the zombie horror series, "Down the Road".  You can learn about his books and network with him at ZombieBloodFights.com.  http://www.zombiebloodfights.com/

This has been a ZombieBloodFights.com Production.
Posted by Bowie Ibarra at 9:31 PM