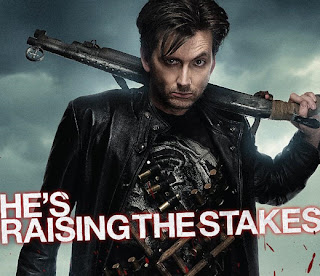 Let me start by saying I wasn't going to see this movie.  Fright Night?  Nope. Not for me.  In fact, I might need to requalify for my 'movie expert' card for not seeing the original.  I was young, and I thought the movie poster was dumb.  Scary clouds above a house didn't tell me anything about the movie.  Was it zombies?  Was it ... what was it.

So that's what I felt when the remake came out.  Because I didn't like the first one, I wasn't going to give this remake a chance.

That is, until a buddy I used to do improv comedy with named Jay Olson (who works in Chicago living the improv dream), posted a Facebook update that talked about the first trailer and how David Tennant was in it. 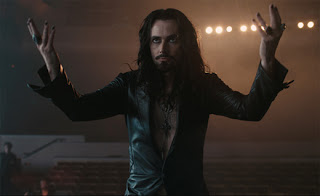 For those not in the know, David Tennant is the stellar actor that completely rocked the Doctor Who world with his portrayal of the legendary UK sci-fi hero.  Not since Tom Baker has there been a Doctor as popular as Tennant.  His work was the most powerful and moving I had ever seen.  His work as a Shakespearan trained actor brought amazing strength and truth to his role as the time traveller.  He upped the ante of Christopher Eccleston before him and Matt Smith after him, who, in my opinion, has not come close to Tennant's work.

Apparently, Tennant was in the first trailer for about one second.  I immediately thought, "Oh, David's got a bit role and is going to do the j-o-b to Colin Farrell.

But it later became apparent that he would be featured in the movie as one of the main characters.  It was then and there that I decided I would buy a ticket.

Here's the synopsis, ripe with spoilers.  You have been warned.

The kid played by Anton Yelchin and his mom played by Toni Collette wonder about this guy who moved in next door played by Colin Farrell.  They live in a subdivision just outside of Las Vegas.

One of the kids buddies played by Chris Mintze-Plasse, "McLovin" from 'SuperBad', tries to tell the kid that his neighbor is a vampire and is killing all their friends.  He doesn't believe it, and McLovin ends up caught by Vampire Farrell.

After a while, the kid figures out Farrell is, indeed, a vampire and tries to enlist the help of Tennant, who plays a bitter illusionist.  His character is kind of like Chris Angel, but with a heavy vampire-killing theme to his shows.  He refuses to help the kid.

But when the Vampires make a move on Tennant's Vegas stronghold laced with antique vampire-fighting weapons, it forces Tennants character to look inside himself.

The kid makes a move on the vampire's lair when his girl, played by the girl from 28 weeks later, is captured by Farrell during the crisis.  Tennant has a change of heart, becoming the unlikely sidekick to the kid, and they enter the lair to take on the ancient beast into the climax.

I have to admit I enjoyed it.  I didn't think I was.  But they stuck to a good story with a simple formula following the dramatic structure.

The trailers have Colin Farrell looking like he mailed in his performance.  But watching his performance in context made what I thought was smarmy mugging during the trailers something different.  It became a patient arrogance of someone with a kind of strong omnipotence.  Colin could smell the characters, know they were near.  He was restricted by traditional vampire lore, but also had their super strength and speed.  I thought his character went beyond just plain creepy to sinister.

I think Farrell upped his performance to make sure to take the scenes with Tennant in the flick.  As his performance in the Doctor Who series, Tennant brought a Shakesperean-trained performance to what was a standard Hollywood action script.  The dialogue was nothing special, but in the hands of a master like Tennant, gained a resonance that the lines would not have had with other actors.  Only Tennant could make the phrase, "Get the fuck out of my house" powerful on a RSC level.

And his dialogue was a strong American departure from his Doctor Who role.  His lines seemed to have been written by Samuel L. Jackson, as he used the 'F' word a lot.  I would have like to have seen more British slang used, like "Fuck all" or "Bollocks".

As the professional Tennant was, with all the potential to steal scenes, he shared them.  People like me that showed up specifically to see him will be happy to see that with his material and with the script, he was able to bring a strong performance for his lovable character.

All the other actors did well.  And in all, it was a great performance.

It wasn't anything groundbreaking.  But it was a good action/vampire horror story worthy of watching on the big screen.  And, to be honest, Tennant's performance is worth the price of admission.  Farrell as a great heel is just icing on the cake.

Bowie Ibarra is the author of the zombie horror series, "Down the Road" from Permuted Press and Simon and Schuester.  His most recent story, "Codename: La Lechusa", is a superhero action story with a paranormal theme.

For more information and networking, go to ZombieBloodFights.com.

This has been a ZombieBloodFights.com production.
Posted by Bowie Ibarra at 11:07 PM