UFC put together another card that looked alright on paper and turned out to be just that.  Alright.

Mike Pyle came to the ring to the "Rocky" theme.  Fighting in Philly, the City of Brotherly Love in Theory, it was now a fight he had to win.

I couldn't tell from Joe Rogan's unbiased commentary which guy he wanted to win.  All I heard was the word "phenom" being thrown around enough to create a Rory McDonald drinking game.  You take a shot every time Rogan describes him as a phenom.  He took on UFC vet Mike Pyle and crushed him pretty quickly, bringing about quick comparisons to George St. Pierre.  Let's let that thought marinate for a while before we start comparing another Canuk to one of the greatest MMA fighters to ever grace the cage with his ferocity. 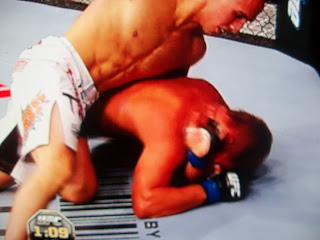 I can tell you one thing.  The poor guy had a phenomenal acne problem.  His face was peppered with them and so was his back.  He looked so young that you think you'd see this guy walking out of the "Magic: The Gathering" club at the Library. 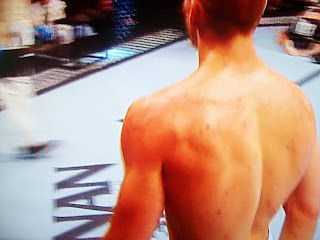 However, the guy is good and has been studying pure MMA since his youth, so it will be cool to watch Rory "Acne" McDonald walk his UFC MMA road.
JORGE RIVERA lost to CONSTANTINE PHILLIPOU in what was a snoozer.
Then, BRIAN EBERSOL took on DENNIS HALLMAN in what was quite a spectacle.
First off, I thought Scott Bacula from "Quantum Leap" was on the way to the ring.  Somehow, I guess there was some metaphysical lesson that needed to be learned. 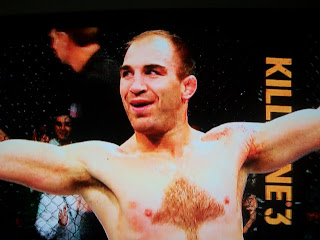 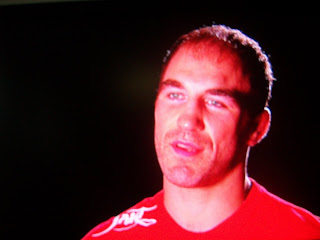 I halfway expected Dean Stockwell playing Al to be his cornerman. 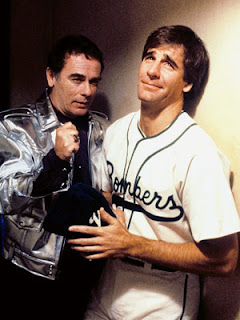 Scott showed up with his gimmick: An arrow made out from his chest hair.  I think it would be funnier if it was pointed another direction. 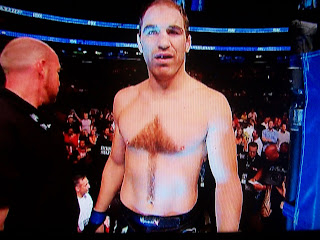 Then his opponent, MMA/NHB veteran Dennis Hallman made his way to the ring.
Dennis is a legend in MMA.  From what I understand about him, he is more than happy to share that fact with you if you didn't know.  He is known for beating UFC legend Matt Hughes TWICE!  Tonight, his legend would change to.... 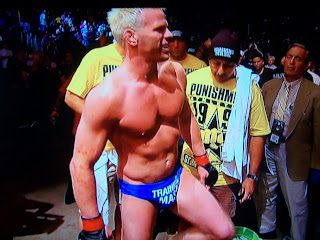 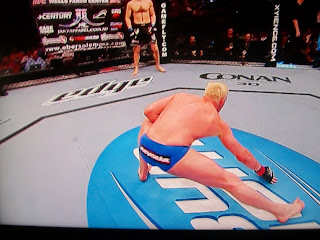 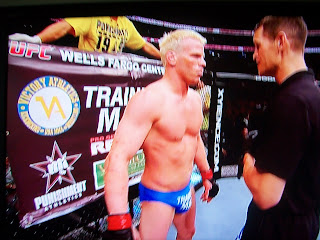 One of my buddies made the great observation that he was wearing trunks like Soda Popinski or Super Macho Man from the Punch-Out series. 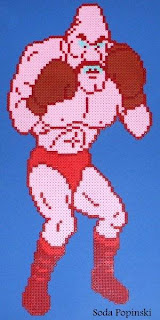 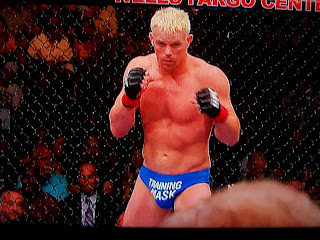 The fight began, and Dana White and America got really, really nervous.  @danawhite actually live tweeted, "WTF!!! Fighting in that will be illegal after tonight!  Anyone want to grapple with hallman?"
So, what does Hallman want to do?  GRAPPLE! 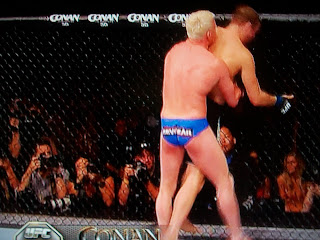 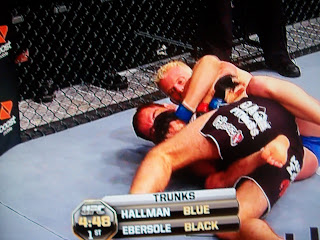 In the end, Bakula took the mount on Hallman and pounded him out.
(Maybe that wasn't the best way to describe that.  Oh, well.) 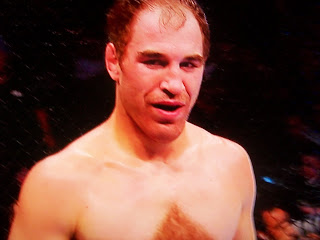 And so Scott and Al go on to their next adventure in Time and Space.
"Oh, boy."
YOSHIHIRO AKIYAMA VS. VICTOR BELFORT
It is the greatest entrance in MMA ever, rivaling Kimo's large cross entrance at UFC III, or Nagashima's CosPlay entrance for the K-1 Kickboxing Tournament (that he won, by the way, making his way to the ring three times dressed as a girl.)
Nagashima's Cosplay Entrance at K-1
http://www.youtube.com/watch?v=cYS-MCYbIlY
Now that's how its done, Hallman.
But back to Akiyama....
He comes out to the opera inspired "Time to Say Goodbye", featuring Andre Boccelli and Sarah Brightman.  Sung in Italian with some English, its a sweet and somber song, close to a dirge.
Akiyama and his team walk to the fight.  Before they get into the arena, the team takes a knee and does a deep and respectful 'O Rei'.  It's awesome. 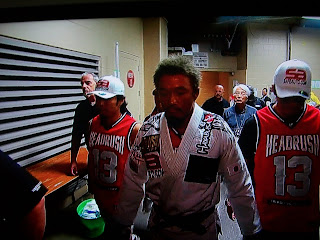 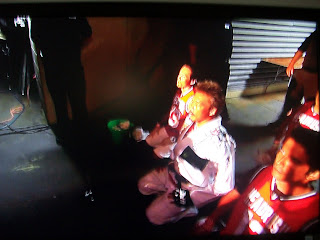 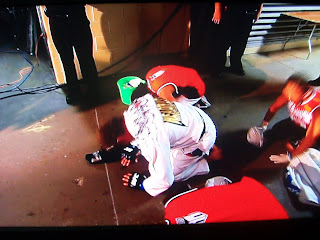 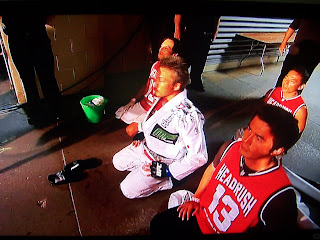 In the end, it was time to say goodbye to Akiyama for the night, as Belfort rushed him with punches, knocking Akiyama off balance.  That's always a start for Belfort's signature flurry, which he started and put Akiyama out. 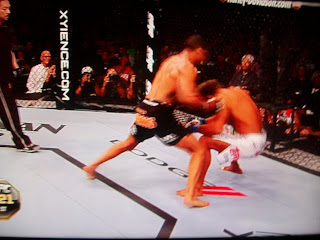 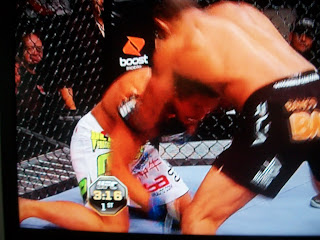 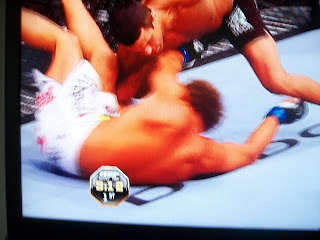 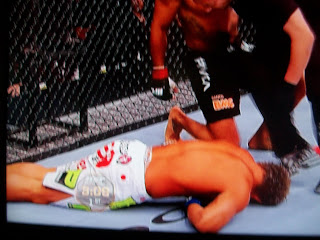 RASHAD EVANS VS. TITO ORTIZ
Rashad made short work of Ortiz, outpunching him with speed and power.
Rashad had Tito up against the cage and delivered a knee right to the heart.  It was such a hard knee that folded Tito over near the end of the round, putting him away. 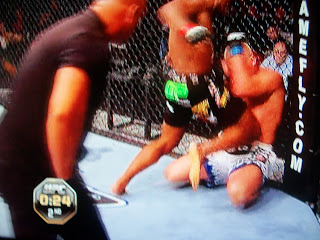 I'll call this historic kick "The Shart Heard 'round the MMA world", as a kick like that has plenty of bodily consequences.
For years, "Mean" Mark Callous was making people poop their pants with his vaunted "Heart Punch".
"Mean" Mark Callous Heart Punch
http://www.youtube.com/watch?v=Y0M8hOlmsxk
His heart punch is one of the most devestating ever.  Daizee Haze's punch is also pretty brutal as well.
In closing, to all the fighters that step into the cage and put it all on the line for our entertainment like in Ancient Rome, thanks.
======================
OTHER FIGHT BLOGS YOU MIGHT ENJOY:
It started hot, then got really, really slow.
UFC 130 Recap
http://zombiebloodfights.blogspot.com/2011/05/fights-ufc-130-excitement-in-reverse.html
In all fight sports, never leave it to the judges.  Ever!
http://zombiebloodfights.blogspot.com/2011/11/fights-pacquiaomarquez-iii-fallout-stop.html
Wanderlai "Glass Jaw" Silva
UFC 132 Recap
http://zombiebloodfights.blogspot.com/2011/07/fights-ufc-132-silvaleben-fabercruz.html
++++
Bowie Ibarra is the author of the "Down the Road" zombie horror series from Simon and Schuster and Permuted Press, and the upcoming "Pit Fighters: Double Cross" from Twisted Library Press.  You can find more information about Bowie and his books at ZombieBloodFights.com.
This has been a ZombieBloodFights.com production.
Posted by Bowie Ibarra at 9:53 AM