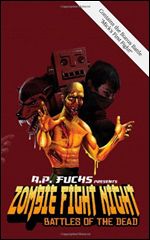 "Deadliest Warrior" is one of the hottest TV shows on Spike TV in the US.  In it, fantasy match ups go down featuring armies, legendary fighters, warrior tribes, and heroes of the fight world.  With scientific testing, they figure out who would win in a fight using a computerized algorithm with the information they attain.
AP Fuchs takes that concept and rocks it, even before the program was born, and brings a zombie slant to the concept.  Zombie Fight Night features a slew of fantasy match ups of fighting warriors taking on zombies.  But it goes deeper than that.
The story itself revolves around a dude named Mick who got in over his head at this zombie money-fight arena.  Mick gets in debt so bad that he is forced by the manical Russian owner of the fight club to bet on the fights not just for his money, but for his own life.
It's then that the fights become the centerpiece of the story.  Ninjas, superheros, werewolves, robots, Bruce Lee, sumo... pretty much any legendary fighter worth his weight in blood is booked to fight the zombies that range from shamblers to runners.
It's with that background that Fuch's takes great glee in putting the matchups together.  Providing just enough background on the people fighting the zombies to care whether they win or lose, the story jumps from Mick's decision to who he wants to bet on to the fights.  Blood, skulls, and zombies get crushed in specatular fashion, leading up to a wild swerve finish I didn't see coming.
I bought it a while back when it was on sale for a buck.  It was worth every penny.  At $2.99 on Kindle, if you like "Deadliest Warrior" and zombie gore, then this is the book for you.
========================
Bowie Ibarra is the author of the "Down the Road" zombie horror series from Simon and Schuester and Permuted Press.  His most recent release, "Codename: La Lechusa", is a violent tale of a mother that doubles as an assassin.
You can network with Bowie and find out more about his writing at http://www.zombiebloodfights.com/
This has been a ZombieBloodFights.com production.
Posted by Bowie Ibarra at 9:27 PM