FIGHTS: The Case against Kevin Nash in WWE and all of pro-wrestling...

A lot of buzz has developed over the return of Kevin Nash to pro-wrestling.  A lot of people are excited about that.  I am not one of those people.

This new WWE Universe might not remember some of the atrocious things Kevin Nash and his buddies in the NWO did to professional wrestling.  But I do.  And it's time they are reminded of that.

Kevin Nash was a part of one of the greatest events in pro-wrestling history.  But in my opinion, he was also one of the reasons the pro-wrestling many remember it to be died.  His return to the WWE is like finding out a family member or friend has cancer.  It needs to be treated or someone very special to you will die.

Brief history of some of the things Nash was known for before he hit it big and began his murder of pro-wrestling.  When he first hit the scene, he was saddled with being called Oz.  He came out with a big fake head and emerald colored clothing you could find in your grandmother's closet.  In short, he sucked.
﻿ 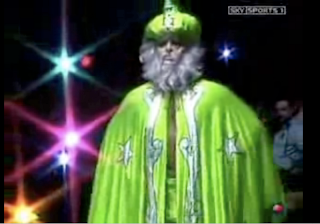 One thing Nash has is charisma and personality, a potentially deadly combination in pro-wrestling.  They gave him another name calling him Vinnie Vegas, a fun-loving, chatting gambler.  Long story short, he sucked. 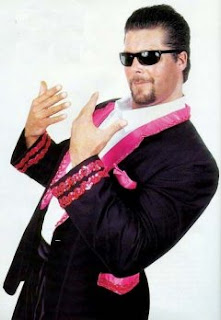 Shawn Micheals recounts in his book "Heartbreak and Triumph" that he saw something in Nash and invited him to WWE to help as his bodyguard.  Nash immediately lied to who he needed to in WCW to jump ship to WWE. 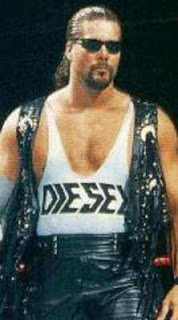 Nash went on to become Diesel, and did his best with his limited wrestling skills to get to the top.  Vince didn't like Shawn's little champion and put the title on big Diesel.  Shawn Micheals even mentions in his book how Nash thanked him for giving him his best match ever up to that point.

It was already a tough time for WWE, but Diesel did nothing to bring in more business.

In short, he sucked.

Then one of the biggest douchebags in pro-wrestling history and the mastermind behind the murder of the old ways of pro-wrestling, Eric Bischoff, took the reigns in WCW and started a long and expensive march to running a storied promotion into the ground.  He offered big money to Kevin Nash and his buddy, the troubled Scott Hall, to come over to WCW.  Like before, Nash followed the cash and jumped ship from the WWE.  "Razor Ramon" and "Diesel" were the hottest thing in WWE at the time, and WCW taking them away was a coup. 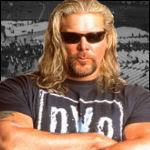 Bischoff came up with an idea of a 'Takeover', where WWE stars using their real names were taking over WCW, which made the organization go red hot within a few weeks.  Their attack on tradition, even going so far as to woo another egomaniac, Hulk Hogan, into the fold.  Bringing these two guys to power was the beginning of the end, as neither of them had a problem running the business into the ground, as long as they got paid.

My disgust for Nash peaked when The Four Horsemen were slated to take on the NWO in War Games: The Match Beyond.  The lead up was that the Horsemen needed a fourth teammate because legendary pro-wrestler Arn Anderson was afflicted with a spinal injury.  He asked another outstanding pro-wrestler Curt Hennig to take his 'spot' in the Horsemen as the Enforcer.  Curt was honored.

Then the NWO douchebags slap tradition, pro-wrestling, and the people who helped pave the way for them (Arn Anderson, Ric Flair, etc.) in the face with a sketch where Nash wore a neck brace and made Arn look like a crazy alcoholic.

When the NWO story was taking off, I remember what Arn Anderson said after beating up Brutus Beefcake with Ric Flair.  Arn quoted the Bible, saying, "When the New World Order is put into place, it signals the beginning of the end of time."  It's eerie how prophetic those word were.

Then, to top it all off, at War Games, Nash clowed around as if the event wasn't dangerous.  In the end, Hennig double crossed the Horsemen and Nash ordered Flair's head to be hit with the cage door after the Horsemen had surrendered.  And he threw it in the faces of the Charlotte crowd, the Horsemen's stomping grounds. 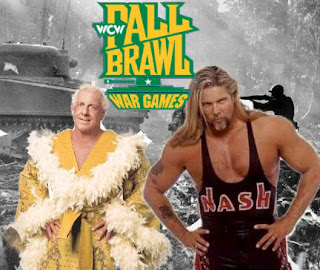 Then, on another knock on Mexican lucha libre tradition, he was signed to wrestling in a ridiculous matchup with him and Scott Hall against Rey Mysterio and Konnan in a Hair vs. Mask match.  Hall jumped Rey behind the ref's back and gave his team a win, giving the mask over to Nash.

And then Nash clowed the history and tradition of Rey by wearing his mask like a hat the next day.

I also want to make a note that at the height of the NWO bullshit, Nash was booked in a PPV against the Giant.  Nash no-showed the PPV because he claimed he was hurt.  Nash has made no bones that he had no problem faking injuries to ride the clock and get his guaranteed checks.

Then, in the biggest slap in the face to the history of the World Championship Belt and every fan of pro-wrestling, Nash let Hogan shove him with a finger to the mat and get the pin for the world title.  It became known as the "Finger Poke of Doom".  Disgusting. 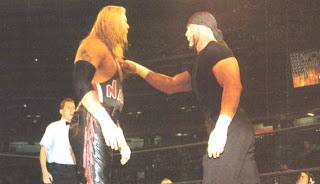 Let it also be known that Nash ended Goldberg's win streak, one of the bigget and most exciting stories at the time, by letting his buddy Hall hit Goldberg with a shock-stick for the win and the title.

So "Big Lazy" shows up at the WWE Royal Rumble '11, and I swear I was the only person in the entire room of family friendly WWE fans cussing and flipping off the TV in outrage.  This is 2011, not 1997.  Get the fuck off my WWE PPV.

Oh, and one of the people he attacked when he made it into the Rumble:  a remasked Rey Mysterio. 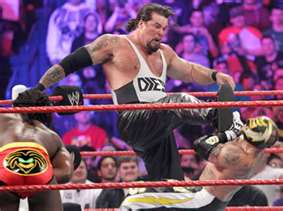 Fast foward a few months to Summer Slam '11.  Nash's poison comes in and ruins one of the most exciting and fun stories in a long time in WWE by jumping the amazing CM Punk at the end of his match with Cena. 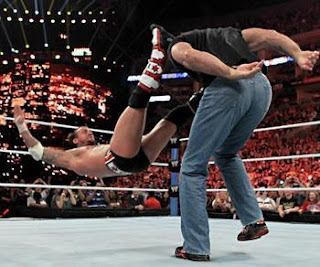 A few weeks later, Nash comes out and calls out HHH, but gets Punk instead.  Nash then insists Punk respect him by telling him "Thank You" for all he had done for the business.

Thank you?  For destroying pro-wrestling?  For killing off the only other mainstream alternative on TV?  For disrespecting the tradition of the World Championship Belt by losing to a finger poke?  By crapping on the history and tradtion of Lucha Libre by winning by screwing Rey over and not with skill?

Well, asking Nash to wrestle with any skill is a tall order.

If Nash has any integrity as a pro-wrestler, he'll have the guts to return from his so-called injury (there are those injuries again) and face CM Punk.

It' a chain reaction... OF PRO-WRESTLING EVIL!!
http://zombiebloodfights.blogspot.com/2011/03/fights-acw-chain-reaction-of-evil.html

You can network with Bowie and pick up his books at http://www.zombiebloodfights.com/

This has been a ZombieBloodFights.com Production
Posted by Bowie Ibarra at 5:56 PM