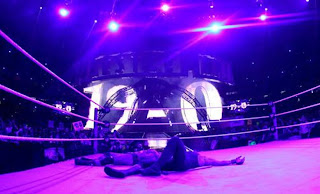 "Ain't no 'mania gonna keep my body down."
A lot has been said about WrestleMania 27.  I'm not sure what people were expecting that they thought it was so bad.  In my opinion, considering the Rhodes/Mysterio, Punk/Orton, Del Rio/Edge matches, it was actually pretty good.  I especially liked how Rey used the mask of Rhodes to deliver Mil Mascaras-style flying headbutts.
And Taker/HHH?  I thought that match was gold!
For a minute in, I thought it was just going to be a rehash of Michaels/Taker I and II.  But they had to up the ante in brutality with the NHB match, and they did.  The attacks and throws were vicious, and the chair shots were out of control.  And the strike to 'Taker's head.  Well, I think it was great.
For once in a very long time, a chair shot was used and it actually MEANT something.  Yes, 'Taker took it.  Yes, HHH let him have it.  Yes, 'Taker was hurt by it.  But he's been there before.  Albeit, a very long time.  But he's old school.  Chair shots to the head were a convention of old school wrestling that became way too much during the Attitude/Hardcore era in the 90's.  But I believe the use of the chair was justified in this match, and made it actually mean something again.  And the finish was perfect, considering HHH made 'Taker look like an animal that had just been run over in the road, seriously wounded, trying to sit up like he had for decades to no avail.
Personally, for me, all it needed was some blood. 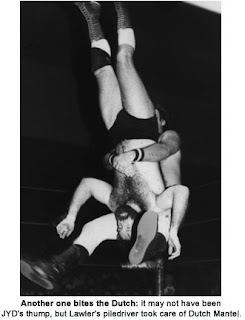 "That should have been Michael Cole, that sonovab**ch!"
Meh 'mania moments:  SnookiMania, Coorreee vs. Other guys, and the Rock in general.  The "host" concept for Wrestlemania clearly just made it Raw with a $50 price tag.  I could have done without the comedy spots, but I guess I can appreciate Vince giving wrestlers a chance to get a 'mania payday.
However, it was at the expense of Shemus/Bryan Danielson for the US Title.
Cole/Lawler?  Lawler deserved better.  And though I got the Fist Drop from the second turnbuckle, I was praying for a Lawler-style pile driver on Cole.
And the main event.  C'mon, now.
The Miz video package was great.  The choir of singers from, I guess, a local Georgia Pentacostal Church just needed (the ghost of) James Brown/Cleofus James and Shaka Khan, and (the ghost of) John Belushi breaking it down in a black suit with Dan Aykroyd, Blues Brothers style.
However, I don't know who the dude was who put together the Adobe Illustrator TitonTron of Cena's new color theme and decided a blue ribbon with white stars on a red field behind the new Cena symbol would not evoke some kind of Confederate flag/South will rise again imagery for Vince's Great White Hope.
All that aside, the match was alright and picking up steam when the "double count out" occured, bringing The Rock in to restart the match, only to punk Cena.  A main event title match at the grand daddy ended in a screw job.  Double-U Tee Eff?
Mania 27?  3 out of 5 stars, mostly for the main event getting ruined.  I still enjoyed a majority of it.
And then came Raw... 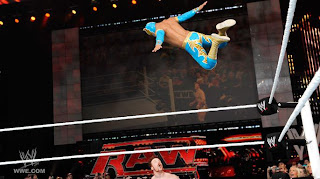 Somewhere, the real Mil Mascaras is smiling.
While the Monday aftermath of 'mania 27 was alright, I was looking forward to the appearance of Sin Cara.  I thought they might redo the Shemus/Bryan match, which they did.  But it was so close to the end of the show, I thought Sin Cara would wait until Smackdown.  But he came out and saved Bryan from the beating Shemus was giving him after the bell.
I have to admit, considering the promo videos, this had quite the potential to be a ShockMaster moment.  Whose the ShockMaster you ask?  Check out this video.  You only need to see the first few seconds to get it.
SHOCKMASTER DEBUTS, AND IS THEN NEVER SEEN AGAIN
http://www.youtube.com/watch?v=s3CL28vgE4U&feature=related
I have to admit, I was expecting a lot.  And when he ran to the ring, I prayed he would hit the trampoline correctly and not end up like those guys that hit the trampoline on Ninja Warrior.  In truth, he was athletic enough to hit the trampoline and make it over the rope in spite of an imperfect takeoff.  I didn't see him do the huracanrana and land on his feet, either.  Hmmmm....
It was all looking a little unspectacular until he hit a true, high lucha-style plancha on Sheamus that everyone finally came to their feet.  It was glorious!
Here's the official video.
SIN CARA DEBUTS ON RAW
http://www.youtube.com/watch?v=x1p89CRFj3s
Oh, and Cena and Rock are fighting at 'mania next year.  We'll see how that plays out.
In the meantime, Go, Sin Cara, go!
Oh, and learn English as soon as possible.
====
YOU ALSO MIGHT ENJOY:
The return of the Lethal Lottery
http://zombiebloodfights.blogspot.com/2011/06/fightsblood-acw-realization-of.html
A chain reaction of EVILLL!!
http://zombiebloodfights.blogspot.com/2011/03/fights-acw-chain-reaction-of-evil.html
++++++++
Agree?  Disagree? Comment below.
Follow the blog, or sign up for alerts on Twitter at @wingback20
Brought to you by ZombieBloodFights.com
Posted by Bowie Ibarra at 10:18 PM