"Your true friends will stab you in the front."
-Davey Vega
The roster of Anarchy Championship Wrestling is chock full of talented and fun wrestlers.  One of which is "Spitfire" Davey Vega.  I had a chance to talk with Vega about his life and times in wrestling.  Check it out. 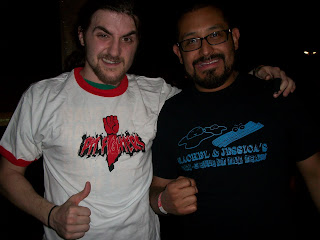 Q – Davey, I wanted to do a fluff piece with you, but after the last show, I’ve got to ask how you felt after the big tag team throwdown at ACW’s “Chain Reaction of Evil”? Specifically, what “Showtime” Scot Summers had to say to you? 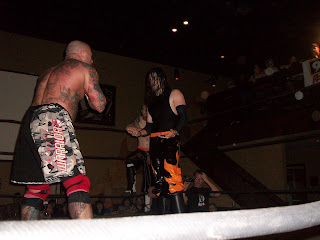 Vega and the "Best in Texas" Scot Summers about to mix it up.

Vega - The match was insane but I knew that going in. Whenever you step into the ring with Masada or Scot Summers, you know you’ll be fighting for your life. As far as what Scott said to me at the end of the match, it definitely struck a chord. I mean, you have ACW’s Heart in the middle of the ring putting his stamp of approval on you, letting you know he has your back if needed AND telling people you are the future of ACW…..it’s definitely an eye opener. 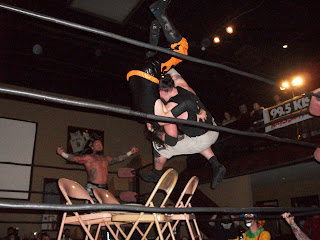 Masada and Summers opening Vega's eyes
Q – Now, I’ve got to ask what the deal was with your so-called friends, Pierre Abernathy, Evan Gelistico, and Gary Jay, The Submission Squad, after the match? Why did they attack you like that? 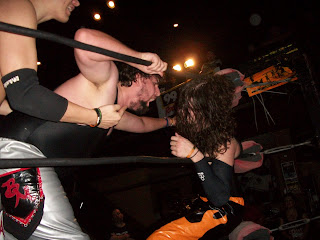 Abernathy and Gelistico of the Submission Squad, yelling at their "friend" Vega after the defeat.
Vega - I honestly haven’t come up with an answer to that as I haven’t gotten an answer from anyone but I’ll try to put it into my perspective. The Submission Squad always has been about the greater good of the Submission Squad, one for all and all for one. I think tempers flare a bit due to the fact that, for some reason or another, fans have taken a liking to me (possibly due to my antics, MAYBE my wrestling ability and heart). When that greater good is compromised, then there are conflicts of interest which are a no no. That’s as far as I’ve gotten with an answer to what happened. As far as them “attacking” me, I want it to be known that they didn’t physically attack me and that it was more of a verbal berating. I’m going to assume this happened due to us having the numbers in the situation and still not coming out on top.
Q – Are you still friends with them? I know they’re your brothers on the road. But did ya’ll sort things out afterwards?

Vega - Yea we are still friends. I feel that what happened was more in the heat of the moment than them disliking me or what I do. I’m a pretty forgiving person too so I wasn’t mad at them for long. I guess that’s the perks of traveling with people you consider family. 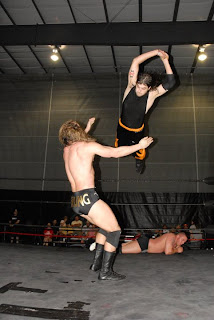 PLANCHA!!!
Q – When did you get into wrestling?

Vega - I started watching wrestling sporadically when I was 8 years old then constantly when I was 11-12 range. I started training to be a wrestler in January of 2006 and made my debut in December of 2006.

Q – How would you describe your current journey in the wrestling world?

Vega - My current journey in wrestling is a learning experience on acid. You never stop learning in wrestling and I feel that keeps me sharp but then you just have those weird moments with people or things that happen at shows that are ingrained into you for an eternity. For the record, I’ve never taken acid but I can only assume what I’ve gone through in wrestling is close to what an acid trip is haha.

Q – You’ve had a chance to face some big names on the national and international scene. Tozawa. Davey Richards. Are there any other match-ups like these on the horizon? 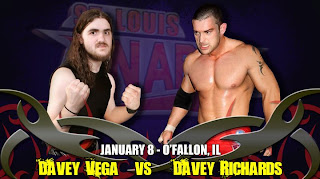 Vega - Reading this question and answering it is crazy. I used to watch a lot of these wrestlers (Richards, El Generico, Arik Cannon, and Jerry Lynn) before I even became one and it’s so surreal that I’ve been in the ring with them at this point. I feel that as long as I keep improving and showing everyone I deserve to be in the ring with these guys then yea I think there are more of these matches on the horizon.

Q – Have you considered traveling to Japan or Mexico to wrestle and train?

Vega - I think about this on a daily basis. Training in either of these places would make me a happy person. The amount of knowledge that I would gain from either of those places would be tremendous. I’ve done an extended stay at the Chikara Wrestle Factory and that was an enlightening experience so I can only imagine the experience factor of Japan or Mexico.

Q – What is your signature finisher? How do you like to set that up?

Vega - My finisher is the V-8(Air raid crash). Normally I just hoist them into it from a standing position but that seems to be getting countered more frequently so I’ll have to go back to the drawing board.

Q – Who are some Indy Wrestlers you enjoy watching?

Vega - I enjoy a little bit of all of this stuff but too much blood is overkill. 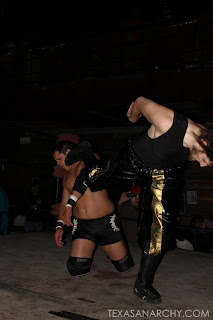 Chris Adams-style superkick!
Q – If you could put together a dream match between wrestlers from any era, what would it be?

Vega - Hulk Hogan vs Kenta Kobashi would be insane.

Q – If you could attend any wrestling event in history, which one would it be?

Q – What would you like to tell all the fans who cheer or jeer you?

Q – If you could book yourself into any wrestling match anywhere in the world, where would it be and who would you wrestle?

Vega - Madison Square Garden or Tokyo Dome (can I have 2??). I’ve never been one to put myself in the ring with someone of higher caliber so I’ll leave it up to the fans to decide who I wrestle.

Q – Where can people find more about you and what you are doing?

Vega - People can email me at DaveyVega85@gmail.com or catch me on facebook keyword Davey Vega.

Q – Any last words for the fans?

You can see Davey Vega and the other stars of ACW at Mohawks in Austin, Texas this Sunday.  Doors open at 5:30.  Tickets are ten bucks general seating, and fifteen reserved.  And there's beer there.  Lots of it.

Here's me trying to tell Vega not to go on with the DeathMatch with Masada, courtesy of MadAshSamuels YouTube page: