ACW, a mind-erasing birthday bash, and a smart phone used as a weapon.  Yeah, that's the Cliff's notes version of my experience at Anarchy Championship Wrestling's Annual Peace, Love and Anarchy show.

Here's what I've pieced together throughout the week in what I documented with my camera.

Lady Poison and "The Goddess" Athena threw down for the Joshi Title. 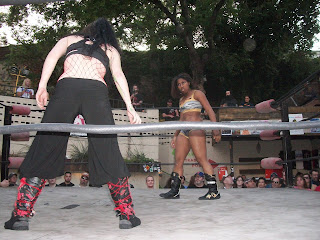 ACW Joshi's
From what I can recall, both brought the action, with Athena hitting Poison with double flying knee off the rope.  But, it was a well timed "Poison Kiss" by The Green Death, Lady Poison. 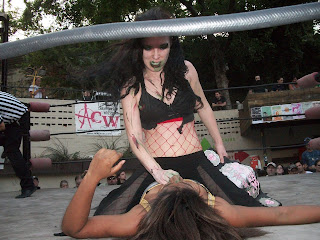 "Violated"
And now, an update from my Davey Vega blog.  Looks like he is seperating himself from his Submission Squad brothers after all.  The dastardly Pierre Abernathy and Evan Gelistico had this to say to their friend:

Submission Squad and Vega draw lines in the sand... and me being very obnoxious.

And, naturally, with a tag team partner in the form of "The Son of Anarchy" Matt Palmer, it was now on! 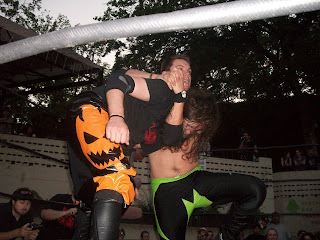 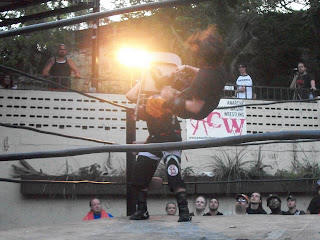 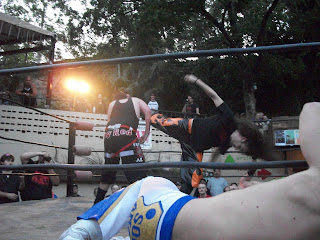 Chris Adams-style Superkick on "Big Red"(WTF?) Pierre Abernathy
Vega and Palmer took the victory over the St. Louis rogues.  But then, Vega had this to say afterwards.

Vega throwing down the gauntlet

Then those SOB's of The Takeover came out.  I'm not sure what was going on at this point. 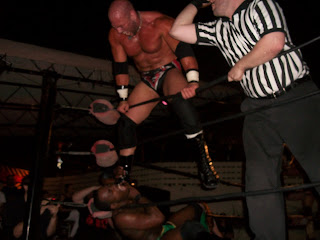 "Booooo Biohazard Jaykus Plisken"
Then Scot Summers took the call for an absent Masada and took it to Submission Squad member, Gary Jay, in a Hardcore match. 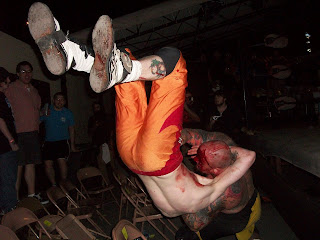 "A sweet mix of science and hardcore.  Summers Suplexes Skinnyman into chairs.
I was so blitzed, I knew enough to move.  But my iPhone had fallent to the ground.  Little did I know, Summers was about to use it as a weapon. Gary Jay kicks Scot Summers in the face as he picks up my white OtterBox encased smart phone. 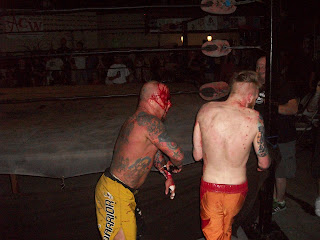 Summers swats Skinnyman with SmartPhone.  My SmartPhone.
You won't get that with WWE!
Here's actual video footage of the moment above.  The video starts just where Scot picks up my phone and whacks Gary Jay with it.  It's taken from a fan cam.
Summers/Jay final moments
http://www.youtube.com/watch?v=Hxwn-3BIBUg&feature=player_embedded
I remember someone handing the phone back to me, covered in blood.  I wiped it off and replaced it on my belt, so blitzed that I didn't realize he had used it as an offensive weapon until I viewed these pictures. 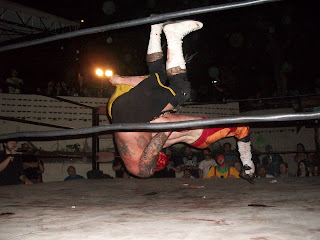 It ended up back in the ring with Gary Jay utilizing some science and strength to get Summers over with a tremendous throw. 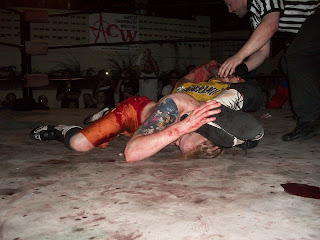 But in the end, the ring technician Scot "Showtime" Summers finished the match with a scientific juji-gatame armbar.  I thought Summers was going to take the arm home with him, as I remember cheering for his victory.
Portia Perez competed in a match I vaugely remember.  Video footage found days later show that I lifted up my shirt and asked her to chop me.  She moved away in disgust, accompanied by her pet robot, Super-Electro.  That footage I'm going to go ahead and keep to myself.  I was at the height of "Release the Kraken" mode, and it's a little embarassing. 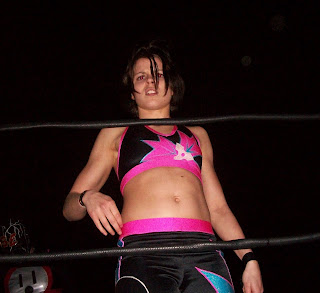 Portia (to me) - "Don't lift your shirt up like that again, you Drunxican" 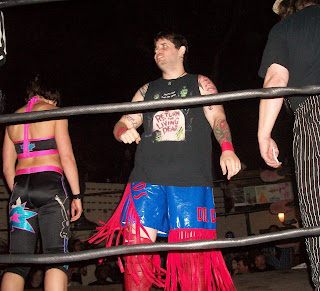 Apparently, I admired "The Father of Pain" Darin Child's new shirt.  I think his choice was an amazing pick from his last shirt.  I sincerely hope he continues to choose cool new shirts and retire the mangled and dirty white one.  This shirt pick receives my five star award for best of show-shirt division. 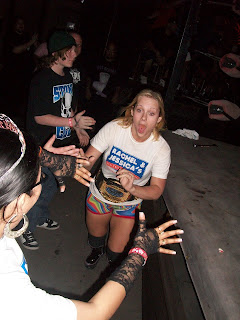 Then, apparently, Rachel Summerlynn came to the ring.  I guess she was part of the match.
Then, I think, my battery ran out.  I somehow had enough battery to take a picture with Paul London later, who was a kind man to my drunken self.
I seem to remember singing the chorus of "Major Tom" to him when he was in the ring as I took in his ring attire. 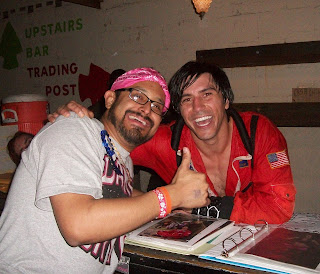 And I also picked up a Slim Sexy bandana somewhere along the way.
As always, to all the wrestlers I cheer and jeer, thank you.  And I sincerely hope you'll forgive me for being particularly obnoxious this past show.
=============
Get blog updates at @wingback20
This has been a presentation of ZombieBloodFights.com
Posted by Bowie Ibarra at 4:21 PM