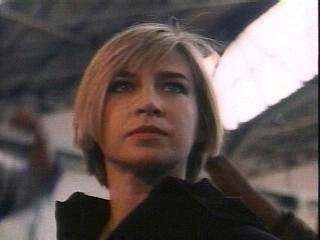 I do have to admit, although I am a martial arts movie fan, I have never watched a movie featuring Cynthia Rothrock.

As that same fan, however, I did know that she made a lot of movies and had legitimate martial arts street cred through the various martial arts magazines I read back in the day.

Last week I posted a blog about Gina Carano on the cusp of being the first true American female martial arts star since Cynthia Rothrock.  You can read the entry here. 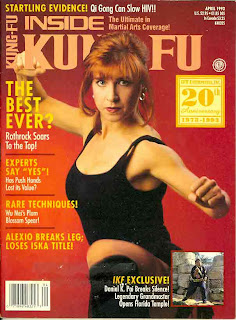 I like to think my subsequent message to her asking for an interview influenced her to contact the NY Daily news to submit her response to my message.  You can read Cynthia's commentary on the importance of Gina's upcoming movie "Haywire" here in her submission to the NY Daily News.

Thanks to the boys and girls at "Wildside Cinema" Facebook group, I was able to get suggestions from hardcore movie fans about what some of Cynthia's best movies were.  Here's a short list to get you started, with some clips to go with it as well.

In my research, I found this great fight scene from her first movie, "Yes, Madam/Huang jia shi jie", also known as "Police Assassins".  In it, Cynthia plays Inspector Carrie Morris of Scotland Yard, fighting crime with Hong Kong action star, Michelle Yeoh.  The final fight will blow you away.  If you only watch one clip from the selections below, let it be this one.

You can see the final fight of "Yes, Madam/Police Assassins" here.

One movie that was listed was an outing by Golden Harvest called China O'Brien.  It comes across as a 'Walking Tall' plotline with a woman instead.

Here's the trailer to China O'Brein.

"Triple Cross" is another movie that was mentioned by fans to be a good one.  It was called "Angel of Fury" in the US.  Here's the trailer.

Yet another respected movie by fans is "Righting Wrongs", retitled "Above the Law".  Here, she fights "Karate Diva" Karen Shepard, a notable martial arts fighter with some movies, stuntwork, and TV shows under her belt as well.  Karen turns her belt into a chain whip.  But you know by now when Cynthia gets a hold of a staff, it's lights out.  Here's the chase and fight with Karen Sheperd.

And here's a final clip from "Magic Crystal", where she takes on the acclaimed martial artist Richard Norton.  She busts out some Eagle Claw here in the final boss fight of the movie.

To find out more about Cynthia Rothrock, check out her official site CynthiaRothrock.org.

You can also network with Bowie at his website, ZombieBloodFights.com.
Posted by Bowie Ibarra at 8:31 AM