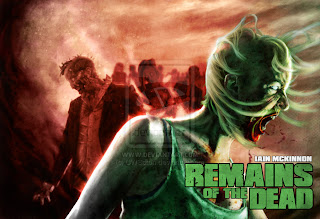 Every zombie fan in the nation is counting down to the World Fair of Zombies, ZomBcon.  The event will be going down at the Sea-Tac Hilton in Seattle this weekend, October 21-23, 2011.

People from around the country and the world will be in attendance, including Scottish author Iain McKinnon of Permuted Press.  Iain has traveled from his home in Scotland to the states to participate in the event.

Out of pocket at the moment as he travels the U.S., ZombieBloodFights.com has taken the liberty to talk up Iain's works with information from his website, http://iainmckinnon.weebly.com/index.html 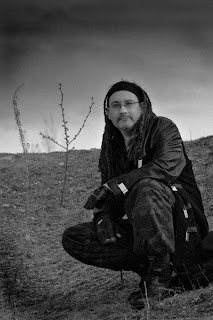 "Iain Mckinnon was born in Scotland in the early seventies and lived a happy well balanced childhood, with the exception of being forced to wear flares and the 1978 World Cup.

Aged 18 he saw George A Romero's Day Of The Dead and from then on zombies crowned his list of irrational fears.

In 2005 he wrote the screen play for the 10 minute zombie film The Dead Walk in an attempt to confront his fear and get a restful night's sleep.

Unfortunately although his plan worked and he lost his fear of the undead at the same time his wife gave birth to their son and he hasn’t had a good night's sleep since.

Iain currently lives and writes from his home just outside Edinburgh. At the moment he only has one irrational fear but he does still keep a survival kit and crowbar close at hand just in case."

Iain will be featuring his book, "Remains of the Dead" at the Permuted Press booth.  Come welcome Iain to the states and visit with him with all the other members of the Permuted fun bunch. 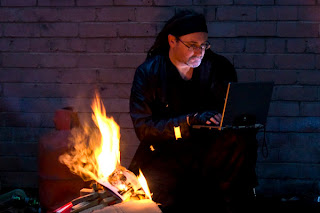