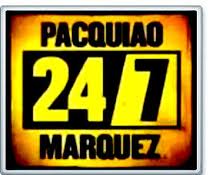 This superfight is on the way in just a few short weeks, and the lead up has been great.

This episode talked up Manny's charity work back in the Philippines, helping to finance citizen's fishing boats and providing funds for a large-scale hospital and helping local schools.  He has earned enough cash through his fights to help people back home, and provide for himself a Ferrari as well.  He gets a chance to drive the car near the end of the episode.

Marquez is also working hard, and has fought and earned money for a small fleet of cars back in Mexico. Five cars are featured, but he can only drive four of them, as his wife is the only one that drives the BMW.

Marquez is also training hard as well, and has made some adjustments to his training via new strength and conditioning coach.  Coach Hernandez earned his degree at A&M, and has altered some of Marquez's workouts so he can keep his speed and flexibility, but add weight.

In the end, its yet another great episode leading up to the fight that you need to watch.

Bowie Ibarra is the author of the "Down the Road" zombie horror series.  His upcoming books, "Pit Fighters: Baptism by Fire" and "Pit Fighters: Double Cross", are combat sports-themed books.

You can keep up with Bowie and network with him at http://www.zombiebloodfights.com
Posted by Bowie Ibarra at 6:46 PM