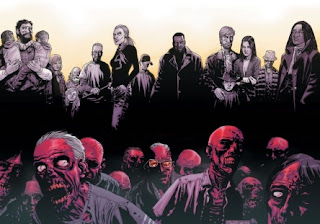 Sunday night has come and gone, and yet another great episode of "The Walking Dead" has played to its legion of zombie fans.  In brief, the little girl is still lost, it appears that Shane needs to just keep his mouth shut before people can smell the guilt on his breath, the boy recovers from the gunshot wound, and a little reminder of a story gap involving Daryl from last season is teased with the discovery of a rare "Cherokee Rose".  The symbolic flower was a great metaphor for the plight the group is in.

There was also a dead guy in the water well of the farm that the fun bunch thought would be a good idea to pull out.  Well, apart from the already open wounds on the zombie that had passed on enough blood-bourne pathogens to infect all of Asia, they decided to try to pull it out.  That didn't turn out so well.

But one of the fun parts of the show was when Glenn went into town with the 'farmer's daughter', as he called her.  He was sent on a mission by Lori to find a 'feminine product'.  While he found it at the pharmacy with Maggie, the "FDILF" if you will, his dream comes true as he accidentally had a box of condoms in his hand and Maggie caught him with them.  It didn't take much for her to pitch a little afternoon zpoc delight in the pharmacy with Glenn, who gladly obliged.

Let's face it, people.  The zpoc is going to suck.  And when you have some down time away from the terror of the dead rising from the grave to attack the living, you're going to want to relax.  We're humans.  We have human emotions and will always have human impulses we have to deal with.  We're still wired to survive, and part of survival is reproduction.  And if the product of reproduction wasn't so much fun in its initial stages, we wouldn't be here right now.  It's a fact that the joy of sex perpetuates our human existence.  That's part of evolution.

I appreciate The Walking Dead for including this very human theme in the story.  It's a theme that I explored in the zombie title "Down the Road".  Some people didn't quite appreciate those elements of the classic Permuted Press title.  Admittedly, the moments could have been carved out better to tell the story.  But they were included nonetheless.  I make no apologies for them.  Those things happen.  People have sex.

C'mon, they're young and could be eaten alive tomorrow.  Why not?  It's the old "who would you do if there would be a nuclear war" fantasy come to life in the ZPoc.  I might be a little sick in the head, but I know for a fact I'm not the only one.

The upcoming zpoc is, predictably, going to be quite horrible.  In spite of that horror, its nice to see two adults living in the moment, being responsible, and remembering what it's like to be human again in a world filled with the dead.

Also, on that reproduction/survival note, the feminine product Glenn brought back was a birth control kit.  It looks like Lori's knocked up by Shane.  Her man still has no idea about their fling during his time in the hospital.

If you like zombies and great storytelling, tune it if you haven't now.

And here's to you, Glenn and Maggie.

Andrea, come back and do laundry, Andrea.  Andrea.  Andrea, I'm talking to you.  Andrea.
'The Walking Dead" episode 5 recap
http://zombiebloodfights.blogspot.com/2011/11/zombies-recap-walking-dead-chupacabra.html

The most controversial episode from 'The Walking Dead'.  Well, one of many from the 2nd season
"The Walking Dead" episode 3 recap
http://zombiebloodfights.blogspot.com/2011/10/zombies-double-cross-walking-dead.html

Bowie Ibarra is the author of the zombie horror series, "Down the Road" from Permuted Press and Simon and Shuster.  His most recent book, "Codename: La Lechusa" is a supernatural action/adventure story featuring a single mother who is an assassin by night.

Pick up a copy of Bowie's zombie books at http://www.zombiebloodfights.com
Posted by Bowie Ibarra at 4:03 PM