by Bowie Ibarra
ZombieBloodFights.com is proud to welcome avid book reader and editor Doree Anne to the ZombieBloodFight pit.
"He who fights with monsters might take care lest he thereby become a monster. And if you gaze for long into an abyss, the abyss gazes also into you."  == Nietzsche

ZombieBloodFights - It’s great to visit with you, Doree. Now, you’re in the editing and proofing business. What are some common mistakes writers tend to do consistently that get your goat?
Doree Anne - Thank you for this Bowie, it’s an honor. What gets my goat? It’s been a long time since I heard that one. I have to say weapon and character consistency is at the top. Sometimes, I read a manuscript and the weapons are not fitted for a scope or a revolver has a clip. Or a character that didn’t have a cell phone gets one out of nowhere. Or sometimes, it’s just simple comma placement. It’s very easy to create a run on sentence.

ZBF - You clearly have read a few books from your work. What are some upcoming books zombie readers should be looking for?
DA - Well, there are quite a few. I’ll recommend my favorites. Craig DiLouie’s Infection has a sequel to come out in early 2012 called, The Killing Floor. Mark Clodi is currently working on The Zombie Chronicles 4. It’s a much different take on the traditional zombie but it really scared the crap out of me. Mark Tufo is currently working on the Zombie Fallout 5. Mark has a way with wit and sarcasm that is very entertaining. The suspense will keep you restless. I am currently working on the edits for Zombie Dead by Ian Woodhead, which is about to release soon. Of course, I am looking forward to the release of Big Cat.
ZBF - Tell me a little bit about Brains Magazine and its contribution to zombie culture. 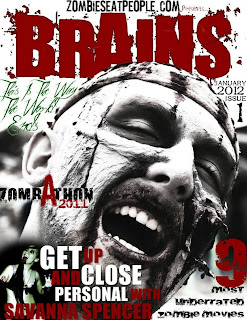 DA - The magazine is set to launch in January 2012. The first issue is being put together as we speak. It looks seriously impressive. Chris Beier is the owner of ZEP (Zombies Eat People) and has quite the creative eye and many contributors with a vast knowledge in all things zombies. I also plan to get written interviews from talented writers in the zombie genre. BRAINS Magazine will be the absolute in all things zombie, from primitive Survival to modern comedy. It will have crossword puzzles and a full comic strip. An appreciation for the female anatomy with zombie centerfolds for the guys, short story contests, to a study of the mind by a psychologist AND SO MUCH MORE!

ZBF - Is Brains Magazine an extension of Zombies Eat People, or are they separate entities?
DA - Brains Magazine is a magazine sponsored by ZEP. The magazine and the website are two separate entities. The website for ZEP is more or less the publisher for the magazine. (zombieseatpeople.net & http://www.facebook.com/zombieseatpeople)
ZBF - Tell me a little bit about your work with Zombies Eat People?
DA - My work with ZEP consists of editing and proofing inside articles and outside written contributions to Brains Magazine. Chris has many creative directions he would like to take both the website and magazine. The website will include a blog, where I would like to post book reviews and top picks on all books relating to a Zombie Apocalypse. I am also an Administrator for their Facebook page where I can also post on ZPOC related subjects.
ZBF - In your opinion, what should authors be aware of when putting together a good zpoc story?


DA - In my opinion, Bowie, I believe a good ZPOC story should be intense and suspenseful. It should have that component that helps you relate to the characters and become attached to them, to root for them. I also think that writers shouldn’t be afraid to kill a character off even if they are one of the main characters or just some passerby. It’s a colossal plus if the writer can be as gory and bloody as descriptively possible. I also love when an author can take a ZPOC and give it a horrifying twist. Like for example, zombies that adapt, can open doors, or evolve by using cognitive and motor skills again. I guess, what I mean a good ZPOC story is to me, where the writer holds nothing back, breaks the mold and lets their talent shine.
ZBF - What are readers of zombie horror looking for?
DA - Some of the readers I talk to are looking for more blood, guts and gore. I’ve had a few say that most ZPOC book characters have no clue that a zombie apocalypse is happening or are just plain nosey and clueless and this annoys them. With the genre quickly on the rise almost everyone knows what a zombie is. I myself would have to agree, I would like to see a zombie slayer rise up and kick butt off the rip. For most of the readers it comes back to blood, guts and gore.
ZBF - What is a quote you like?
DA - Ahh, you’d have to be specific. Are we talking books or movies? I’ll give you both. My favorite movie quote is from the original 1978 Dawn of the Dead by George Romero. Francine, Stephen and Peter are talking about why “they come here”, to the mall. Peter says, “They're us, that's all, when there's no more room in hell.”  Stephen says, “What?” Peter tells him, “Something my granddad used to tell us. You know Macumba? Voodoo. My granddad was a priest in Trinidad. He used to tell us, ‘When there's no more room in hell, the dead will walk the earth." That gave me the chills and nightmares that stuck with me to this very day. “They're us, that's all, when there's no more room in hell.”


My favorite book quote is from Friedrich Nietzsche, Beyond Good and Evil.
“He who fights with monsters might take care lest he thereby become a monster. And if you gaze for long into an abyss, the abyss gazes also into you.”

ZBF - So what’s your pick? Zombies, Blood, or Fights?

DA - I’d have to say ZOMBIES! Without them there would be no blood or fights!


Thanks again, Doree.
=======
YOU MIGHT ALSO ENJOY THESE BLOGGER RECOMMENDATIONS:
Great book reviewer, great interview.  Check it out.
http://zombiebloodfights.blogspot.com/2011/04/fights-book-lover-wenj-of.html
Good news everybody!  We found Sophie!
ZombieBloodFights blog takes a look at the mid-season finale of "The Walking Dead"
http://zombiebloodfights.blogspot.com/2011/11/zombies-recap-walking-dead-pretty-much.html
Reviewer of great horror movies, leader of BonerJams, and loves bush, boobs, and blood.
He's Bryan Schussler of Shu-Izmz, and he visited the ZBF Pit for an interview
http://zombiebloodfights.blogspot.com/2011/06/blood-made-of-awesome-bryan-schusslers.html
+++++++++++
Bowie Ibarra is the author of the "Down the Road" zombie horror series.  His upcoming book, "Big Cat", is about a killer animal roaming the south Texas countryside, and the two friends who are thrust into a hunt for the monster.
You can keep up with Bowie at his website, http://www.zombiebloodfights.com
THE MACHINE RECOMMENDS...
Posted by Bowie Ibarra at 6:13 PM