By Bowie V. Ibarra
The views expressed in the following blog are of the owner of the blog and not of any of the associates of the promotion of Anarchy Championship Wrestling 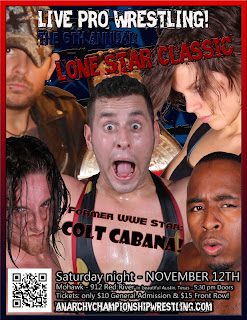 If you claim to love pro-wrestling and live in the Austin area, then there's no excuse for you to miss out on this next event.
The Anarchy Championship Wrestling tradition takes center bar this Saturday at Mohawk's  in Austin yet again.  The Lone Star Classic 2011 is tuning up to be another great night of wild action and great fun with the ACW SuperStars.  Here's what's on tap, apart from cheap pints of Hamm's, Coors Original, and 32's of Miller High Life that flow like a river.  And there's a lot at stake this year than just being crowned the LSC'11 Champ.

You read that right!  The meglamanical metro-emo Darin Childs could potentially lose his title by the end of the first round.  And the competition is stacked.

Before we get to the preview and predictions, lets talk the non-tourney matchups:

In a non-tournament bout for a shot at the new champ, four competitors vie for the title shot.  The sensible Davey Vega takes on the not-as-sensible Matt Palmer, vs. the batshit crazy wildman Scot Summers vs. the certifiable insane hardcore maniac, Masada.  Winner gets a shot at the LSC'11 title holder.

I have to say I think all these guys are great, and some of my favorites to watch every time I come to ACW. With that said, as I intimated above, Vega is the most sane of the bunch here, which really plays against him this time around.  Palmer pushed him over the edge when Vega won the title, but that was one-on-one.  And Vega has put it on the line against Summers and Masada, earning their respect.

But there's an old expression that says, "When a sane dog fights a mad dog, its the mad dog's ear that's clipped".  My pick is the certifiably insane Summers, who could take it if he lets Palmer's vendetta against Masada play out, letting them beat each other into oblivion, Summers can then match science with Vega.  If he can keep Vega grounded and use his power, he could take it.

EVAN GELISTICO puts his St. Louis Anarchy Title on the line against the always game MATT FITCHETT.  Fitchett has been great, but I think the dastardly Gelistico will counter Fitchett's wild style with science and take the win.

ATHENA puts her title on the line against the angry Inuit ANGEL BLUE.  Athena has fought long and hard to get her hands on the title, and I don't see her losing it any time soon.  Athena takes it.

The Lone Star Classic 2011 First Round Matchups
The opening round matchups were announced today, and here's a preview and predictions:

ACH vs. Colt Cabana vs. Bolt Brady
Great opening round matchup between some well-conditioned superstars.  Bolt has done some good work throughout Texas, and he seems to be adjusting to the wild nature of the ACW arena.  ACH has done nothing but improve and grow since I first saw him take on the always dangerous resident asshole, Jaykus Plyskin, two years ago at the annual Christmas bash, and has been synonymous with ACW for the past year.

But the Fightin' Israelite, Colt Cabana, has seen it all, and will be an unfamiliar opponent to Brady and ACH if they haven't really sat down and studied tape and YouTube clips of Cabana.

I see a great battle between these three, but I put my money (no pun intended) on the wild Jew, Colt Cabana, who will advance.

GARY JAY vs. SLIM SEXY vs. PIERRE ABERNATHY
Considering that Gerald James and Pierre Abernathy are tag team partners, you would think Slim Sexy would not have a chance here.  But I believe Slim could take this one with a combination of his power advantage and being one step ahead of the Submission Squad buddies.  Pierre and Gary have been known to play too much while in the ring.  And though having fun is a big part of it, if their eyes are not on that ultimate prize of taking Child's Title away, Sexy is going to beat them.

The key here will be how much Sexy will have recovered from his battle with Childs at Fun-Fun Fest, as Child's power put Sexy to the test.

SHAWN VEXX vs. JT LaMOTTA vs. HIGHROLLER HAYZE (w/ChrisTrew.douchebag.tv(?))
Shawn Vexx can bring the heat when needed.  You need to look no further than his most recent match with Scot Summers to see that.  And JT LaMotta has no problem hanging with some of the best in pro-wrestling.  He might be a dick, but he proves again and again each time he steps in the ring that he's an amazing athlete that will do what he has to do to win.

It's the upstart Highroller Hayze that will determine the outcome of this match.  He's been on the rise as of late, bringing a cruelty and brutality to the ring that is part technician, part sadist, all crappy tattoos.  The acquisition of his wrestling contract by the notorious anti-hipster hipster douchebag, ChrisTrew.tx.edu/~junkie.com and his stable, the so-called "The Business", has raised his stock in ACW.

If Hayze can focus his attack on what made him a strong up-and-comer by matching Vexx's speed and LaMotta's cruelty, which he is completely capable of, and ignore his manager's cockamamie business decisions at ringside (at least in the first round), Hayze might take this.

But if his unqualified and unscrupulous manager tries to make an executive decision that takes Hayze out of his rhythm, then Vexx takes this one.  I just don't see LaMotta, coming back strong but with ring rust, getting a win here on lazy legs.

PORTIA PEREZ vs. RACHEL SUMMERLYN vs. DARIN CHILDS
After Fun Fun Fest, Slim Sexy tweeted at how amazed he was at the power of Darin Childs.  And that's what could initially have anyone see the obvious winner of this match 'could' be.

But you have to consider Rachel Summerlyn.  She can match most men in ACW strike for strike.  She also needed to be put through a barbed-wire barrier (of her own creation) against ACW madman Scot Summers to be put down for the pin.  That was in a grudge match a month after she split open Summers like Jason in a Friday the 13th movie before choking him out in the middle of the blood-stained ring.  She can compete, power-wise, and might hold the edge in being able to take it to that next level, especially against men.

Perez, who is in phenomenal shape with bullet-proof abs and 'guns' that make my arms look like toy pistols, will dominate the speed game.  She will have to use that advantage to negate Rachel and Darin's power.  And it might be a bad idea for her to use that damn wrench, as Childs and Summerlyn have no problem escalating the conflict with weapons of sinister design.

With that said, Perez has one advantage.  In spite of his hardcore metro-emo image, Darin Child's has shown multiple times a soft-spot for the Queen of IHOP, Summerlyn.  Multiple times, Childs has hit the ring when Rachel was under attack, or had been injured.  He's shown great concern for Rachel, telling me there's some kind of hearfelt concern for her.

If Perez can exploit that somehow, take Childs out of his game by hurting Rachel, Perez might be able to take the victory.  Considering the lengths Perez has gone to recently for victory, Childs needs to get his mind right and decide if something like that should happen, what matters more to him:  His friend, or his belt.

If not Perez, Childs takes this one.

After that, its all up in the air.  I'm not sure how the matchups will be set up after that.  But I do believe, by the end of the night, if he can finish his matches as fast as possible, Slim Sexy will take the bragging rights of being  Lone Star Classic '11 winner and new ACW champ.

If you haven't done it yet, go to the ACW website and cast your vote in the poll on who you think will take ACW's Lone Star Classic '11 here:  http://darinchildsfallfromgrace.blogspot.com/


YOU MIGHT ALSO ENJOY READING:
The Scot Summers Birthday Bash 2009 Retrospective and DVD Review
http://zombiebloodfights.blogspot.com/2011/11/fights-mr-showtimes-birthday-bash-2009.html
ACW brings back the Lethal Lottery to wild results.
http://zombiebloodfights.blogspot.com/2011/06/fightsblood-acw-realization-of.html
++++
Bowie Ibarra is the author of the "Down the Road" zombie horror series from Simon and Schuester and Permuted Press.  His upcoming books, the re-release "Pit Fighters: Baptism by Fire" and "Pit Fighters: Double Cross" feature combat sports themed action and adventure.

Network with him and get his books at http://www.zombiebloodfights.com
Posted by Bowie Ibarra at 6:52 PM