BLOOD - Jude Felton rises from the "Lair of Filth" to talk to ZombieBloodFights.com!

by Bowie Ibarra
"If this style of movie doesn’t usually float your boat there is probably not too much that will change your opinion. However, fans of batshit crazy Japanese mayhem will lap this up. It is the perfect party movie to watch with your own legion of the undead."
== Jude Felton, from his review of the Blu-Ray release of "Helldriver"
ZombieBloodFights blog is proud to present one of the best reviewers of horror on the web today.  His reviews have been featured at WildsideCinema.com and TheLiberalDead.com, as well as his personal review page, lairoffilth.blogspot.com.  Please enjoy the following interview with Mr. Jude Felton. 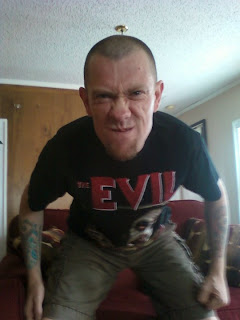 ZBF:  Jude, I hope you are well. And I got to start with this question. There’s been a real transition from the 80s horror I remember into the 90s and today. The most recent outings seem to have an emphasis on torture and nihilism. Granted, I haven’t seen most of them, but what are your thoughts on this recent trend in horror as compared to its predecessors?
JF:  Hey Bowie, I’m doing great thanks!  Am digging this question as it’s something that has been on my mind recently. I think for the main part horror flicks seemed to be more fun back in the 80s/90s. Sure they were violent, they’re horror films after all, but I think there was more of a detachment; you knew you were going to see a film. Now I think there is a definite shift towards ultra-realism and an underlying cruelty to many horror films. Don’t get me wrong, there are many that I thoroughly enjoy, but I do find myself looking for that fun-factor sometimes. There’s also a case of overkill, as in any era, with the success of the Saw and Hostel franchises there have been many flicks made that don’t so much as worry about a story, rather just trying to shock viewers.

ZBF:  Are we also moving towards extreme horror with releases like “A Serbian Film” and “The Human Centipede” franchise?
JF:  Truthfully I believe that the extreme influx has kind of had its day, to a point. There’s always going to be someone somewhere with a great idea to stir up the pot. However, I think we are going to see more scare-based flicks coming along in the wake of Insidious and the Paranormal Activity movies. Hopefully scares and FUN will return. If a movie is extreme, fantastic, let’s just make it worth seeing by adding something new if possible.
ZBF:  What are your thoughts on the zombie craze our current pop culture is consumed with?
JF:  I’m all for it if it means fresh, hmm probably not the best choice of word, good quality movies and books come out of it all. I think the trend has been steadily moving along since the Dawn of the Dead remake came out a few years back. Back then there was a saturation of below par products being released, with companies just eyeing a quick dollar, with little concern of quality. The cream rises to the top so-to-speak, even though there is still a good amount of crap coming out.
I would also say that literature has benefited more so than the world of film. Writers such as yourself and Wayne Simmons have definitely shone, and even more established writers such as David Moody have been given increased, and deserved, exposure.
ZBF:  Have you kept up with “The Walking Dead”? If so, what are your thoughts on the Zpoc finally making it to television?
JF:  I have and about bloody time. I think AMC have done a solid job with the show, although it is starting to show that they haven’t given it the budget it deserves. I’d also mention that the British mini-series Dead Set was damned good too. Well worth checking out.

ZBF:  As a horror aficionado, you must have seen a zombie movie or two. What are a few of your favorites?
JF:  Obviously older movies such as Romero’s trilogy, we won’t include any of his zombie flicks made after Day. The Living Dead at the Manchester morgue is another good one. Fulci’s movies such as The Beyond and House by the Cemetery are also wonderful. More recently I have really enjoyed [REC], [REC]2, Grace, DeadGirl and Rammbock: Berlin Undead. 28 Days/Weeks Later aren’t what I would consider zombie movies, but they are both excellent in their depiction of a zombie-like outbreak. Zombie Strippers and The German flick Night of the Living Dorks were fun too. Oh, and the Aussie short Axed was a blast!

ZBF:  What makes a good zombie story, either book or film, in your eyes?
JF:  First and foremost good characters and a solid plot. If I don’t care about the charecters I’m probably not going to care where you take the story. Guts and gore will only get you so far. It doesn’t have to be the most original plot, but as long as it is thought out well and executed with conviction it can go a long way.

ZBF:  So Zombies, Fights, or Blood?
JF:  Blood. There has to be blood my friend!

ZBF:  Where can my ZombieBloodFighters keep up with you and read some of your reviews and commentary?
JF:  Most of my work these days is done on my blog, The Lair of Filth (http://lairoffilth.blogspot.com) due to my time being limited, but I do still try and write the occasional piece for www.WildsideCinema.com and www.TheLiberalDead.com.
ZBF:  Thanks, Jude, for taking the time to visit with us.
=======================

YOU MIGHT ALSO ENJOY:
Bryan Schuessler of Shu-Izmz likes his movies filled with Bush, Boobs, and Blood!  Check out the awesome!
http://zombiebloodfights.blogspot.com/2011/06/blood-made-of-awesome-bryan-schusslers.html
You think the zpoc in the US is bad?  Try Ireland?  Author Wayne Simmons knows how bad it'll get.
http://zombiebloodfights.blogspot.com/2011/04/zombiesblood-wayne-simmons-slings-his.html
Zombies vs. TASERS!  An excerpt from "Down the Road: The Fall of Austin" by Bowie Ibarra
http://zombiebloodfights.blogspot.com/2011/08/zombiesblood-and-tasers-excerpt-from.html
++++++
Bowie Ibarra is the author of the 'Down the Road' zombie horror series from Simon and Schuester and Permuted Press.  His upcoming winter 2011 title from Twisted Library Press, entitled 'Big Cat', is about the power of friendship in a south Texas town ravaged by a bloodthirsty beast roaming the countryside.
You can network with Bowie and order his books at http://www.zombiebloodfights.com
Posted by Bowie Ibarra at 8:32 PM