ZombieBloodFights.com offers condolences to the family and friends of 'Spiro' 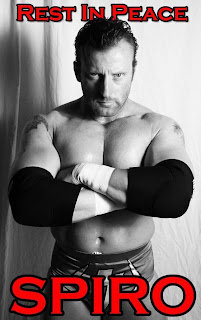 Followers of the ZBF blog are well aware of the fun I have at Texas pro-wrestling shows.  Specifically, the fun I have at Anarchy Championship Wrestling shows.
The Texas Indy scene lost one of its best wrestlers yesterday.  Cameron "Spiro" Bates passed away, and Texas lost one of its best mat technicians.
I met Spiro many years ago when I had the opportunity to announce an Austin pro-wrestling show.  I later found him wrestling for ACW, where the fans loved to hate him.  He carried himself with a professional strength that was evident to all around him.  He wrestled all around south Texas.
The man was an amazing grappler.  I'll never forget a match he had with Jaykus Plisken in San Antonio that was a scientific extravaganza.
To all the family and friends of Spiro, I offer my condolences.
To Spiro, thank you.  Thank you for reminding people of the glory of great scientific wrestling.
RIP
Posted by Bowie Ibarra at 5:35 PM