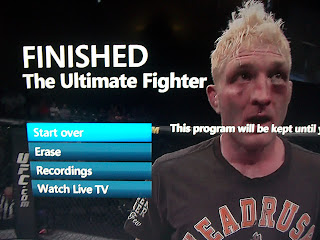 Well, Mayhem let America down.
You couldn't go on Twitter and Facebook or any site where people could rant about Season 14 of The Ultimate Fighter where people were hoping, praying, lighting candles, killing cats, what have you, to see Mayhem trash the British hooligan, Bisping.  It didn't quite work out that way.
DODSON VS. DILLISHAW:  BANTAMWEIGHT TITLE
But before we get to that, ZombieBloodFights.com salutes the athletic John Dodson in his stunning and emphatic victory over TJ Dillishaw.  The fight moved fast, as both guys were quick with their moves.  And it was that kind of speed that Dodson unleashed on Dillishaw, who had his hands down after an exchange.  Dodson knocked him down with a strike and didn't look back.  After the ref stopped the fight, he tumbled off the cage like a demented Mega Man, flying and rolling like a video game character.
BRANDAO VS. BERMUDEZ:  FEATHERWEIGHT TITLE
This fight was great, but frustrating, as Bermudez took it to Brandao early.  Bermudez showed great aggression and precision with strikes and knocked Brandao down.  He had the chance to finish, but that goddamn Brazillian fighter came back with a great technical armbar, locking Bermudez out and winning the fight.
EDWARDS VS. FERGUSON
In an undercard match, UFC vet Yves Edwards took on super douche Tony Ferguson.  Ferguson took it to Edwards in round one with some great aggression and almost knocking out the vet.  But Edwards kept it very competitive in the 2nd and 3rd, looking like he would take the fight.
But the judges gave a unanimous decision (WTF?) to Ferguson.  I imagine, as usual, when going to the judges, the takedown that Fergie scored was enough to put him over the top for the win.  I think Edwards got hosed, but that's what happens when you leave it to the judges.
GRUDGE MATCH: BISPING VS. MILLER
Mayhem Miller showed up with great enthusiasm, but garbage conditioning and a bush-league striking attack to the British brawler Bisping.  Bisping picked Mayhem apart with science, landing clean strikes compared to Miller's unorthodox strategy of just putting his head down and throwing wild strikes.
As the match wen forward, you could see Miller's gas tank running low as Bisping finished the fight with a cruel set of knees, punches, elbows, and kicks.
It was a good night of fights, and we'll see what the future holds for these stars.
=============
Bowie Ibarra is the author of the "Down the Road" zombie horror series from Simon and Schuester and Permuted Press.  His upcoming books, "Pit Fighters: Baptism by Fire" and "Pit Fighters: Double Cross" feature adventures of a fight stable in the world of combat sports.
You can network with Bowie at his website:  http://www.zombiebloodfights.com
Posted by Bowie Ibarra at 10:36 PM