FIGHTS: A (San) Uvalde for the 21st Century 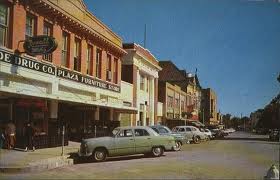 There was a time when my mother and father were not allowed in to one of the drug stores that used to be near the downtown plaza of Uvalde, Texas.  They could spend their money for an ice cream from the sidewalk, but they couldn't go inside the store.

That was then.  This is now.

Downtown Uvalde dried up when I was young, and remained that way for many years.

Today, many of the people from my generation and from the past are trying to revitalize downtown.  For me, it was all words until a recent visit.  New business, specifically a restaurant bar called "The Huddle" and a lounge called "Ultra" are bringing a little big city flash to the 'ghost of Uvalde past' that was downtown.  I have to admit, it was a bit of a shock to see this happening.

But inroads have been made by city councilmen who were from my generation, and their enthusiasm and resources have made some of them make a run downtown and do their part for the city.

I sincerely hope this growth continues.  After visiting such south Texas towns as Carrizo Springs and Crystal City, I don't want to see the skeletons of dead downtowns visit our fair city.

To my Uvalde, this hijo salutes you.  I pray that you won't let the old ways and politics interfere with the new life the other  hijos of our fair city are trying to provide with their heart, resources, and love of our town.  May it continue forward with blessings and positive vibes.

Bowie Ibarra is a proud hijo de Ugalde.  He is a published author of zombie horror from Simon and Schuester and Permuted Press.  His upcoming book, "Big Cat", is a horror story about an beast roaming the south Texas countryside near the Nueces River, and the two friends who are thrust into a hunt for the beast.

You can network with this proud hijo at his website:  http://www.zombiebloodfights.com
Posted by Bowie Ibarra at 5:58 PM