It was yet another wild night of wrestling to wrap up the year for Anarchy Championship Wrestling.  Delusions of our Childish Days started with a bang with several great opening matches featuring the stars of the organization.  As usual, it was great fun.
Before the main card began, there was a tribute to a fallen wrestler from Anarchy Championship Wrestling.  Spiro, one of ACW's biggest stars and best technical wrestlers, passed away only weeks before.  In a great show of respect, Jaykus Plyskin and Miss Maulie came to the ring and shared a few words with the respectful crowd before Spiro was given a 10-bell salute.
Then the show began.  Here are some of the highlights.
GRUDGE MATCH
KILLAH KA$H vs. SLIM SEXY
These two monsters of ACW have had bad blood brewing for a while.  The fun-loving Slim Sexy could not stand the bad attitude of Killah Ka$h.  Killah could not stand the the Sexy one.  A war of words was fought over Twitter before the big guys finally threw down.  Slim even brought soap to the ring to wash out Killah's mouth.  Ka$h didn't even make it to the ring when Sexy went on the attack.
The fans knew the power game was going to be on display, and both competitors were not ashamed to show it off.  Here's Ka$h body slamming Slim in the seats of the infamous ACW Stage SuperFans. 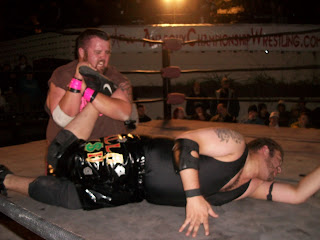 With both wrestlers evenly matched in the power game, Slim turned to a technical game, unleashing some slick science on Killah to keep him grounded. 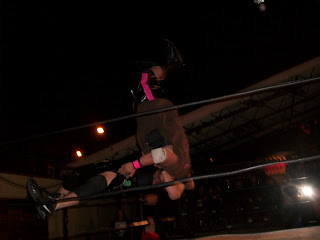 Slim wanted to take it to the skies with a dive from the top, but was stopped by Ka$h, who quickly took advantage.  In a tremendous throw, Killah Ka$h hit an amazing suplex on his foe to the delight and horror of the ACW crowd.
Ka$h took the win.
ACW FAMILY CHRISTMAS DEATHMATCH
It's not a Delusions of our Childish Days without a "Gift Wrapped Deathmatch".  Darin Childs and "The Springwood Slasher" Kris Wolfenstein threw down with the Children of Pain Sky DeLaCrimosa and Jason Silver.  DeLaCrimosa posted he was doing some 'Pain Exercises' on Twitter.  It might have came in handy as the fight began.  Here's some snaps from the fight.
Things got wild early and often as the teams threw down. 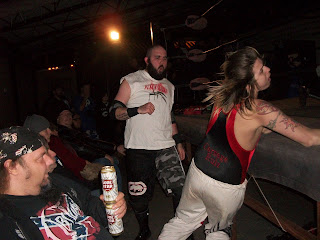 Slasher went after DeLaCrimosa, who quickly began to utilize the skills he worked on with his pain exercises. I just prayed for the safety of the man's beers.
The Springwood Slasher was kind enough to distribute forks to the fans.  Here he is asking for one of them to use on Sky. 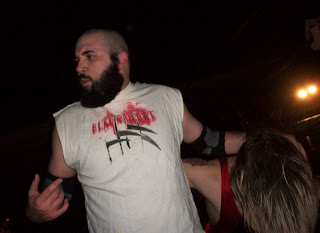 Darin Childs took advantage of an early Christmas, and took a moment to open some gifts.  That would prove bad for him. 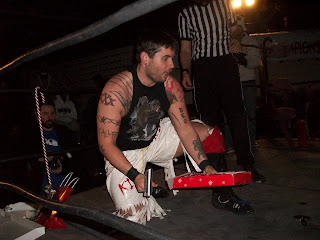 Here's a shot of Slasher and Sky outside the ring, and Childs applying direct pressure to a serious wound he suffered in the ring. 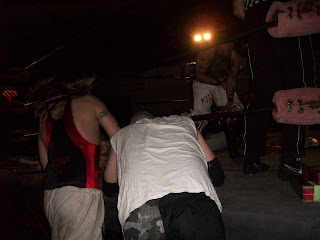 Did I mention metal spikes were also utilized? 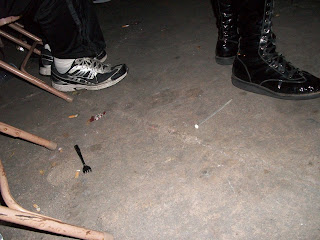 It was a wild time for the ACW SuperFans.  Here's a group pose from some of the fun bunch that showed up, doing it up ATX style. Portia Perez also competed, and she had to pull a dude's punk card for patting her on the back during a match.  When she's wrestling, Portia's like a dog eating.  You just don't bother her or risk getting your hand bit. 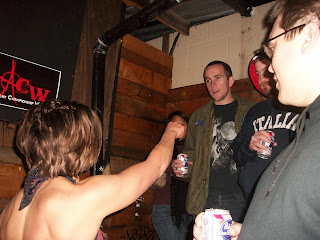 This night also saw the frightening return of one of the most devestating stables in ACW.  The Takeover returned, trashing guido Jake LaMotta. 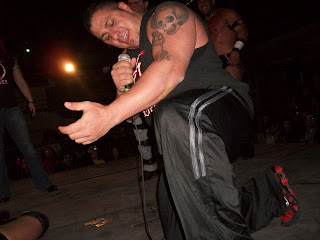 They also added a new member, Ken Carson.  There might be no free rides in ACW, but Carson just got put in a power position quick by faction leader Jaykus Plyskin. 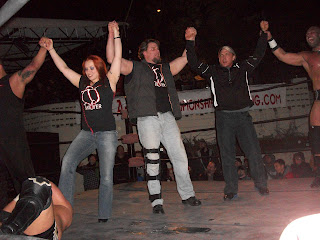 On a controversial note, during the Davey Vega and Gerald "Gary Jay" James match, Scot Summers came to the ring to get a shot at Gary.  Unfortunately, he missed Gary and crushed Vega with a spear.  Needless to say, Vega was upset.  Here's hoping those two ACW stars can sort out their differences out of the ring.
MAIN EVENT
EL GENERICO vs. ROBERT EVANS
El Generico made it to the ring with his usual energy and fanfare. 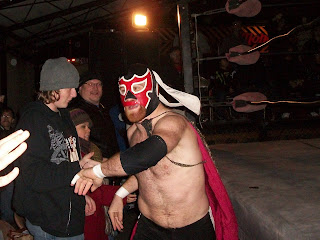 It was great to have him back in ACW. 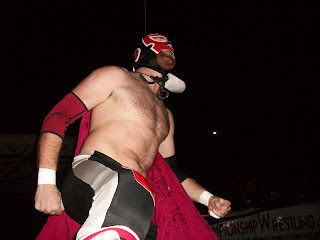 Evans tried to use his signature science to ground Generico. 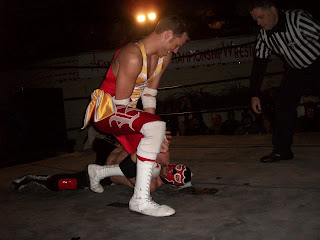 And it was a fantastic all around match.  But then someone came out to the ring seeking revenge.  And that person was Portia Perez. 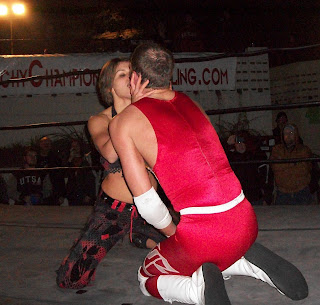 After attacking Evan's genitals, Portia vowed revenge on Evans.  Evans has cost her the Queen of Queens title, as well as another match just months before.  Now it seems Evans must face a reckoning with the wiley Canexican, Perez. 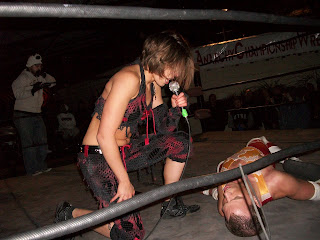 On a fun note, Slasher used a bit of pro-wrestling nostalgia by wielding a STOP sign once used by hardcore legends Madman Pondo and NecroButcher.  I would imagine it would be best to wear gloves and have sanitizer at ready when handling the sign.  The blood-bourne pathogens on that sign could destroy a small planet if allowed. 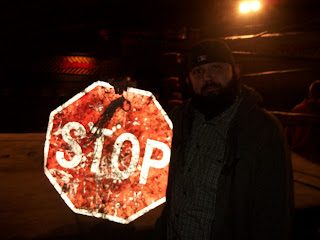 As ususal, it was another great night of wrestling.  To all the wrestlers I cheer and jeer, thank you.
==================
Bowie V. Ibarra is the author of the zombie horror series, "Down the Road" from Simon and Schuester and Permuted Press.  His most recent novel, "Big Cat", is a story of friendship in a hunt for a deadly beast.
Network with Bowie and read more about his books at ZombieBloodFights.com
Posted by Bowie Ibarra at 9:35 AM