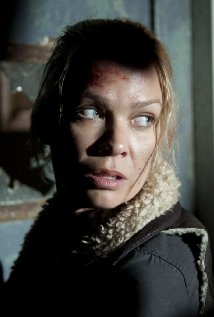 As you might expect, even in the zpoc, humans can't get along and present an united front against a common enemy.  Here's a recap from 'The Walking Dead' episode 'Prey'.

-- The show opens with Andrea has a secret meeting with Michonne in the woods.  But while that's going down, the Governor is constructing a custom torture chamber for Michonne and any and all of his foes.  He looks a liiiiiitle too turned on at the prospect.

--  Woodbury gears up for war.  It's all or nothing for the town, and Andrea realizes she's been duped again.  I don't know, maybe they should consider the benefits of the 'nothing' option.

--  Milton talks with the Governor about the offensive, but discovers the torture chamber.  Awkward.

--  Milton leaks info about the torture chamber to Andrea and then shows it to her.  Then the governor shows up to test audio recording equipment.  Kinky.
-- Milton and Andrea explore the assassination option.  Hey Andrea, too little too late.  You could have killed him after banging him out a few nights before.  Do you get it now?
--  Milton says killing the Governor would only put Martinez in charge.  Things would go from bad to worse in Woodbury with the death squad leader at the helm.  It's a 'Day of the Dead' situation.  You remember when Major Cooper died and Sgt. Rhodes took over the underground base?

--  Andrea tries to make a run to warn the prison, but gets disarmed by Martinez and propositioned by the Governor.  Best thing you could do, Andrea, is stick with the team for the attack and off the governor before the battle even begins.  You wanted to shoot him just moments before.  Keep your friends close, and enemies closer, you know?

--  Tyrese and Sascha are on the wall on the watch and let Andrea run for the prison.  They're not cold enough to shoot her.   They then have to answer to the Governor on why they let her go.  Governor figures out Milton leaked info to her.

--  Tyrese confronts his other two friends, who are firmly behind the Governor.

--  Governor tracks Andrea, and the hunt is on.  She runs into a building to escape the Governor.  After some cat-and-mouse and squashing a zeds face via some Greg Nicotero magic, Andrea makes a break for it and the Governor is confronted by zeds.

-- The pit that Woodbury gathered zombies for the ZombieBloodFights.com Games at the Woodbury Arena of Sport and other such experiments is set ablaze by a mysterious figure.

-- Andrea is yards away from the prison.  She's so close she can see Rick on the tower.  She can't cry out or the zeds would be on her, so she just waves.  But the Governor catches her and takes her back.  He tells the people at the gate he didn't find her.  He also discovers the sabotage and knows who did it.  Milton has a very bad poker face.

--  Show ends with Andrea strapped to the Governor's custom chair as the first contestant to initiate the Re-education Room.  You know, work out the kinks.  See what works and doesn't work.  You know, general torture to the death trial and error stuff.

You can network with Bowie and read about his Tex-Mexploitation stories and check out his book trailers at his personal website, ZombieBloodFights.com.
Posted by Bowie Ibarra at 2:00 PM