River City Wrestling has been a constant provider of pro-wrestling action for over ten years now.  As the Texas wrestling revival grows in strength, RCW has always been around, and is benefiting from the attention Texas wrestling is currently receiving.

On this night, it was the presence of TNA SuperStars at the event, joining with the already talented roster of the organization, that made the event wild and fun.  Here are some notes from another fun, yet out of control, event.

-- It was good to see Dingo Wallaby back from neck surgery.  We'll see soon if he chooses to compete again.  He did a good job announcing in spite of a poor sound system in the Aztec Soccer Arena. 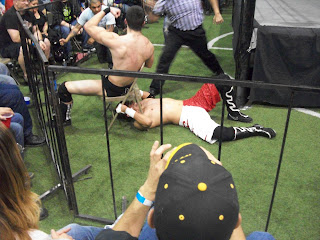 --  Straight Edge Dude entered to a unique pick of a song:  Justin Beiber's 'Baby'.  Hmmmm....
--  Low Rider would power up in the ring by pantomiming taking a hit from a jay.  Now, wait a second.  This has become interesting, because 'straight edge' dudes are supposed to kick the asses of anyone doing drugs or drinking beer.
--  Straight Edge Dude wins, but then jumps the rail to get in the face of a fan.  It was a sign that things were going to get wild. 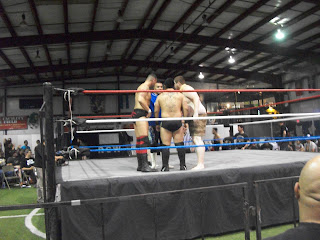 --  A big six man match followed up the opening match, featuring the reunion of Dingo Wallaby with Honky Kong.

-- Ryan Oshun was a part of the team, too, and seemed to relish being with the good guys.

--  A third talent joined, too, who was said to be one of the students of the RCW school of wrestling.

-- The sleazy Joey Spector was a part of the heel faction, and man he looked like he put on some weight for the winter.  He was just as sleazy and gross as I remember him, and it was good to see him in action again.  He teamed with 'Twix' Rob Love and Jerimiah Jones. 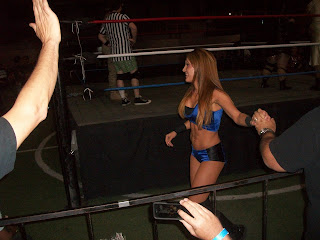 --  Alissa Flash returned to RCW looking for answers as to why she was stripped of the RCW International Title.  Instead, she was greeted by the mammoth Kyra Mya and the Samoan Islander from Norman, Oklahoma, Michael Faith.  Its then that Sicodelico, Jr., joined Alissa at ringside.  The ringside partners were soon ejected, however, and things got out of hand.

--  Alissa took it to Kyra, who couldn't seem to get things going.  Alissa smashed Kyra with trash cans outside the ring, turning the match hardcore and taking out her aggression on being stripped of the International Title on the massive Mya.

-- Back in the ring, a masked 'large luchador' made it to the ring and trashed Alissa with a swirling slam, giving the win to Mya.  Thanks a lot, ref. 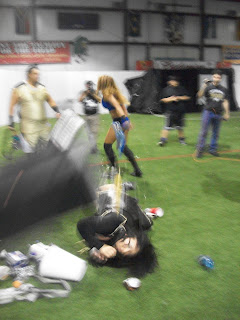 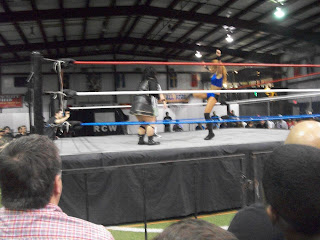 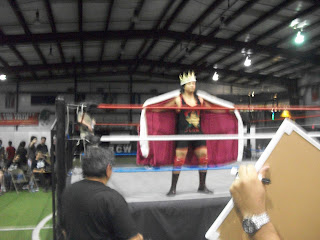 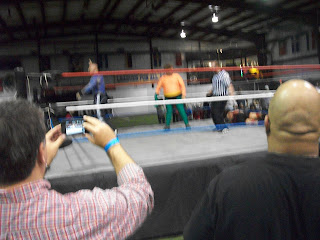 --  Hernandez shows up jacked as usual in sweat pants and street shoes.  But he did paint his body blue with the superman logo emblazed across his chest.

-- Hernandez let a local fan dressed as Aquaman enter the fray and beat up on Juan.  Good old RCW-style fun.

--  After faking an injury, Don Juan jumped Hernandez and messed him up.  When he took the mike, he said how great he was.  That's when Rob Terry entered the ring to everyone's surprise and jacked up Don Juan with a power move. Then Joey Ryan came in and joined in on the RCW wackiness. 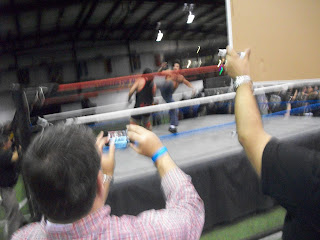 That's when things got completely out of hand with the arrival of Aces and 8s. 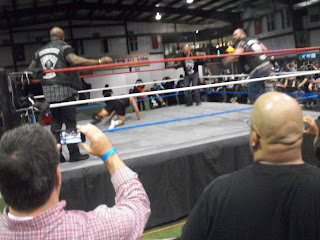 Okay, three bad dudes on one bad guy.  People cheering.  TNAs in town.  I get it.  Get in some moves, lets have some fun.
Fans are overjoyed, now calling for the table.  Okay, well, still three bad guys.  Still just Don Juan, this is a little much, but okay.
Then the Aces and 8 hammer comes out, and now things are a little out of hand.  Are we really going to cheer for Aces and 8 to mutilate Don Juan's genitals with a hammer blow?  Is this Looney Tunes?  No, that's a real dude in there, and though this is still clearly theatre, the bloodlust that came over this crowd kind of chilled me.
Look, its one thing if a dude signs up for a hardcore match.  I get it.  Whatever happens to him he had coming.  You signed up to wrestle Masada, Onita, Cactus Jack, whatever.  You signed up for it, you deserve the brutality of whatever weapon gets used in there, and I'll watch it.
Don Juan might have deserved to get punked out by some of TNAs big stars, but he didn't sign up to have his eggs scrambled.
Time to go to the concession stand while these crazy bikers celebrate cracking a dudes nuts open in front of the now rabid RCW fans.
THE WAR OF ATTRITION AT THE CONCESSION STAND
This concession stand was the worst concession stand I have ever had a chance to wait in line for at an indy wrestling event.  Two people with their heads up their asses looking at the crowd like they never saw or expected this kind of crowd.  What is wrong with this place?  How do you not have people, at least four people, ready to go for the large crowd they had to have seen last month.
Then, one of the concession stand people bailed on the stand and left one poor high school sophomore with no gloves on to grab chips from the bag to put cold cheese on and put in a microwave(!!) because they were not ready with cheese in crock pot?
Boo this stand.  I'll just have a beer instead of a Frito-Pie.  20 minutes to get one beer.  Fix that, Aztec Soccer stadium. 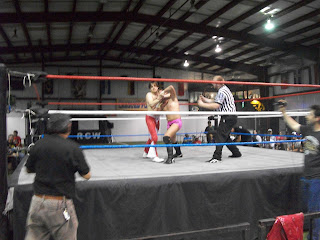 RCW PHOENIX TITLE MATCH
"Most Interesting Wrestler in the World" Mitch Baxter vs. 'Centerfold' Matt Palmer
-- A great matchup.  It was cool to see Centerfold branch out in to other territories, and I think he did a great job against newbie Baxter.  The fans really liked him and I think were prompted by the section I was in.  Baxter takes the win with a cheating roll up.
--  I had fun telling Mitch Baxter's mom was a slut, because, well, she does bang out guys for money on film when she's not managing her son to wrestling victory.  Don't ask me how I know that, however. 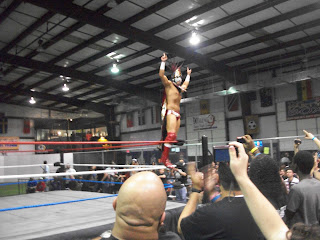 RCW TITLE MATCH
'The Samoan Oklahoman' Michael Faith vs. Sicodelico, Jr.
--  Sicodelico, Jr., arrives at the ring in full Aztec Warrior themed regalia.
-- FAith arrived to the ring with Mya in tow for the match and put on mask to mock Sicodelico, who didn't take kindly to it.
--  The fight spills outside the ring and gets crazy!  Here are some snaps. 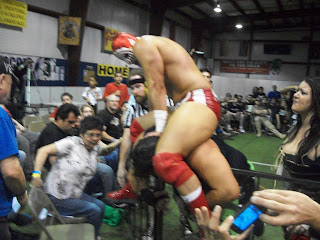 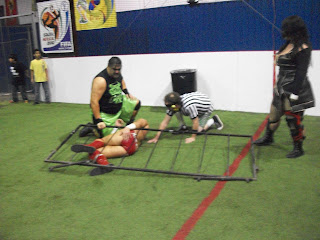 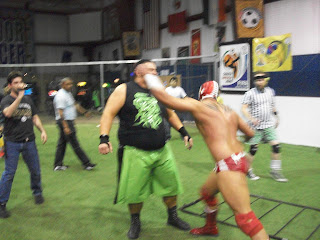 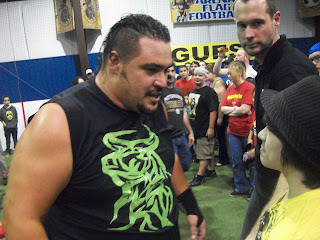 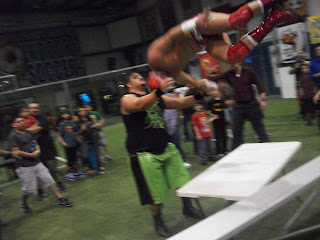 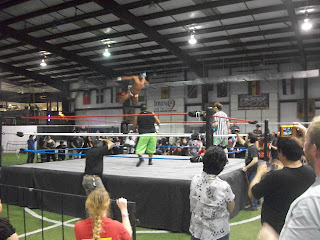 --- It was basically two on one in the match, and Sico lost to the Samoan Oklahoman.
All in all, I still had a good time.  RCW always delivers, and though I couldn't get behind the genital mutilation with the other fans, I still had fun.  That's why I pay my $10 to go to the shows.  RCW always delivers a good time.
Thank you for taking the time to read the blog.  If you liked it, show some support for ZombieBloodFights.com by picking up the combat sport themed book 'Pit Fighters: Baptism by Fire', a great story featuring a Mexican luchador who crosses over into MMA.  Available for .99 cents for Kindle and $7.99 paperback.  Get it today.
=============
BOWIE V. IBARRA is the author of the 'Down the Road' zombie horror series from Permuted Press and Simon and Schuester.  His combat sports themed book, PIT FIGHTERS: BAPTISM BY FIRE, features a luchador from Mexico who transitions to mixed martial arts competition.  It is available in paperback and on Kindle for .99 cents.
Enjoy the blog?  Share it with your friends using the 'Facebook', 'Blogger' and 'Twitter' buttons below.
Follow ZombieBloodFights.com on Twitter (@wingback20)

You can network with Bowie and explore his other titles at his personal website, ZombieBloodFights.com.
﻿
Posted by Bowie Ibarra at 9:45 AM