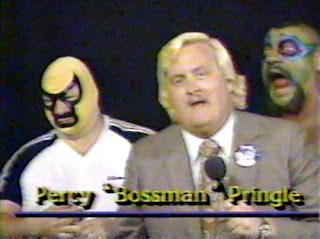 I always thought he was obnoxious.

God, what an obnoxious name, too.  Percival "Percy" Pringle.  He was outspoken, had an obnoxious southern Alabama voice (he was born in Mobile), had that gross double chin, wore shitty suits, and just made you want to slug him.

But that's what made him great.  He was a bad guy manager managing the bad guys.  You're not supposed to like him.


And then when he became the manager of the dude who was to become one of the greatest wrestlers of all time, The Undertaker, under the mantle of Paul Bearer, he was even more annoying.  That stupid voice, the obnoxious laugh, and that double chin.  So gross.
But, man, was he good at it.
That's why when Jake 'The Snake' Robert's DDT'd Paul Bearer on the Funeral Parlor, it became one of the most rewound moments in my recorded VHS WWF video collection.  (at 4:35 mark)
My buddy from college, Polo, used to do his voice, and it was always just as ridiculous as Bearers.  I remember one time he used the voice and was making fun of this one hard-ass in class. It was one of the most hilarious things I had ever seen, especially afterward when Polo said, "He's scared of Paul Bearer's voice."
I remember another funny moment at a house show when one of my friends spit on Paul Bearer as he walked to the ring with 'taker in the middle of the Frank Erwin Center.  I laughed so hard at the loogee that I could see on Paul's coat as he walked down.  I'm laughing as I'm writing this.
And, yet again, the emotion that Paul Bearer evoked was so intense and so true.  Man, I'd never seen my friend so angry and hateful as he was to Paul Bearer.
Just last week, I called up my buddy Polo and left a message using the Paul Bearer voice.  I even used it on a message for my friend, Ana.  Little did I know she had met him just last year at WrestleMania in Miami.
My buddy Polo called me back and used the voice again, and I laughed.
Thanks for all you did for pro-wrestling, Percy Pringle.
RIP
Posted by Bowie Ibarra at 9:48 PM