One of the biggest events in independent wrestling history is going down April 20th in Houston, Texas.  The first of what I am hoping is an annual event, The NWA Houston Parade of Champions 2013 is going down with the biggest NWA pro-wrestling card in years.

ZombieBloodFights.com is pleased to present a preview of the great event that is poised to be a springboard for the future of the NWA.  Check it out. 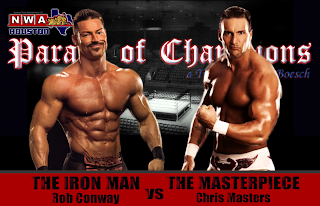 "Ironman" Rob Conway made it out of Japan with a win and the NWA World Title.  Now, he puts it up against his first domestic US opponent.

What was once an undercard matchup has now become a world title bout.  Conway was able to wrestle the title away from Kahagas only a day after Kahagas defended the belt in Houston against Texas standout, Ray Rowe.  Originally assigned to fight Jax Dane at a sanctioned NWA-Branded Outlaw Wrestling event, Dane had to drop his chance after being jumped by The Kingz of the Underground.  Conway was brought in as a last-minute replacement.

The fact remains that these two dudes are seasoned professionals and they are going to mix it up in one of the undercard matches.  Conway has been a presence on the San Antonio indy scene in NWA-BOW, and Masters has had a run across the world on the independent scene.  It will be a great matchup. 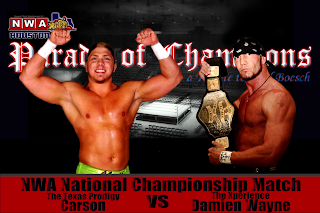 'The Texas Prodigy' Houston Carson has only been around for a few years, but his talent and skill level has propelled him to great heights early.  Already a former NWA North American Champ, he's lined up to take on one of the east coasts best wrestlers.

Damien Wayne was a pinfall away from being crowned the NWA World Heavyweight Champ in a 8 man elimination tournament when Dontay Brown called the shady NWA President Bruce Tharpe, who allowed TokyoMonster Kahagas to be entered in the final at the last minute.

Since that debacle, he has earned the NWA National Championship title and has confirmed his legitimacy as a contender on the national scene.  Wayne thinks Carson is a 'pretty boy', and is ready to challenge the young Texan.  This matchup looks to be fantastic. 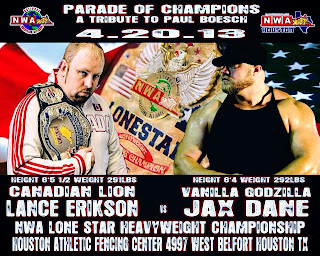 NWA Lone Star Heavyweight Champion 'Vanilla Godzilla' Jax Dane has been stomping competition across Texas for several years now.  A seasoned veteran, Dane has held titles across Texas and has faced some of the stiffest competition in the Lone Star State.  His power game in the ring is hard to overcome when opponents can't hold the ferocity off early.

But challenger 'The Canadian Lion' Lance Erickson believes he can match Dane's power game and up the ante on brutality.  Erickson was one of the people the NWA tapped to participate in the NWA World Heavyweight Title tournament as well, but didn't make it to the final.

Both wrestlers have been chomping at the bit to get at each other on the 20th, with lots of posturing and challenges via their Facebook profiles that are adding fuel to the fire.  This matchup looks to be competitive.

The rumors are true.  NWA North American Champ, 'Addictive and Expensive' Byron Wilcott, has talked his way into a title match with former NWA Heavyweight Champ 'TokyoMonster' Kahagas.  But now, Wilcott is the only one with something big to lose going into this match after Kahagas lost the belt.

In spite of his shady start, Kahagas has proven to be a fighting champion, taking title defenses in NWA territories all across the US and even outside its borders, as per a quality NWA champ.  Up until he lost the belt to Conway, no one has been able to beat him yet.  Could his matchup the previous night with Rowe have taken some fight out of the champ?

Byron Wilcott might be arrogant, but he can back it up with skill, strength, and talent.  Since picking up the North American Title, his cocky attitude has turned up to 11 because now he's called for this match to be a unification match.

With the swiftness this challenge was accepted by the NWA championship committee, Wilcott needs to be careful when wrestling Kahagas, especially if Tharpe is the TokyoMonster's ace in the hole.  Take some time out of your wild lifestyle and read that contract, Wilcott. 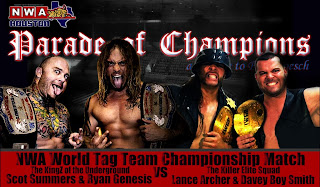 If the previous booked matches did not pique your fancy, then there's no way this scheduled battle of titans can be ignored.  The current NWA World Tag Team Champions 'Kings of the Underground' Scot Summers and Ryan Genesis will be taking on the current New Japan Pro-Wrestling Tag Team Champs, 'The Killer Elite Squad' Lance Hoyt and DH Smith in a history-making inter-promotional match.

'Showtime' Scot Summers has been the foundation in which the revival of Texas independent wrestling was built on.  Both wrestling promotions and wrestlers have built their following and reputation off his back over the past few years.  He's wrestled greats like Bryan Danielson/Daniel Bryan, Nigel McGuinness, Claudio Castagnoli/Antonio Cesaro, Jimmy Jacobs, Chris Hero, and Jerry Lynn among others, and has been a springboard and mentor to fresh faces like ACH, who is taking the national scene by storm.  The guy might be batshit crazy, but he has the talent and skill to mix it up and win in any style, science or hardcore.

Combining this madman with another wild wrestler, Ryan Genesis, has been wrestling gold for this duo.  Genesis not only has amazing skills on the ground, but hand skills that are second to none in the wrestling business.  Genesis is a legit boxer that brings a serious striking aspect to his game in the ring.  Mixing it up with strikes with Genesis is a formula for disaster, and it has served the duo well.

And that's what makes this matchup with KES so titanic, because Hoyt and Smith are just as dangerous.

Lance Hoyt has been on the Texas indy scene for years and has seen its ups and downs.  Working across the state and country, he made waves in San Antonio and Dallas.  He was even called up to WWE for a run as well.  Its been in Japan with Hoyt that he's been able to excel.  With amazing size, agility, and speed for a big guy, he is one of the remaining wrestlers on the scene that has training by Shawn Micheals.

DH Smith is part of the sacred Hart Dungeon bloodline.  The guy has been around wrestling for all of his life.  With Davey Boy Smith's blood running through his veins, this run with the NJPW tag titles is only the beginning of a line of titles for the descendent of the British Bulldog.

This matchup, as well as the entire card, is not to be missed.  Titles might change hands by then.  But you can be assured of great matchups anyway.

Get your tickets today for this outstanding card and see why the revived NWA is turning heads and making waves on the indy scene.

Check out the TV spots:

-----------
BOWIE V. IBARRA is the author of the 'Down the Road' zombie horror series from Permuted Press and Simon and Schuester.  His combat sports themed book, PIT FIGHTERS: BAPTISM BY FIRE, features a luchador from Mexico who transitions to mixed martial arts competition.  It is available in paperback and on Kindle for .99 cents.