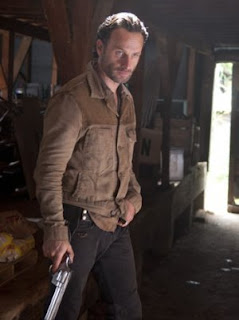 ﻿Tensions were high in 'Arrow in the Doorpost'.  Here are some notes from ZombieBloodFights.com.
GOVERNOR AND RICK FACE-OFF
--  Rick, Daryl, and Herschel are part of a convoy to meet the Governor.
-- Great opening shot overhead of the silos where the Prison/Woodbury Peace Summit would take place.  Great shots throughout, creating great, bordering on arthouse-style pictures throughout.
--  Rick finds the shed where the Governor is waiting to broker a deal.  Rick puts his piece away, but the Governor has an ace in the hole taped to the side of the table.
--  Andrea shows up with Milton and Marquez.  She claims to have negotiated the peace talks.  She is quickly dismissed by the Governor, showing no respect to Andrea.
--  Rick suggests boundaries for co-existence, Governor doesn't want any of it.
--  Governor says he'll lay off if Rick sells out Michone.  He gives him two days to decide.
MARQUEZ AND DARYL, HERSCHEL AND MILTON
--  The muscle of both teams, Marquez and Daryl, flex their muscles putting down zeds.  Both know they're going to throw down eventually in spite of the diplomatic theatrics from their leaders.  But they respect their leaders enough to stay on their leashes.
--  Herschel and Milton have a moment together and bond over Herschel's cut off leg.
--  Herschel subtly reveals to Andrea the threat of rape the Governor posed to Maggie.  He also says she is still welcome with the prison crew.
PRISON GEARS UP
--  With all the weapons brought from Morgan and throughout their adventures, the team gears up.
--  Merle thinks they should jump the Governor at the meeting site, its the best opportunity to finish it.  Glenn shoots down the idea.
--  Merle takes the initiative and tries to gear up and make a run on the Governor, but Glenn stops him with physical force.
--  Merle tries to recruit Michone to go jump the Governor, but she turns him down, too.
RICK AND THE GOVERNOR'S RETURN
--  Rick weighs the options of selling out Michone by asking Herschel's thoughts.  Herschel says Michone has earned her place and is a big part of why their still alive and Glen and Maggie are safe.
-- The Governor says whether Rick brings in Michone or not, they're going on the offensive to crush the prison folks.
It's a great episode and lead up to next week.  We'll see how it plays out.  Join us later this week for the next 'Wild Speculation' as well.
If you enjoyed the blog, please consider offering support by purchasing one of the ZombieBloodFights.com titles from Permuted Press and Simon and Schuster in paperback and kindle here.
============
BOWIE IBARRA is the author of the 'Down the Road' zombie horror series from Permuted Press and Simon and Schuster.  His latest zombie story, The Fall of Austin, tells the story of military, police, convicts, and citizens of the Texas capitol as they deal with the zpoc.  It is available in Kindle and Paperback.

You can network with Bowie and read about his Tex-Mexploitation stories and check out his book trailers at his personal website, ZombieBloodFights.com.
Posted by Bowie Ibarra at 11:16 AM