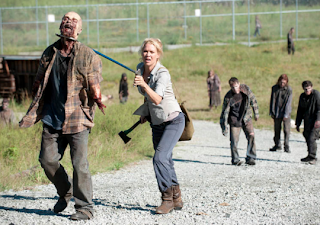 My, my, my, how I love Merle even more each episode. I though last night’s episode really showed how he was a valuable part of the group. Leading the pack when Andrea showed up. Love it.
Like many of you, I saw the sneak peek where the survivor chases the car, screaming for Rick to stop, but they don’t, that pissed me off. I mean, seriously, The prison group thinks only of their immediate survival and doesn’t think about the future. They should. They have three young people in their group.. Their future thoughts are with food for tomorrow instead of a world for Carl, Judith and Beth.

Onward to my speculation. I am basing this on the three TV previews I saw. This will be an episode where we only see, Rick, Michonne, and Carl. Aside from the running man on the road and the guy on the roof, they lead you to believe it is Woodbury, but it isn’t. I’m gonna say the guy on the roof is Morgan (From season 1 Episode 1), we know this from the comics. This is one of those episodes (IMO) that do not advance the storyline. Only character development for next season. Nothing pivotal will happen. Just some good visual PA stuff and twisted sickness (Like piles of burnt bodies). And while I am at it, can someone tell me why now Walker Blood is suddenly bright red? Even when they are severely decomposed? Why is blood so fresh? Grr.


MICHAEL S. GARDNER, horror writer and blogger from Virginia. His short story collection, Death in the Times of Madness, is currently available on Amazon for cheaper than a candy bar. You can check out his reviews and interviews at: www.atasteofterror.blogspot.com

My predictions for next week’s episode are as follows:

1.  We finally have Merle (re)integrating with his former survivor pals and newcomers alike. The tension is, of course, obvious. This, to me, means must-see television. We all know Merle is a racist prick, but we’ve finally seen some of the caring side (like that was possible, right?) when Daryl took off his shirt and revealed the scars from his abuse as a child – note the tattoo shifting sides. Near the end of the episode, we see him trying to bury the hatchet with Michonne. Yeah, yeah, this could just be another ploy to stir the pot, but I’d like to see less of this stereotypical backwoods bigot archetype. And this is my first prediction: In next week’s episode, we’ll start to see Merle’s character develop. Hell, who knows? Maybe he and Michonne might find out that their not so different after all? Possible love interest, maybe? Either that or he gets offed.

2.  We’ve finally seen Carl growing into the man he’s going to be (barring he doesn’t get shot on accident again – or on purpose). He made a good judgment call on the previous episode in pointing out Rick wasn’t fit for the Ricktatorship due to obvious stuff and things. Next week I think we’ll see him taking up more responsibility, possibly even starting or stopping a major conflict with the Governor.

3.  I do believe it is time for Daryl to get him some. Sorry, ladies, but I’m going with Carol for this one. (My girlfriend’s probably gonna punch me when she reads this!)

4.  Fourth, but FAR from final, I think we’ll see more horrible shots on the stationary living and more crack shots on the ambling dead. Seriously, WTF is up with that?

5.  This should have been my first prediction: Andrea will FINALLY die. And if it’s not on the next episode, count this prediction as “active” until someone just says screw it and puts one in her forehead. Every time I see her lately, I can only think of Peter Griffin saying: “Shut up, Meg.” I get that they’re trying to show her as the strong female lead - and the series needs one – but not her. Andrea just seems like she’s unable to what has to be done – note how she couldn’t kill the Governor, which will probably come back and bite her in the rear next episode or soon after. She should have just stayed at the CDC. I’d rather have Lori at this point (not in the form of a ghost, mind you).

GARETH WOOD, author of the 'Rise' series from Permuted Press

Wild Speculations on The Walking Dead! Well, kids, we've had a wild ride
this season so far. I think it's only about to get worse for Our Heroes.
My top 5 predictions, in no particular order, for the next episode:

1- Merle will misbehave, and Daryl will have to set him right.

2- Rick, with something to focus on other than the ghost of his dead wife, will make threats and state boldly that something "will not happen..."

3- Andrea will continue to be the most clueless character ever, in the history of everything. I mean really, the writers have done such a dis-service to a fine actress, giving her such terrible material to work with.

4- Michonne will kill something, and then snarl or be surly. Her default expression of mistrust and bat-shit-crazy will me replaced with one of confusion. Here is another character that the writers appear to have not one clue how to write properly.

5- There will be zombies. They will eat someone. Possibly a minor
character like Herschel's Other Daughter Who Is Not Maggie.

For one, Tyrese might be ready to throw in with Woodbury, but he is going to see something or experience something that's going to change his mind about the place.  More idealistic than Andrea and is going to see Woodbury for what it is.  It might be at the cost of that female.

Merle will carve out a niche for himself in the group and make himself indispensable.  He knows he's the first on the Governor's list, so he knows what side his bread is buttered on.

Andrea is also clearly going to regret not cashing the Governor out when she had the chance.  More people will die because of her inaction.

From the teasers, it seems like Rick's going to make that run with Carl and friends, but it's not going to play out like he'd hoped.  He'll be captive in Woodbury, forcing the hand of the WD Crew in the prison.

That's it for this week!

If you enjoy this blog, The Walking Dead, or zombie smashing in general, please give the Down the Road zombie horror series a go.  Great action, great horror, and a great storyline.  Help support this blog by pitching in a few bucks to buy a book or two.

You can network with Bowie and read about his Tex-Mexploitation stories and check out his book trailers at his personal website, ZombieBloodFights.com.
Posted by Bowie Ibarra at 5:45 AM