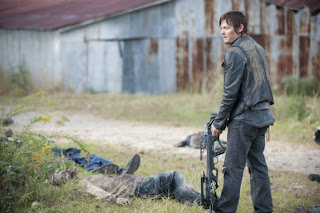 'This Sorrowful Life' wasn't as explosive as anticipated.  But it did provide yet another sad turn of events for one of the TV show's most interesting characters.  Here's how things went down.

==  Rick is getting his inner circle (Herschel, Glenn, and Daryl) up to date on the move to sell out Michonne to the Governor.  Rick then approaches Merle, who says Rick doesn't have the guts to do it.

==  Sure enough, Rick second-guesses himself and calls the move off.  But Merle has taken matters into his own hands and made the move himself.  When the group finds out, Daryl goes out to find him on his own.

==  After finding a car to make the trip faster, Michone talks sense to Merle and changes his point of view.  He lets her go.

==  With nowhere to go anymore, he plays the only move he has left.  He gets shitfaced drunk listening to Motorhead's 'Fast and Loose', and sets up a one-man ambush of the Governor and his death squad at the rendezvous point.  He finds a position to start picking off the death squad as they get tied up with zombies that Merle let loose into the area.  He's only moments away from picking off the Governor when his position is discovered and he is brutally beaten before the Governor shoots him.

==  Daryl finds Michone, and though he thinks she killed Merle at first, she tells him what he did.  Daryl finds the rendezvous point and the victims of the ambush.  One of them happens to feasting on Ben, who was shot in the massacre.  Daryl discovers its his brother and puts him down by stabbing him in the head multiple times.  We then have to watch our hero deal with this tragic loss.

Next week, 'Welcome to the Tombs' debuts, the finale of Season 3.  I can already imagine what that episode is implying.

You can network with Bowie and read about his Tex-Mexploitation stories and check out his book trailers at his personal website, ZombieBloodFights.com.
Posted by Bowie Ibarra at 1:37 PM