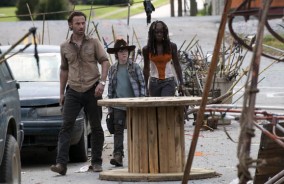 The follow-up to 'The Walking Dead-Clear' episode should be interesting.  Here are some thoughts from some noted Zombie Enthusiasts.


First off, I have a really healthy love/hate relationship with The Walking Dead. Some episodes all I want to do is reach through the screen and slap a stupid character, other times, I'm simply in love with said same character. Much of this has to do with the various writers of the show. The writers have done some really stupid stuff over the past three seasons, then again, the writers have managed to pull off some of the best stuff I've ever seen in a TV show. Basically, I long for the show to somehow find consistency. One can hope, right? Still, in the end, I'll still be hooked on this show, warts and all, and most episodes it is the best show on TV.


For this week's episode, Arrow on the Doorpost -


1) I predict Andrea is going to play a pretty significant part in setting up The Governor and Rick's meeting, and , and she'll pay dearly for it, caught in the middle and torn between her feelings for both The Governor and Rick, if not in this episode, certainly by the end of the season. I don't feel her chances of surviving past the finale are very high, and Michonne will have a hand in Andrea's demise.


2) The Governor is certainly laying a trap for Rick and his crew. I predict during the peace treaty talks, others from Woodbury, on orders from the Governor, will attack the prison, while Rick is distracted.


3) Merle will prove to be a wild card. At this point, he could go either way. Both Rick and The Governor have tried to kill him, so he's really not loyal to either at this point in the series. Merle is smart and a survivor, he'll certainly weigh his options and go with the group that's more likely to survive. I could see Merle taking over Woodbury and becoming the "new" Governor.


4) We're going to lose more characters, it's inevitable. I predict either Maggie or her sister are going to die. It'd really do a number on Glen if it's Maggie, and if it's Maggie's sister, the baby will be in even more danger.


5) This may be the episode where the set for the finale is very much in motion. The prison is no longer safe and it's time to move on. Rick's kicking Tyrone and his group out will come back to bite him. I really feel the hitchhiker from the previous episode is going to play into something as well.

JACKIE DRUGA, author of the Permuted Press title The Flu

Episode 12 gave us very little but character development of Michonne and a nice treat into Morgan.
So my speculation, based on previews and items picked up in the episode clear. They meet up with the governor. But I think Rick goes into the meeting thinking they are gonna talk and while Hershel is outside, he gets kidnapped. Starting the war.

Back at prison, Merle becomes more part of the group and they plot the assassination of the governer.
In Woodbury, Tyrese trains to be a solider there but learns quickly about the governor’s evil ways and hence becomes a spy. I think Tyrese sees Herschel.

Michonne really came out of her ‘anti’ shell and I liked what we saw. I don’t know if it’s me but I felt a connection between her and Rick. If anyone is gonna bring him out of his padded cell world, it’s her.

I’m gonna lean toward thinking there was something in the orange backpack they picked up. The writers can’t be so daft to think that we, the viewers would buy a man, who had survived a year in a Zombie Apocalypse, would scream and run down the road. He knows better. You gonna tell me he survived all that time to die being stupid. No. So I’m hopeful that the twit factor didn’t play into the writers and the running survivor means something other than a bad way to show Rick lost all humanity and how much he has changed.

There's got to be a showdown between Rick and the Governor.

Both sides feel each other out.  Prison needs to upgrade security.

Woodbury shouldn't storm the prison, but he's probably going to because of his hubris.  If they have 35 some-odd people at Woodbury, and 20 folks go on this offensive, what happens?  Some of them are going to die, many will be wounded.  Not only will they have to deal with the defenses and the prison itself, but the zombies outside.  As people start dying and getting wounded, the wounded start expending resources.

And even if they made it into the prison, they don't know where they're going, they're still dealing with zeds, and all the people in the prison have to do is lock the cell blocks and hold their positions.

And the Governor would have to maintain morale, which is hanging by a thread a the moment.  If the Governor were leaving people out on the battlefield without help, attitudes would definitely change toward the Governor's regime.  It would change the attitude of Tyrese, too, who might be the deciding factor in the assault.

If the Governor is going on the offensive, he'd be better off doing some sort of stealth attack with his death squad, infiltrating under the cover of darkness.

And Morgan's story about putting down his zombie wife and how she infected his son is finally setting up Zombie Lori.  Zombie Lori will have Carl in a vulnerable position, Carl won't be able to act, and Rick will put her down.  Rick learned from Morgan's story.


I speculate that...
A. Rick makes some sort of deal with the governor that will put the group at odds and make everyone further question his judgement.

B. He and Michonne will plan a prison courtyard picnic with their dead loved ones.

C. The governor will find an abandoned Best Buy and suddenly will be as populated with iPad 3s as Atlanta is with 2013 cars in "2010".
;)
Suddenly Woodbury will be as populated with iPads.
======
If you need a little more zombie horror in your life, I hope you will consider checking out my zombie horror series, Down the Road, from Permuted Press.  The books are available in Kindle and paperback at great prices, so check them out here.

You can network with Bowie and read about his Tex-Mexploitation stories and check out his book trailers at his personal website, ZombieBloodFights.com.