MUSIC TO SMASH THE LIVING DEAD TO 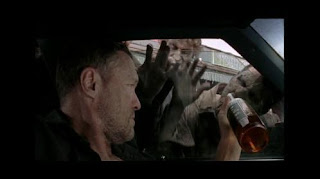 Merle Dixon, one of the most despicable, yet interesting, characters on 'The Walking Dead', met his fate making a final futile push against the leader of Woodbury, Philip the Governor.  One of the most fascinating choices he made as he girded his loins to go on his veritable suicide mission was to look for drugs and ask for liquor at the prison.  As he moved closer to his destiny, he apparently found a bottle of whiskey and jammed out to Motorhead's 'Fast and Loose' in a car as he got shitfaced and lined up zeds for his suicide attack on the governor at the rendezvous point.

Or maybe they were just Motorhead fans?

At any rate, as much as the song was a theatrical convention that was relevant to describing the character, it was also a great choice to go on an all-out assault of the enemy during the zombie apocalypse.

With that said, let's take a look at some musical pieces The Walking Dead has used, and music outside of the movie themes that have laced the background of many of our favorite zpoc movies and books.

Well, books from ZombieBloodFights.com, that is.

The Governor apparently had a thing for the music of Frederick Chopin, because his music was played several times this season.  When Andrea returned to the Governor in this episode, the Governor was listening to Chopin's Raindrop Prelude.

In this same episode, Tom Wait's Hold On was also featured as well.

'THE WALKING DEAD' - Say the Word

Chopin made his music felt in this episode, where he used Chopin's 'Etude No. 3 in E', known popularly as 'Tristesse' to soothe his daughter as well as the guy that gave up his body to science to see if they could be saved.

DAWN OF THE DEAD '04 - When the Man Comes Around

Johnny Cash was a little played out after his death, but his song 'When the Man Comes Around' and the imagery behind it really set the tone for this re-envisioning of the classic Romero hit.  And who can forget the silly 'Down with the Sickness' interpretation by Richard Cheese?  Of course, the movie finished with the hard version by Disturbed.

One of the many haunting moments of the movie '28 Day Later' was when the survivors were traveling on the major highway out of London in a Taxi, this song played in the background.  We were greeted with images of a smoldering London and an even bleaker future for the survivors.

When the dead rose from the dead to attack the living, the skeletal face that opened its eyes and smiled started this song off, and you knew things were about to get real.  From this point on, it was running zombies (before running zombies were cool) and zeds talking on CBs asking for 'more paramedics'.  Brains, baby.  Brains.

DOWN THE ROAD by Bowie Ibarra - Albinoni's Adagio

George Zaragoza pulls out of his apartment complex off of IH-35 near William Cannon in Austin, Texas, and plays Albinoni's Adagio for Strings on his Chevy Cavalier tape player.  The song is used to accentuate the turmoil he sees in the traffic headed out of Austin.

DOWN THE ROAD:  ON THE LAST DAY by Bowie Ibarra - Bread of Life

The title of the story and elements within it were completely inspired by a traditional church song I grew up with called 'Bread of Life'.  The theme of the dead rising from the dead on the last day was the complete theme of the zombie apocalypse in Beeville, Texas, and its fight with the United Nations infiltration of Texas.

Incidentally, the story shares a similar theme as Woodbury in 'The Walking Dead', with the mayor securing the city with the citizenry.  The mayor, however, is not half as sinister as The Governor, but ten times more lascivious.

DOWN THE ROAD:  THE FALL OF AUSTIN

A car chase during the zombie apocalypse?  You betcha.

Two rivals chase each other up IH-35 into downtown Austin in a wild car chase that has shades of 'The Road Warrior' in it.  One of the rivals jumps into a vehicle to find Technotronic's 'Pump up the Jam' in the CD player, and the song plays as the deadly car chase ensues.

This is certainly not a definitive list of zombie movie music outside of the movie's main theme, or music from books.  But its a start.

Let me know a song that has played in the background of a zombie movie, book, or TV show that has added to the ambiance in the comments section below and I'll add it to the blog.

This offer is good FOREVER, so let me know.

And with that, RIP Merle.  You were a sonovabitch, but damn I'd have you on my Zpoc team if you didn't mind hanging out with my Mexican ass.

You can network with Bowie and read about his Tex-Mexploitation stories and check out his book trailers at his personal website, ZombieBloodFights.com.
Posted by Bowie Ibarra at 9:06 PM