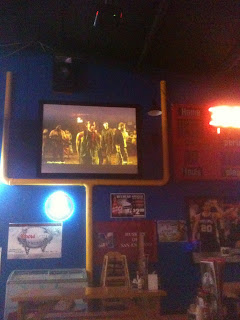 Sideliners in San Antonio was hosting a 'Walking Dead' viewing party. I had no idea, I just needed a place that had a buttload of TVs and hope they would let me watch it on one.  I'm glad I gave Sideliners a chance, because I got to see the second part of season 3 premiere of 'The Walking Dead' there.  Here are some notes from the show.

-- Daryl vs. Merle I
The Governor booked the classic 'brother against brother' matchup for the people of Woodbury, selling out Merle to prove his faith to him by killing Daryl.  Andrea tried to stop it to no avail.  Merle made it look good, but quickly made it clear to Daryl they were breaking out.

Thanks to an assist from the WD Crew fire team, who laid down suppressive fire, the brothers made a break for it.  The chick that gave Andrea a hard time on the wall a few episodes back got plugged as well, much to Andrea's dismay.

-- Andrea outed
Merle reveals to Rick that Andrea is now in The Governor's pocket.  Glenn does not favor keeping Merle around, and neither does Maggie, as you might imagine.  So Daryl gets the choice to stay with the group or go with his brother.  It's an easy choice for him, and Daryl joins his brother to journey into the Zpoc together again.

-- Glenn stomps the s**t out of a Zombie's head
This was a great moment, with Glenn letting off some steam on a zombie that almost jumped him.

-- Some members of the new Prison Population have trust issues
Even thought they are being allowed to bury their killed mate, two members of Tyrese's contingent are having trust issues with the WD Crew. 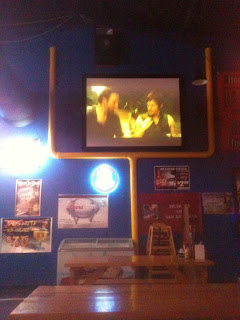 After the debacle at the ZombieBloodFights.com arena, some members of Woodbury want to bail on the town.  They are denied by members of The Governor's death squad.

Having been an articulate orator only days before and still dealing with the death of his zed daughter, Penny, has made The Governor a little disconsolate.  So Andrea steps forth and cuts a promo for the people of Woodbury.  Her stump speech convince people to stick around, and in this moment, a new 'character' seems to emerge:  The People of Woodbury as a collective character.

The problem is that some zeds snuck in from the night before and attacked a member of the community.  This is where Phillip finally appears and shoots the dude in the face in front of the city.

Andrea tries to motivate The Governor to no avail.

-- Rick's remaining team returns
Carol waxes nostalgic about the past, evoking the memory of the Sophie and Lori with Carl.  Its then she gets the news of the departed Daryl from the returning Rick.

Glenn and Maggie keep the violation by The Governor a secret from Hershcel.

Herschel recommends working together with Tyrese and his team.  But when Rick is about to make a call, he is haunted by the memory of Lori, who he sees in a white dress in a stairwell in the prison.  This is the third time Rick has been afflicted with hallucinations.

Lots of fun things getting set up.  We'll see how the rest of the season plays out.

You can network with Bowie and read about his Tex-Mexploitation stories and check out his book trailers at his personal website, ZombieBloodFights.com.
Posted by Bowie Ibarra at 9:34 PM