The first episode of the second part of the third season of 'The Walking Dead' has come and gone, and as we head into the next episode, 'Home', zombie enthusiasts and Walking Dead followers have some wild speculation about what we might see in the coming episodes.

>>>JACKIE DRUGA, author of the Permuted Press title, The Flu
Opinion: Really? Daryl is gone and Rick takes a nosedive in the pool of insanity waving a gun and they push away the only guy (Tyrese) who could do a take down on Rick should he start shooting .

Speculation: Rick leaves and Michonne follows to protect him. Garnishing her group status. Rick leaves to not only find himself but he finds the Dixon brothers in the process. After he meets the governor and discovers his 'whoops my bad' for getting rid of every strong person. Merle will be allowed back.  While Rick's gone, Tyrese helps the prison group when his guys turn on the group.

Wishes: On Talking Dead, Kevin Smith coyly indicted the missteps in writing. My hope is for better writers who actually work and depend on being good writers in this genre. Not just Hollywood writers with a distorted vision of what PA fans want. Kirkman clearly has stepped back. 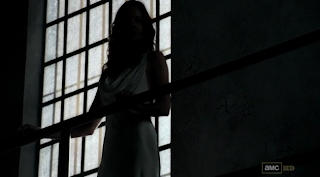 It will be interesting to see how Merle and Daryl discover how each of them has changed.  Having had a strong role within Rick's group, I'm interested to see how Daryl will respond to his big brother's bullshit after growing as a leader.  That will be something to watch for.

I also feel that although the Dixon brothers want to go their own way, something will compel them to return to Rick's team.

I brought it up a few blogs back, but with Lori being mentioned several times during the episode before the big moment when Rick was haunted by her ghost, I still believe we're going to see 'Zombie Lori' sometime soon.

Think about it:  Her body wasn't there when Rick found the place.  The Zed he stabbed all to hell didn't eat her up.  There was evidence of her body being dragged away.  I truly believe she's walking around the prison somewhere, and before the end of the season, Rick is going to have to face her and put her down.

What do YOU think?  What is your 'wild speculation' for the show?  Let us know in the comment section below.

You can network with Bowie and read about his Tex-Mexploitation stories and check out his book trailers at his personal website, ZombieBloodFights.com.
Posted by Bowie Ibarra at 9:11 AM