ZOMBIES: Wild Speculation for the Walking Dead Finale - Will we see Zombie Lori? 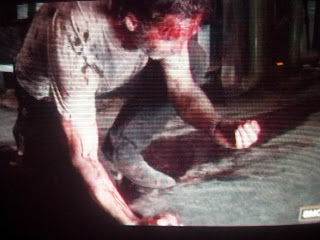 We come back to this picture from the 'Killer Within' episode.  You remember the moment, right?  Where Rick found a bullet that did not seem to have any blood on it.  Then a blood trail away from the apparent scene of the grisly birth and subsequent 'death' of Lori.

Well, ZombieBloodFights.com speculated wildly that perhaps we would find Carol had found a dying Lori and stitched her up.  Well, since then, Carol has been found, with still no sign of Lori.  We're led to believe that the fat zombie ate her up completely:  bones, skull, and all.

So here's this weeks ZombieBloodFights.com Wild Speculation:  Will the season finale feature a Zombie Lori?  A revelation that though Carl insisted he shot his mother in the face after turning, a murder we did not see happen with our own eyes, that he did not, in fact, kill his mother. 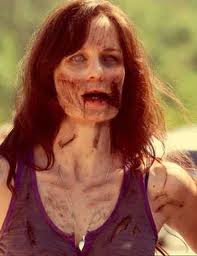 Let's see what happens in the mid-season finale (Damn you, Walking Dead)!

You can network with Bowie and read about his Tex-Mexploitation stories at his personal website, ZombieBloodFights.com.
Posted by Bowie Ibarra at 7:04 PM